(WSCR) The bye week is over and the Bears are getting back to business. Let's see what's on your mind as the Bears get ready for a big matchup with the Eagles:

Laurence, How does an NFL team get an offensive play called and get the right personnel on the field to execute the play? Seems like a lot to get precisely correct in a short time.  - David Skudlarek

Well, David, that's why they work so hard in training camp and weekly practices. Basically,  the players are drilled on what personnel grouping goes with what play. What teams do is that the personnel grouping is called out becore the play. As an example: If the Bears want to show a short-yardage look, they may call for a "Rhino" (my words, not theirs) package. So all three tight ends know that they're supposed to be in the huddle.

Those players are responsible for a bunch of different plays and techniques in the "Rhino" package. Then Mike Martz will call the play. The play goes from Martz to quarterback coach Shane Day, who then relays it to Jay Cutler. Cutler will let the other guys know the play, protection, formation, motion and snap count. It's a lot to do in :40, but for the most part it gets done. It's an interesting process and the Bears have come under a lot of criticism (myself included) because sometimes they don't look very fluid and you wonder if they could cut down the amount of wasted seconds.

Hey Holmes, What formations or type of plays can we expect the Bears to employ to beat the Eagles' Wide-9? -   Frankie, Orlando

Frankie, this is one of the most intriguing questions of this Bears-Eagles matchup. The Wide-9 technique means that the defensive ends will line up far outside the offensive tackles. Here is a diagram. 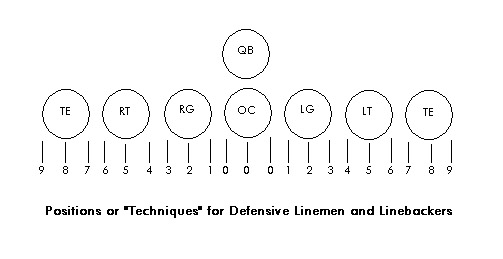 The idea is to use speed to get angles, force the action and get pressure. If you have speed rushers, like the Eagles do with Trent Cole and Jason Babin, it can be very effective. In fact, Detroit used this technique to disrupt the Bears timing offensively with pretty good success. I talked with a couple of Bears players about this on Tuesday and they know the Eagles have probably studied that tape. The Martz offense, which has a lot of deep drops, is suceptible to the Wide-9 technique. Basically the outside guys know where the QB is going to be and it becomes a race to get to that point on the field. If your tackles aren't athletic enough, it makes for a hard day for your quarterback. The other thing to keep in mind is that this game is on the road and every tenth of a second counts when you're trying to combat speed. In Detroit, the Bears struggled with this.

While the Wide-9 is trending around the league as kind of a fad, it isn't the end all, be all. It has some weaknesses. The wide splits of the defense make it so there is a some built in seams for the offense to exploit in the running game. To do it right, you need athletic space-eaters at your DT spot. Cullen Jenkins fits that description.

The Eagles linebackers are going have to come up and make tackles. The Bears have a back in Matt Forte that can make people miss and if the Bears can make just enough pass plays against this look, they can put pressure on Philly to come out of it. I know I took a long route to answer your question, but trap plays and draws out of pass-look formations make a lot of sense to me. It's going to be a fascinating chess match.

With Earl Bennett returning, is there a chance he lines up outside more, taking away snaps from the other receivers, because of the emergence of Dane Sanzenbacher in the slot? - Rob Perry, Woodridge

Earl Bennett is the Bears' best all-around receiver. Having him on the field can only help the offense. Sanzenbacher has done well for an undrafted rookie, but he still isn't a finished product. In fact, he's tied for sixth in the NFL with five drops this season. He'll get some snaps, but the Bears are better served to have Bennett on the field more. The reason is that Bennett has proven to be a tough inside receiver. Jay Cutler has gone out of his way to talk about how he always knows where Bennett is going to be and when plays breakdown, Bennett understands how to work back to Cutler or to streak towards the endzone.

With the impending return of a healthy Gabe Carimi, is there any justification besides draft position to not bench Chris Williams, and line up with Webb, Spencer, Garza, Louis and Carimi from left to right? - Greg Dittburner, Park Ridge

I'm not convinced that Carimi is 100 percent healthy. He is still wearing a big brace on his right knee. He said yesterday that the knee cap is stable and that the pain is minimal, but I have some doubts. The Bears have been very happy with the latest configuration of the line. I'm not sure it makes sense to re-insert Carimi for a road game against a team that uses a speed rush (Wide-9) to attack the tackles. The coaches have been impressed with Louis at tackle. Yes, they will still give some help with a tight end or a back chipping, but overall, they believe he's done the job. The Bears like continuity on their line and I don't suspect they'll make a change right away unless Louis is ineffective. Overall, I think Carimi is the best prospect on the line, but the Bears aren't in a development stage. Every game counts, and Monday is HUGE. I think working him back in slowly with some unbalanced line stuff is a good idea, but giving him the start isn't.