After every game, Adam Hoge reviews the film and highlights the best and worst performances while also providing some observations.

(CBS) It wasn't exactly how the Bears usually do it, but they finally got pressure on the quarterback Sunday night in Pittsburgh.

Defensive coordinator Mel Tucker cranked up the blitzes, which helped the Bears force five takeaways on the night.

Of course, the blitzes also left holes in the defense, which allowed Ben Roethlisberger to throw for 406 yards. Both of his touchdown tosses came against the blitz as well.

That said, the blitzing helped the Bears a lot more than it hurt. Head coach Marc Trestman said they blitzed about a third of the time, which was up from around 25 percent of the time in the first two weeks. Maybe Tucker felt like he had to be more aggressive because his defensive line wasn't creating enough pressure, or maybe he just saw a weakness in the Steelers' offensive line. Either way, it worked.

Many times throughout the night, the Bears' defensive ends sacrificed themselves with an inside rush to create a lane for the blitzer. Here's a good example of that using the NFL Game Rewind All-22 film: 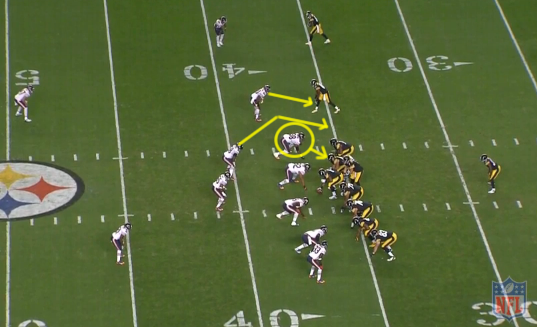 Corey Wootton is the left defensive end and he is going to rush to the inside shoulder of the right tackle as both James Anderson and D.J. Williams blitz on the outside of him. Here's another pre-snap look from the end zone: 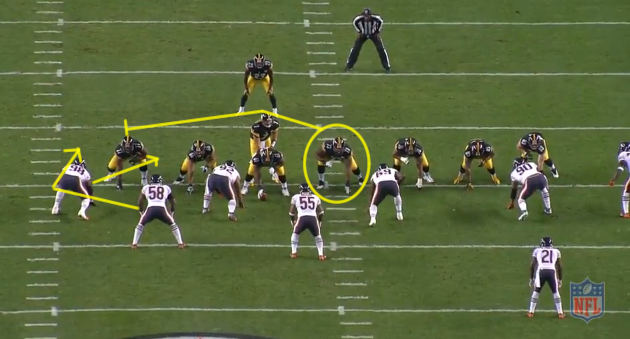 The left guard is going pull to help sell the play-action and also pick up any extra pressure, but Wootton's stunt proves to be the difference maker on this play. 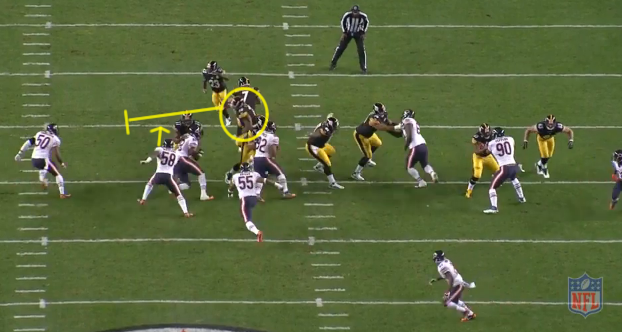 The left guard is circled here to show his pulling action, but if you look closely, D.J. Williams uses Wootton perfectly as a screen. The guard can only see the blitz by Anderson, so he goes to block him despite the running back being available to put up the blitz as well. 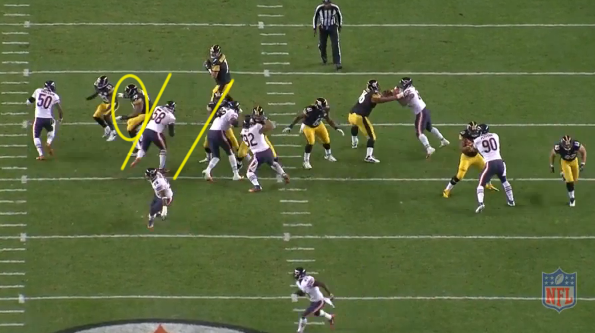 That leaves two guys on Anderson, and with Wootton holding the tackle, Williams has a free lane to the quarterback. He sacks Roethlisberger, strips him and the Bears recover the fumble to help jump out to a 10-0 lead.

Plays like this are why the Bears' defensive line graded out well Sunday night despite the linebackers putting up most of the numbers. Here's a look at the key performers on the night:

RG Kyle Long - The rookie graded out as my highest rated Bear and has improved each of the last two weeks after a shaky debut in Week 1. I only had him down for two negative plays on a night where he made seven above-average blocks and showed rare punch on a crushing block that helped spring Matt Forte for a 55-yard run in the first quarter.

RB Matt Forte - That long run by Forte had everything. He used his speed to burst through the hole, balance to stay on his feet when he got hit on the second level and then strength to slip a tackle and stay in-bounds down the field. While the officials eventually ruled him out at the five yard line, I'm not so sure he was actually out. Unfortunately, Forte only had 32 additional yards on 15 other carries on the night, but the biggest reason why he graded out so high was because he put on a blocking clinic and played a huge role in diminishing the effectiveness of the Steelers' zone blitz.

LT Jermon Bushrod - It was just a solid all-around night for the left tackle, who only graded down twice and kept Jay Cutler's backside clean for most of the game. Bushrod has put together two good games in a row, including last week's against Jared Allen.

DE Corey Wootton - Sunday was by far Wootton's best game of the season. He was only credited for two tackles, one quarterback hurry and a pass defended, but when you throw in plays like the one shown in the All-22 images above, that's an all-around good game for a defensive end.

DE Julius Peppers - It was still far from a classic Julius Peppers performance, but it was a much-improved outing. He only was credited with one tackle, but I counted three plays in which he gave himself up to create a lane for a blitzer. Defenses are still worried about him. On Major Wright's interception, Peppers completely confused the left tackle by running an inside stunt, which allowed Henry Melton to go free to the quarterback. Peppers also would have had a TFL on Felix Jones had he not been pulled down from behind on a hold that was missed by the referees. I will admit, however, that he still seems a step slow. There were two instances when he had a chance to bring Roethlisberger down and just didn't quite get there. Those are plays he usually makes.

CB Charles Tillman - The veteran cornerback accounted for the lowest grade on the team Sunday night, but it was certainly excusable. Tillman played through a knee injury and also suffered a sore groin in the game.

S Anthony Walters - Walters only sees the field on special teams, but his roughing the punter penalty that led to a Steelers' touchdown was enough to put him among the lowest grades on the day.

CB Zack Bowman - Bowman missed a special teams tackle and also gave up a completion when he filled in for Tillman in the fourth quarter.

TE Martellus Bennett - Bennett appears among the lowest grades because of a few missed blocks, including a sack allowed, but it's important to remember he was playing through a shoulder injury. He also had three positive plays on the day, including when he caught a short pass and eluded at least three tacklers for a gain of nine.

LB Lance Briggs - The linebacker actually made a lot of nice plays in Sunday's game, but he also had a rough night in pass coverage, which is why he ended up with a negative grade overall.

- Right tackle Jordan Mills had the second-most negative plays on the night, but he did enough good to finish with a positive grade overall. His block on Matt Forte's touchdown run was a rare-level play. He pushed his guy straight backwards five yards.

- Linebackers James Anderson and D.J. Williams both finished with positive grades. Anderson had a crushing block to spring Major Wright on his interception return for a touchdown.

- Henry Melton was having his best game of the season before he suffered a torn ACL in the fourth quarter.

- Upon further review, Jay Cutler was right when he said he got the ball to Earl Bennett a touch late on the game-winning touchdown. Bennett beat his man badly off the line of scrimmage and it wouldn't have been as close as it was had Cutler thrown the ball right away.

- On the 3rd-and-1 that Marc Trestman later admitted he should have called a run play on, fullback Tony Fiammetta bulldozed Troy Polamalu and was open in the flat. For some reason, Chris Collinsworth said on the broadcast that Polamalu took Fiammetta out of the play, but I'm not sure what he was watching. Martellus Bennett also appeared to be open briefly, but Cutler went for the deep look to Brandon Marshall and the pass was incomplete.