(CBS) -- On the fourth play of the Bears' second drive Sunday, wide receiver Alshon Jeffery went in motion and took the handoff from quarterback Jay Cutler.

By now, he's used to doing this. The play 670 The Score host Matt Spiegel dubbed the "Alshon-around" has been run by the Bears 15 times this season for a total of 101 yards, an average of 6.73 yards per carry (this doesn't include a four-yard gain against the Rams that was called back by a  holding penalty).

Against the Vikings in Week 2, Jeffery gained 38 yards on an end-around. A week later, he picked up 27 yards against the Lions. Two weeks after that, the play was successful for a 15-yard gain against the Giants.

But lately, the play has gone nowhere. And Sunday was no exception. Jeffery took the handoff from right to left and ran into a wall of three Cleveland Browns, losing three yards on the play.

Immediately, Twitter exploded with complaints from fans who are tired of seeing the play getting stopped. On the surface, you can't blame them. In the last seven games, the Bears have only gained a total of 13 yards on nine "Alshon-arounds", an average of just 1.44 yards per carry. On top of that, Tony Fiammetta was called for a holding penalty on one in St. Louis that's not even included in that total.

(Interesting side note: the Bears have run Jeffery to the left 10 times for 97 yards (9.7 yards/carry) and to the right five times for just four yards (0.8 yards/carry.) The first eight Jeffery runs this season went to the left, while five of the last seven have been to the right.)

So time to ditch the play, right?

While defenses have been able to diagnose the play on film and stop it during games, they haven't been able to stop what the Bears are countering with. Against the Cowboys in Week 14, Jeffery was dropped for a 7-yard loss on an end-around to the right, but later in the game, running back Matt Forte scored a touchdown when the Bears faked the handoff to Jeffery first.

Sunday, Jeffery was dropped for a 3-yard loss, but later in the game, head coach Marc Trestman used the fake "Alshon-around" to pick up 19 yards with Matt Forte in the fourth quarter to set up the Bears' go-ahead touchdown. Then, on the next drive, he called the exact same play and it went for 24 yards. In fact, the Bears ran the exact same play three times in the game, as Michael Bush picked up 15-yards on it in the third quarter, but it was called back because Jeffery was called for illegal motion.

So what does the play look like? It's pretty simple if you have wide receivers who can block and offensive linemen athletic enough to pull to the outside and get downfield. 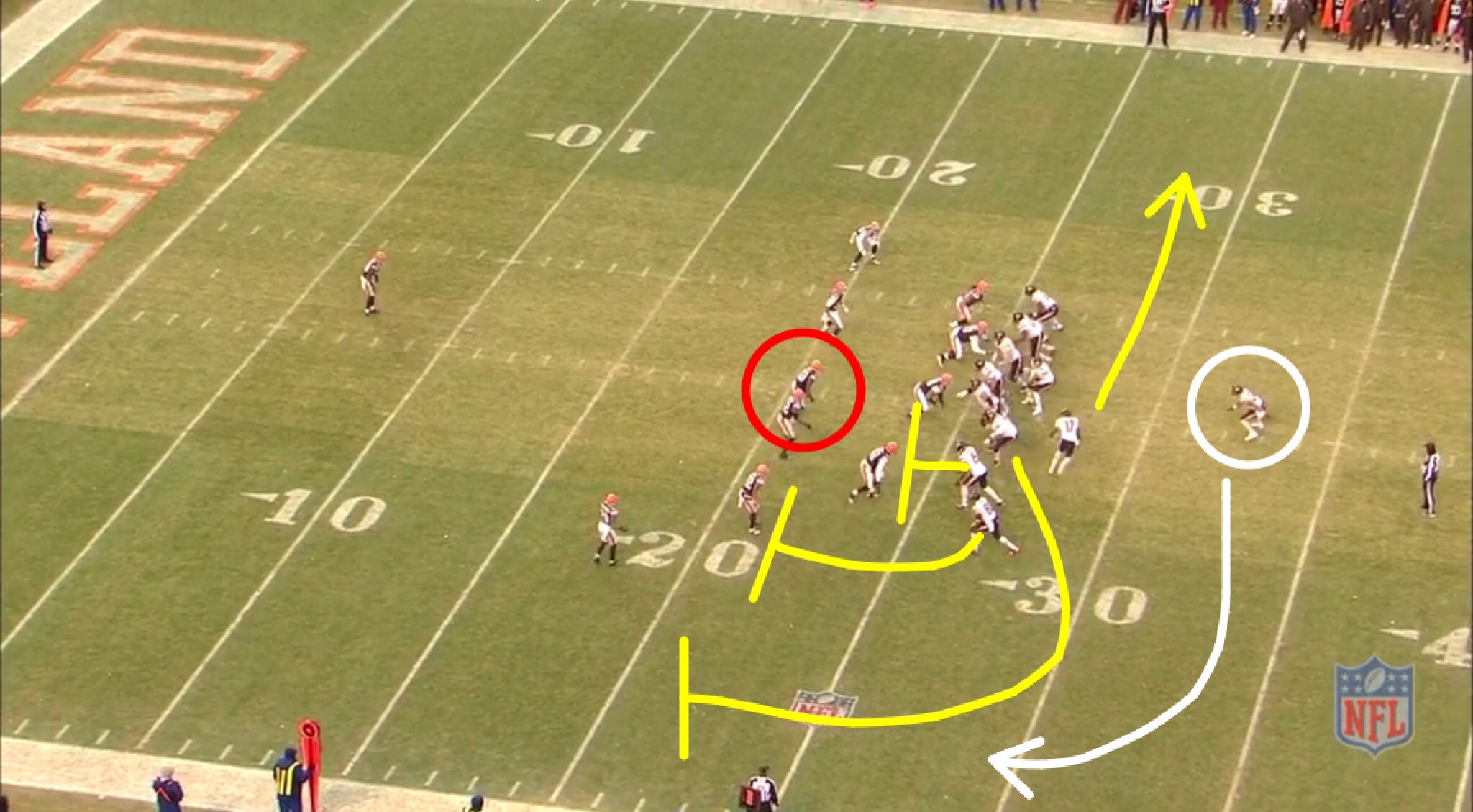 Jeffery's motion from left to right in the backfield holds the linebackers (circled in red). That gives the Bears the blocking numbers on the outside. Wide receiver Brandon Marshall (lined up just to the left of the offensive line) seals the defensive end, while wide receiver Earl Bennett gets the first block downfield. Offensive tackle Jermon Bushrod pulls to the outside to block too. And, as you can see below, the interior linemen also create an inside seal: 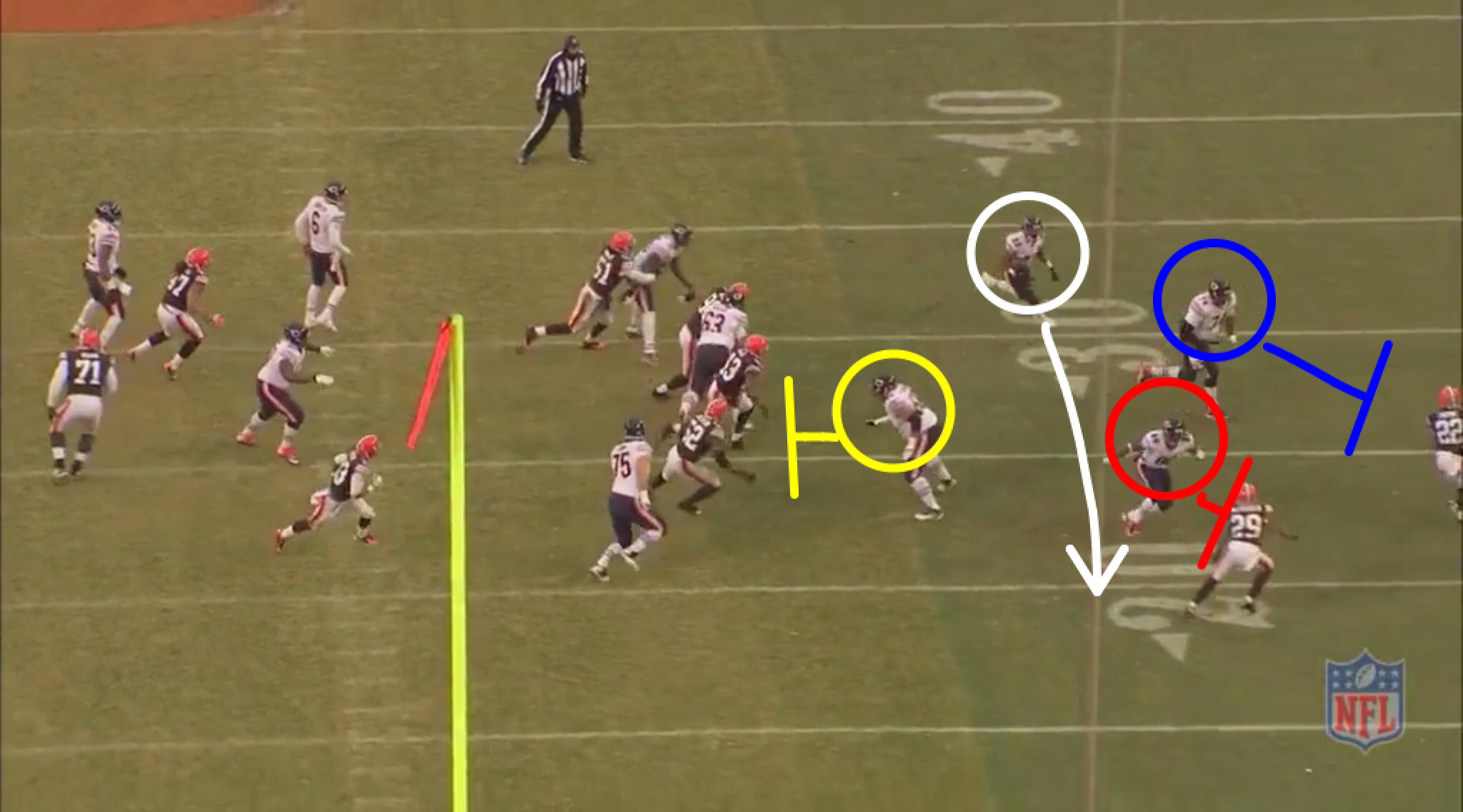 Right guard Matt Slauson is circled in yellow, Bennett is in red and Bushrod is in blue.  On this play, Forte picks up 19 yards.

So the next time you see an "Alshon-around" go nowhere, just be patient. There's a good chance it will pay off later in the game.

On to my grades from Sunday's game, after watching the coaches' film:

LT Jermon Bushrod - It was a perfect game for Bushrod, who did not allow a single pressure and posted his highest grade of the season. Since a rough game in St. Louis, the left tackle has bounced back with three strong performances in a row.

WR Brandon Marshall - The wide receiver hasn't had a negative grade all season and has been especially good the last four weeks. It's getting redundant, but his blocking is just as good as his receiving.

DT Jeremiah Ratliff - This is an important development for the Bears, who are getting much more than they could have expected from the veteran defensive tackle coming off a serious groin injury. Ratliff was brought in to play three-technique, but with Stephen Paea limited with turf toe, he played a lot of nose tackle Sunday and did it well. He consistently showed great power and athleticism to get into the backfield.

LG Matt Slauson - Still quietly getting it done, Slauson is probably the most under appreciated player on the Bears' roster.

WR Alshon Jeffery - Another week, another insane touchdown grab. His blocking, which has been somewhat shaky recently, was better too.

MLB Jonathan Bostic - None of these five players had really poor games, but they did grade out negatively -- just barely. Bostic was one of those players. While he showed an improvement in the run games -- specifically shedding blocks -- he still can be better at diagnosing plays, specifically in the pass game.

RG Kyle Long - It's surprising to see Long on this list as he has the highest overall grade among Bears offensive linemen this season, but Sunday was not his best performance. He allowed a few pressures and also had a complete whiff of a run block on Paul Kruger, who ended up with a TFL on the play. Long did bounce back, however, with a powerful block on Browns nose tackle Phil Taylor on Michael Bush's 40-yard touchdown run.

DE Shea McClellin - The lack of impact plays and one or two bad plays each game is what attracts the critics to McClellin. This would be a perfect example (MarQueis Gray, circled in yellow, has the ball): 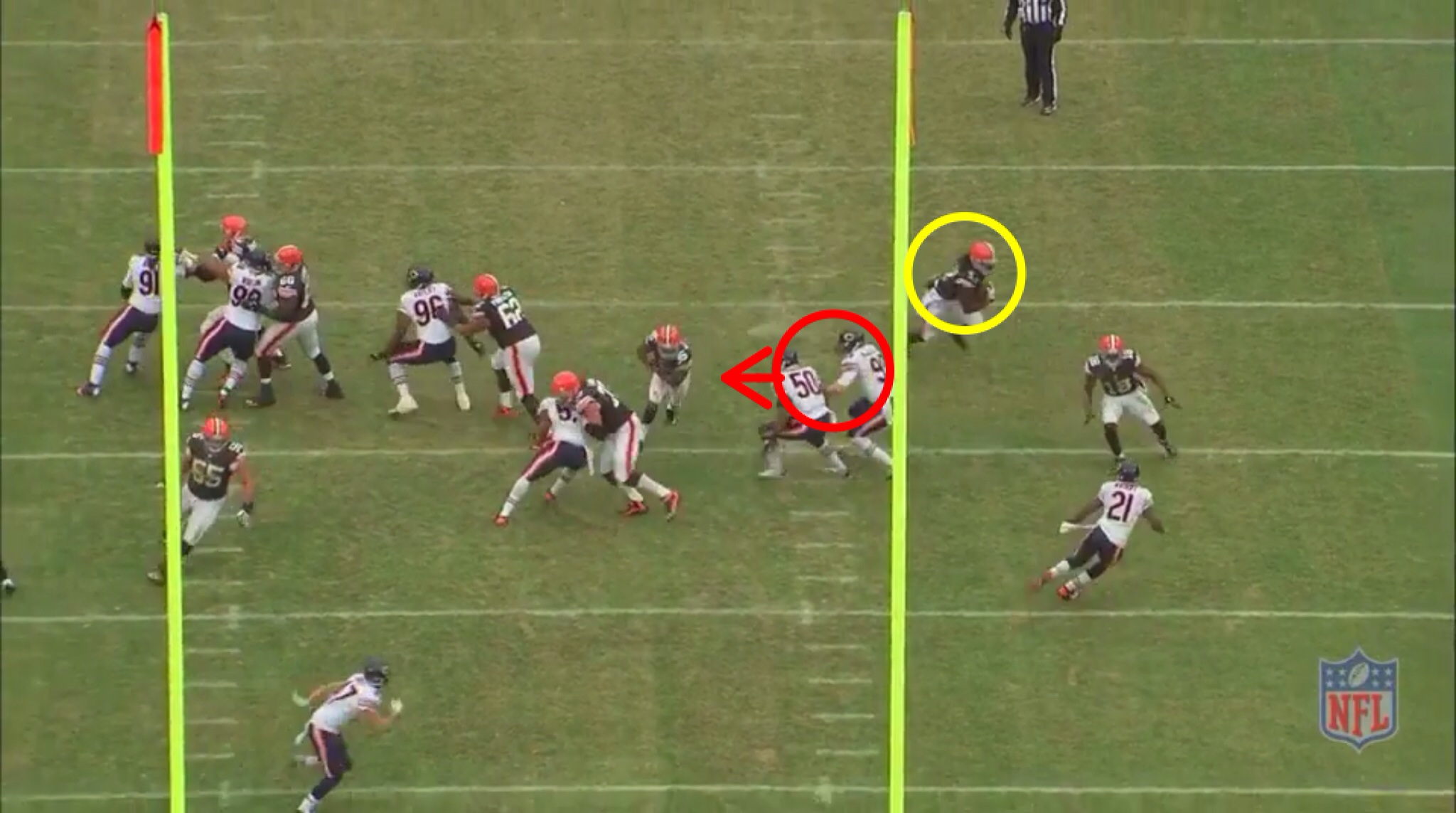 DE Corey Wootton - After not posting a single negative grade in the first 10 games of the season, Wootton now has three in his last four. He's still not in the fairest of positions having to constantly rotate between defensive end and defensive tackle, but he was still being much more productive earlier in the season.

S Major Wright - Thirteen games, nine negative grades. It's been tough season for the safety, who is in the last year of his rookie contract.

- The play shown above with McClellin and James Anderson following the wrong ballcarrier was the second of back-to-back direct snaps to Gray. The first one also had a fake handoff, but was also blocked extremely well: 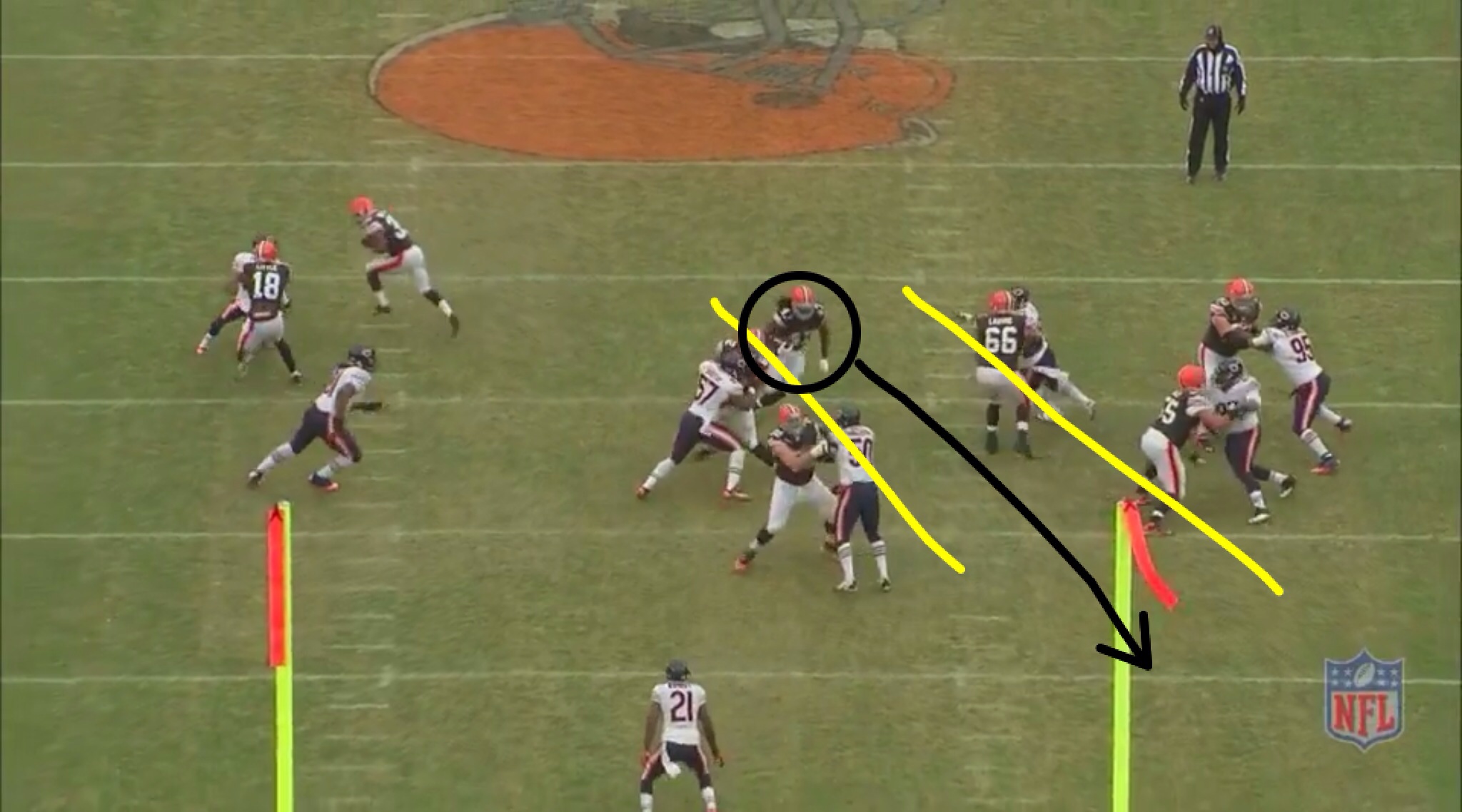 - Speaking of good blocking, you can't do it much better than the Bears did on Michael Bush's 40-yard touchdown run to ice the game. Bush deserves credit for his cutback too, which caused this to happen to Browns linebacker D'Qwell Jackson (circled in red): 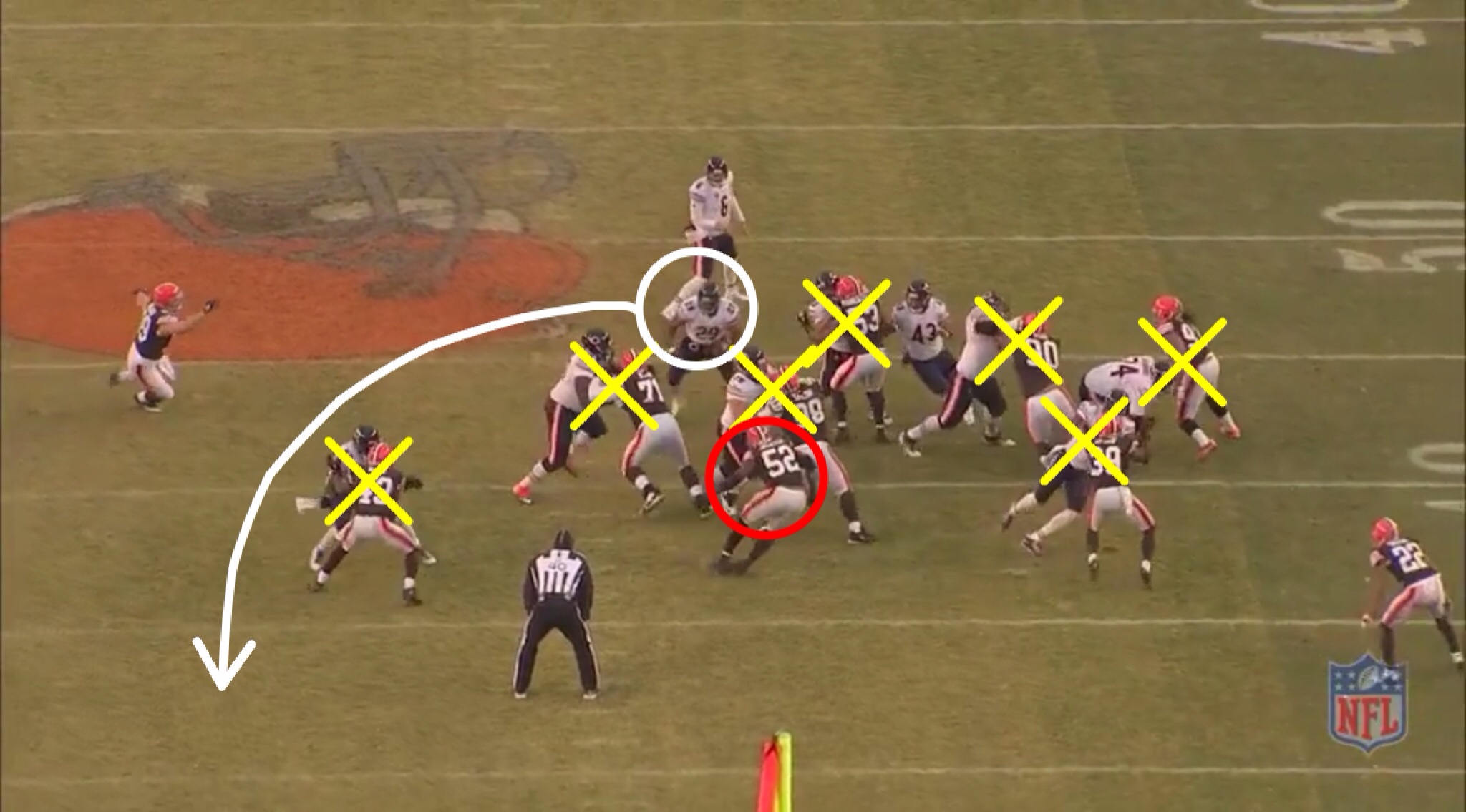