(CBS) — This may surprise you, but the Bears' defense actually made some progress in Sunday's 23-20 overtime loss to the Vikings.

Sure, they gave up 246 rushing yards, but the unit also forced four straight punts to start the game and gave the offense a chance to put a bad team away early. The problem is, the offense only put up three points following those four punts and the defense couldn't hold the momentum it established early in the game.

Still, the tape shows a lot of positives for the defense in the first quarter. Last week, I wrote about how the unit was becoming predictable, but there was nothing predictable about what defensive coordinator Mel Tucker called early in Sunday's game.

With the Bears loading up in the box to stop Adrian Peterson, safety Craig Steltz -- who was filling in for the injured Major Wright -- lined up a lot like a linebacker and blitzed frequently early. Both the way in which Steltz was used and the way he performed early in the game was impressive given that Wright didn't suffer his hamstring pull until Friday.

Here are two examples of how Steltz lined up. The first is a base defense look with Steltz in the box, making it a 4-4 front: 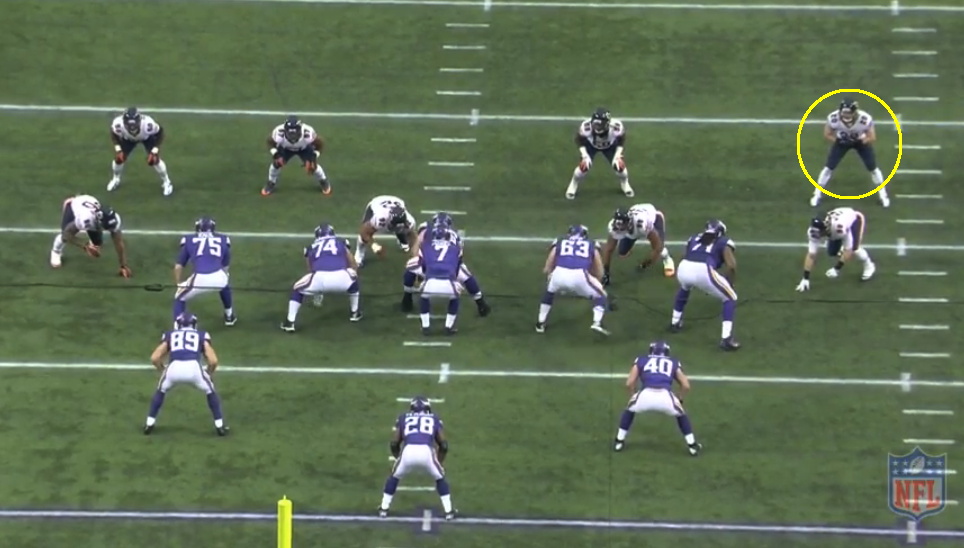 The next is in nickel, but the front looks like a 4-3 with Steltz lined up next to both linebackers:

This isn't necessarily unique for 4-3 defenses bringing eight in the box, but Tucker did show some unique -- or at least less predictable -- wrinkles early in the game, specifically on three third down calls that results in sacks. Those sacks ended each of the Vikings' first three drives of the game.

Here's a look at how the Bears lined up and executed the first sack. As you can see, Tucker has seven players on the line of scrimmage, while the Vikings have seven available blockers. The Bears run a stunt with Julius Peppers (circled in red), thus I've diagramed this as if the rest of the Bears players are blocking the Vikings' blockers in order to free up Peppers. Linebacker Jonathan Bostic actually drops back into coverage, which gives the Vikings a 7-on-6 advantage, but the stunt creates confusion and gives the Bears the edge. The key players to watch (circled in yellow) are left tackle Matt Kahil and wide receiver Joe Webb, who is lined up in the backfield. 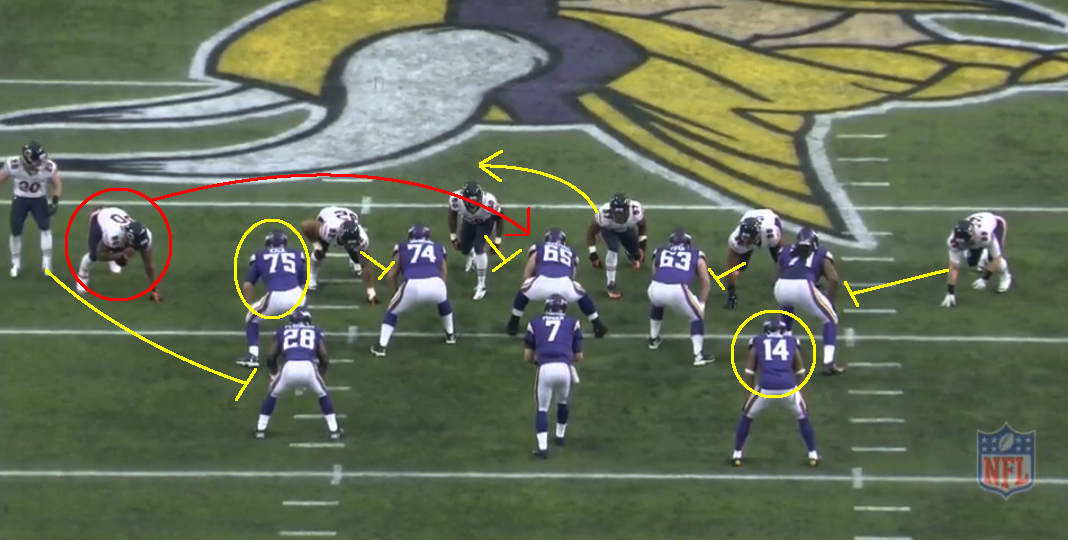 Because Peppers runs a stunt underneath, Kalil is left with no one to block. Thus, left guard Charlie Johnson and center John Sullivan had to pass their assignments off to the left to allow Sullivan to take Peppers in the middle, or Webb needed to serve as the blocker. Of course, that's not a typical assignment for a wide receiver like Webb in the backfield, which might be why the Bears ran this particular play. Webb's assignment is to run a route and because Kalil, Johnson and Sullivan don't account for the stunt, Peppers has a free lane to Christian Ponder and completes the sack. 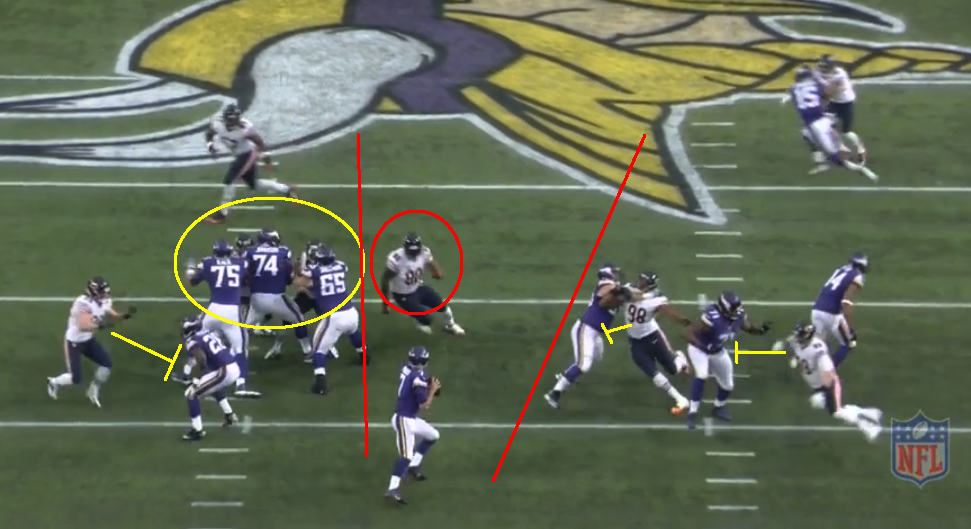 The second sack isn't much different, but Tucker's call does account for the Vikings making an adjustment. The alignment is slightly different with only six on the line of scrimmage and Bostic and Anderson switched. Bostic drops back in coverage again, but this time, so does McClellin. Meanwhile, Peppers runs the same stunt, with Isaiah Frey blitzing from the left. Keep an eye on how the Vikings' left side of the line adjusts to the stunt, as well as Adrian Peterson, who serves as the second possible blocker in the backfield. 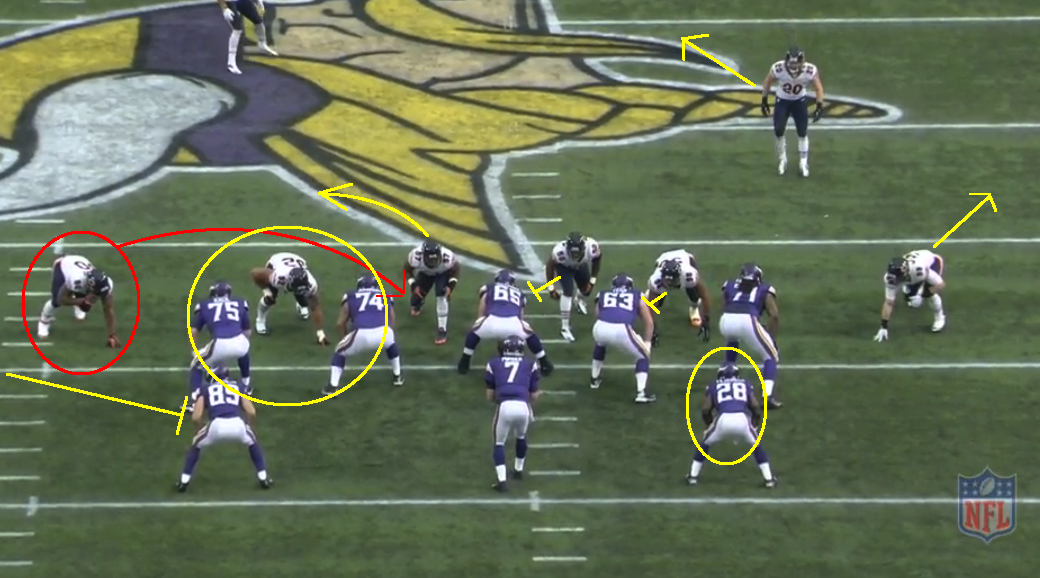 As you can see below, Peterson runs a route and does not block, but the Vikings still have a 6-on-5 numbers advantage with Bostic and McClellin dropping into coverage. The Vikings handle the stunt better, but not well enough. With Peppers pulling underneath, Kalil and Johnson initially double Paea, but Sullivan then picks up Peppers as he comes around. As soon as Kalil loses his help though, Paea breaks free and has a straight shot at Ponder.  He and Frey end up combining on the sack. 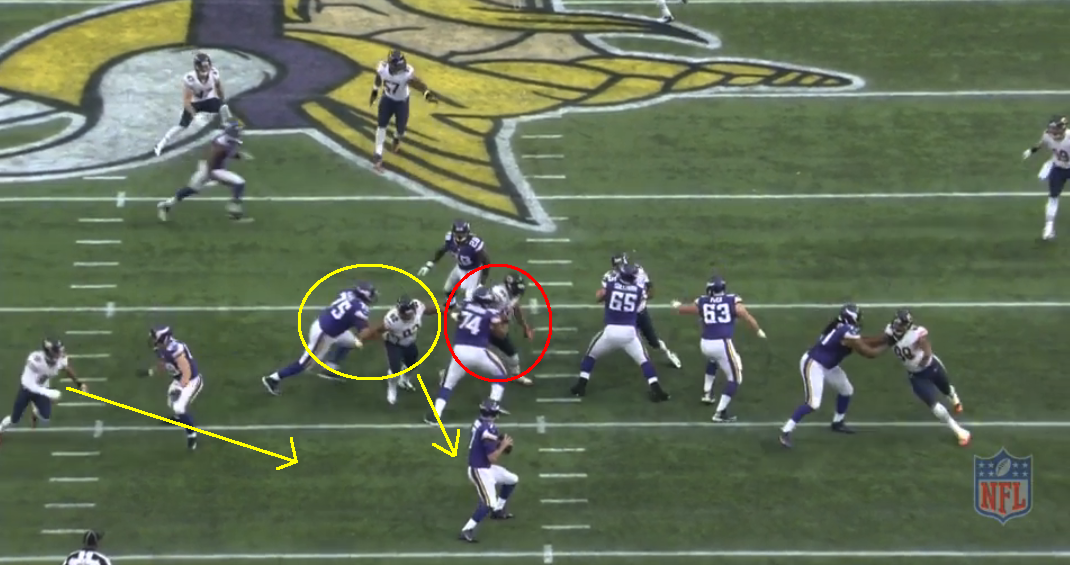 The third sack also has a loaded front look, but the Bears once again do something different out of it. This time, both linebackers and Steltz drop back into coverage, which leaves the Bears just rushing four. Peppers is lined up in the 3-technique, not at defensive end, and he ends up with a 1-on-1 matchup because the Vikings are concerned about the possible blitzers, all of which drop back into coverage. Sullivan goes to his right where three Vikings are blocking two Bears, and Kalil goes left in case Steltz comes. Because Steltz does not blitz, Kalil is left blocking no one and Peppers has a 1-on-1 rush with Johnson, a battle he'll win most of the time and does. 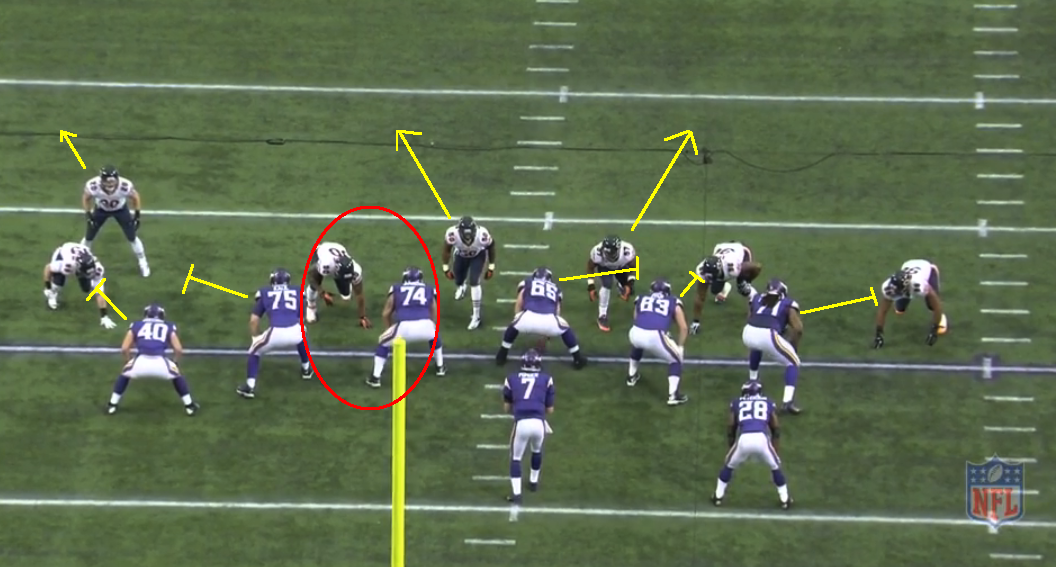 Of course, all of these calls were possible because the Bears' run defense was good enough early to put the Vikings in obvious passing situations on 3rd-and-long. The Bears ended up with five sacks on the game, but once the run defense started to falter later in the game, these opportunities were harder to come by.

WR Alshon Jeffery — Not surprisingly, Jeffery notched his best grade of the season after breaking his own franchise receiving record with 249 yards on 12 catches. His 46-yard touchdown catch might have been the best catch in the NFL this season.

DE Julius Peppers — You never know which Julius Peppers you are going to get each week this season, but he had a great game, recording 2.5 sacks, two TFLs and three quarterback hurries. Believe it or not, Peppers was especially good against the run.

DE Corey Wootton — With Jeremiah Ratliff contributing 23 snaps insides, Wootton split his time between tackle and end and had a solid game. He batted two passes down at the line of scrimmage and had a TFL and 0.5 sacks.

RB Matt Forte — Just another all around good game for the Bears' running back, who has positive grades in 10 of 12 games this season. The Bears committed to the run Sunday and Forte came through with 120 yards on 23 carries.

DT Stephen Paea — The Bears still weren't great against the run Sunday, but they are considerably better when Paea is playing. He had half a sack and also batted two passes down at the line of scrimmage.

RT Jordan Mills - It's been back-to-back tough weeks for the rookie right tackle, who allowed seven pressures and the crucial sack on first down when the Bears got the ball back at mid-field in the final seconds of the fourth quarter. He's also lucky he wasn't called for a hold on Jeffery's incredible 46-yard touchdown catch.

C Roberto Garza - The center started off the season really well with positive grades in each of the five games. Maybe the wear and tear is getting to him as he now has five negatives grades in the last seven games. The low shotgun snaps are troublesome and becoming a trend.

S Chris Conte - The horse collar tackle in overtime was a killer, even though he was bailed out by the Vikings failing to convert the field goal. The safety has been better in recent weeks, but still posted a red number Sunday.

MLB Jonathan Bostic - Another week with a lot of good and a lot of bad. The problem is, the bad is resulted in big plays. The potential is there, but it's obvious why the Bears weren't planning on playing Bostic this much this season.

S Craig Steltz - The backup safety had a great start filing in for the injured Major Wright, but the Vikings took advantage of him late in the game, finding holes in the secondary to key their comeback. Steltz didn't necessarily play worse than Wright, but he also probably didn't do enough to take over the job either.