The Redskins' defense has plenty of star power, but as unit? Not that good.

And most importantly, the Redskins are 27th in the NFL in points allowed, giving up 28.6 a game.

The five guys mentioned above are certainly good players, but five guys don't make up a defense and the Bears should be able to move the ball Sunday against the Redskins' 3-4 scheme.

Bears' head coach Marc Trestman said this week that the Redskins play "a little more true 3-4" and referred to their front as "double-bubble" where the offensive guards are uncovered and the center is left on an island with the nose guard.

"It just makes it more difficult at times when there's two bubbles over both guards," Trestman said. "There's more flexibility you have to have with your protection package to be able to get everybody blocked and take care of the most dangerous rushers."

In the Redskins' case, the most dangerous rushers are outside linebackers Ryan Kerrigan and Brian Orakpo, who "you can't block with a running back," according to Trestman.

"You've got to block them with linemen, big people, and that exposes the internal areas, allows them to internally blitz and make some things happen," the head coach said.

Unlike the Steelers and Saints -- two 30 fronts the Bears have already faced this season -- the Redskins don't use a lot of variation in their formation from play-to-play. A typical base formation looks like this, with Kerrigan and Orakpo close to the line of scrimmage in what looks more like a 5-2 front: 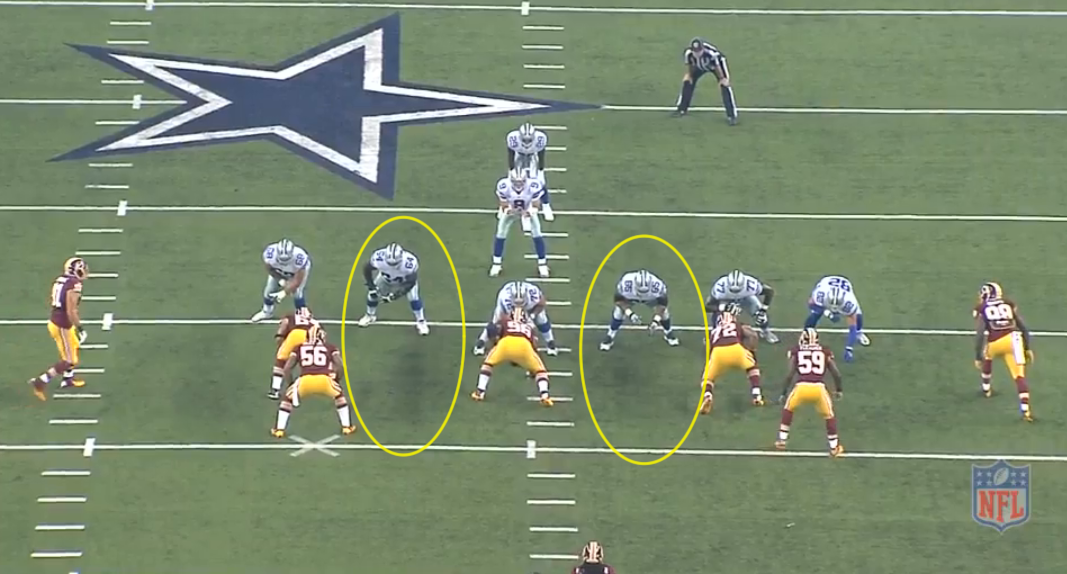 As you can see, the "bubbles" over the guards are circled.

In nickel situations, the Redskins will go 2-4-5 with defensive end Kedric Golston subbing out and nose guard Barry Cofield shifting over into a one-technique like a 4-3 nose guard would. In fact, the Redskins' front looks a lot like a 40 front in nickel situations, except Kerrigan and Orakpo are often in a two-point stance (Kerrigan will sometimes put his hand on the ground). Here's a look at a typical nickel formation: 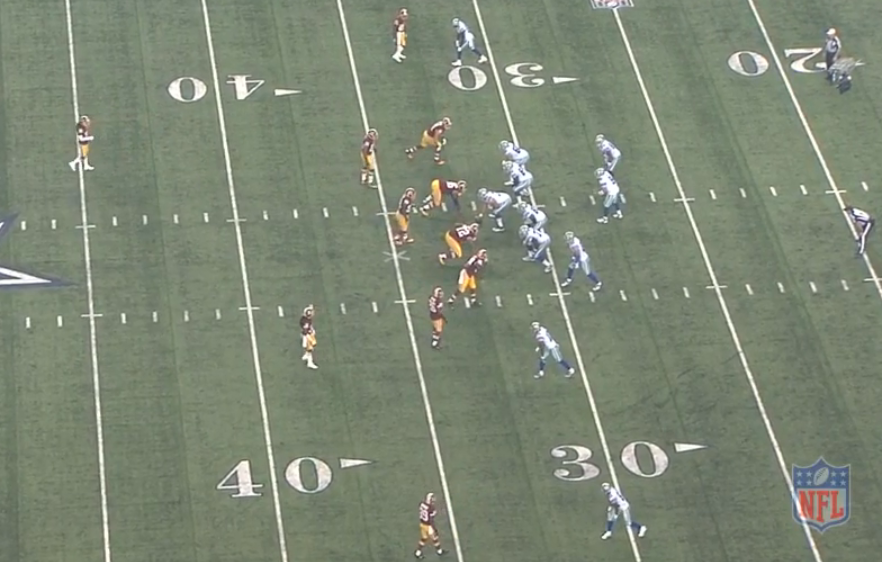 Like most 3-4s, it all starts up front with the nose guard and Cofield isn't your typical nose.

"He's not just a nose, a two-gap nose, he's a pass-rushing defensive lineman and that makes it even more significant because he gets on the edge and we have to make sure we do the things necessary to give Roberto (Garza) help inside," Trestman said.

Indeed, this will be an important game for the aging Garza, who is having somewhat of a resurgent season, but struggled last week against the Giants. Bears offensive coordinator Aaron Kromer said Cofield appears to have lost weight and "is much more active than he was in the last couple years."

"He is very impressive on tape for a nose guard," Kromer said.

What makes Cofield different is that he's not a typical gap plugger. He has a good club move and can get upfield and put pressure on the quarterback.

"He'll step one way and knock you out of the way with the club move," Kromer said. "So we have to do a good job of staying tight on him at guard."

Of course, that makes it hard to account for both the end and the rushing linebacker, which Trestman said needs to be blocked by "big people". Thus, expect to see more Eben Britton near the line of scrimmage to provide help.

As for blitzes, the Redskins don't blitz a lot, but when they do, defensive coordinator Jim Haslett likes to bring more than one at a time. Cornerback Josh Wilson is especially worth keeping an eye on, as he has the highest pass rush productivity among all cornerbacks, according to Pro Football Focus.

But the Bears have the personnel to stop the Redskins front, and if they do that, the secondary is vulnerable.

Cornerback DeAngelo Hall is a playmaker, but he's not exactly an elite cornerback and the Bears didn't have Brandon Marshall, Alshon Jeffery and Martellus Bennett in 2010 when Hall picked off Jay Cutler four times.

The Redskins secondary has been vulnerable on deep passes to the middle and right side of the field, and the Bears should be able to take advantage of that with tight end Martellus Bennett. Washington is allowing opponents to complete over 61 percent of their passes to the deep middle and Bennett will have a significant height advantage over 5-10 linebacker London Fletcher, who typically draws the tight end assignment.

The Bears might also be able to take advantage of a matchup in the running game as the Washington defense is allowing 7.53 yards per carry on runs off right guard. The Bears, meanwhile, are most successful running behind right guard Kyle Long, gaining 6.0 yards per carry when they do so. Most of their runs have gone in that direction (34 to be exact), with the second most going off left end (26) with an extra blocker to that side or left tackle Jermon Bushrod kicking out that way.

So while the Redskins' defense has its fair share of playmakers, it also has plenty of holes.

Holes the Bears should be able to exploit Sunday.