HALAS HALL (CBS) Last week it was the Steelers' 3-4 zone blitz. This week it's the Lions' wide-9 technique.

So it goes in the NFL, where defensive coordinators are adapting to the pass-happy culture that has exploded over the last decade.

"Each week we're facing a different style of front," Bears offensive coordinator Aaron Kromer said Thursday. "This one will be different, with the wide-9 technique that the Detroit Lions choose to play, and their two first-round tackles inside. They put an extra safety inside the defensive ends, which is a little unusual. So another challenge for a new group of linemen and a fullback. We're practicing and we're working on it and we need improvement."

The wide-9 is not new, but the Lions use it more than most teams. It refers to the 9-technique, which is what defensive ends are playing when they line up on the outside shoulder of the tight end. When the tight end is not there, the defensive end is wide enough that there is a sizable gap between he and the offensive tackle. 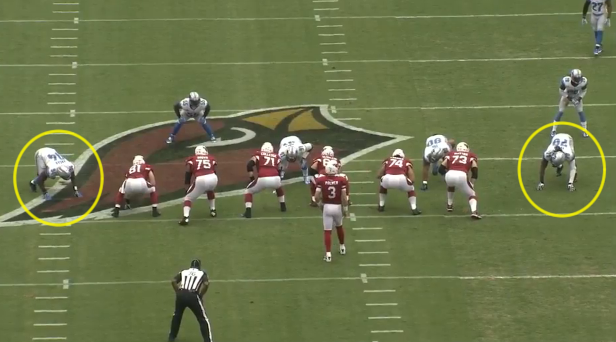 For the Lions, the wide-9 is beneficial to their personnel because it creates more favorable matchups inside for their talented defensive tackle tandem of Ndamukong Suh and Nick Fairley.

"We're seeing more nine-technique than we have all year, and that puts the guards on an island a little bit more at times because the tackles are going to have to leave them early," Bears head coach Marc Trestman said.

An example of that can be seen here from the Lions' game against the Arizona Cardinals in Week 2: 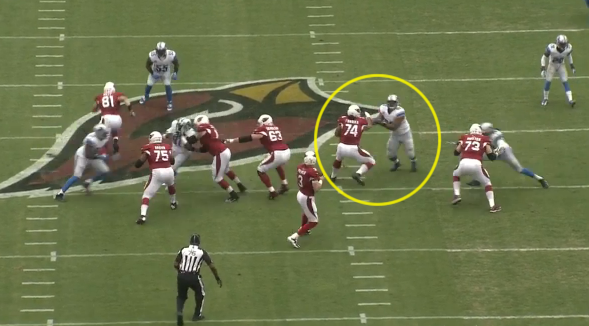 Thus, the Long-Slauson duo of guards will be tested frequently one-on-one against Suh and Fairley.

"Kyle's watched the tape, we've watched it together," Kromer said. "We're working on technique. And that's all you can do going into a game. You can't think about who it is or what you've heard about him. You just gotta watch what you do and how your technique is, and what you think he'll do against you. And try to counteract that."

The "who it is" Kromer was referring to is Suh, who holds arguably the worst reputation in the NFL and will line up against Long for most of the game.

"We'll see how well he is prepared to block me when we play on Sunday," Suh told the Detroit Free Press this week after being informed the Bears drafted Long in part to stop him. "That's their opinion, that's their choice, that's their draft. That's not anything of my concern. I just look forward to and digest whoever I have in front me."

From Bears quarterback Jay Cutler's perspective, he's glad the person in front of Suh is Long.

"You want a guy like that," Cutler said Thursday. "I'm not saying those other four wouldn't come to bat, but they'd have to beat Kyle because he's going to try to be the first one in line."

The good news for the Bears is that Long has improved in each of the first three games and if he can continue that trend Sunday, the Bears may be able to find success with their running game, which ranks just 17th in the league through three games.

"They're a team that's going to try to keep everything inside," Trestman said. "When you see them line up a lot of times there's four down and there are three linebackers but there's also a fit with a safety in the hole. So they're sitting there in a single safety defense or a strong safety ready to fit. So when you're playing wide-9s, you're slanting to be able to have the right fits with your three backers or you're not and you're fitting with a safety. So it does affect the running game in terms of some of the things you have to do in their pursuit."

With the defensive ends lined up so far outside, the Lions force most of the running game to the inside, but it also leaves sizable gaps the linebackers have to fill. If Matt Slauson and Kyle Long can handle the tackles without help from the center, Roberto Garza can get to the second level to spring running back Matt Forte for big gains. The Bears could also pull Slauson or Long -- which they have done frequently this season -- and leave Garza on the tackle. Either way, there are opportunities to be had on the ground against the Lions (Detroit's defense ranks 15th against the run, allowing 104 rushing yards per game) and if the Bears can establish the run early, it could relieve a lot of the pressure on the pass protection.

Outside of Suh and Fairley inside, rookie defensive end Ezekiel Ansah is off to a hot start with 2.5 sacks already and Willie Young can be effective too. Former Bear Israel Idonije is also in the rotation.

So while there will be pressure on the guards left on an island, it will still take a full team effort to stop the Lions' front, just like it did in Pittsburgh last week. The tackles need to be stout, the tight ends have to help, the center needs to chip on the tackles and see the blitzes coming, and running back Matt Forte needs to continue to block at a high-level as he has so far this season.

"We spoke here last week about going to Pittsburgh and it would be loud, and we would handle the noise. And we did," Kromer said. "So now we have to do it again in Detroit."

Another week, another different front, same level of execution needed.