CHICAGO (CBS) -- On the heels of the largest one-day death toll from COVID-19 in Illinois so far, Gov. JB Pritzker on Tuesday announced a five-phase regional approach to gradually reopening the state's economy.

Calling the novel coronavirus "a very real and terrible enemy," Pritzker said the state would not be able to fully reopen until there is a vaccine, a widely available and effective medical treatment, or enough widespread immunity that there are not any new cases of the disease.

"That means we have to figure out how to live with COVID-19 until it can be vanquished," Pritzker said. 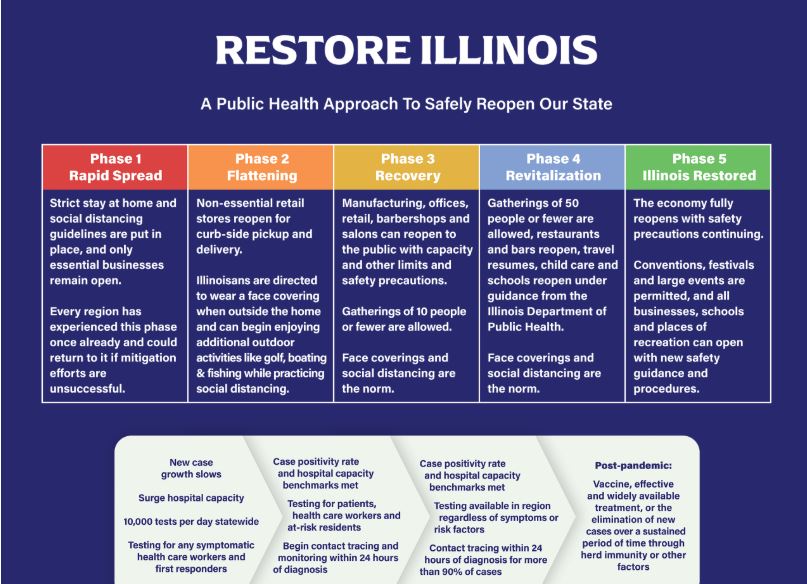 However, he said some parts of the state might be able to begin reopening before others.

"We are one Illinois, but we are also one Illinois made up of 60,000 square miles, and reality on the ground looks different in different areas of our state," he said.

Under the plan dubbed "Restore Illinois," the state already has moved into the second of five phases of reopening, with the start of the governor's extended stay-at-home order on May 1, which allowed for some retail businesses to reopen for pickup and delivery of phone and online sales, and for other changes to the original shelter-in-place mandate.

To move on to Phase 3 of the reopening plan, a region must maintain a COVID-19 positive test rate of 20% or lower, and no more than a 10 percentage-point overall increase in cases for more than 14 days; have no overall increase, and maintain overall stability in virus hospitalizations for at least 28 days; and maintain a surge threshold of 14% availability of ICU beds, medical-surgical beds, and ventilators.

"It's just a matter of making sure that people who live in certain regions have access to health care and that those hospitals are not overwhelmed," Pritzker said. 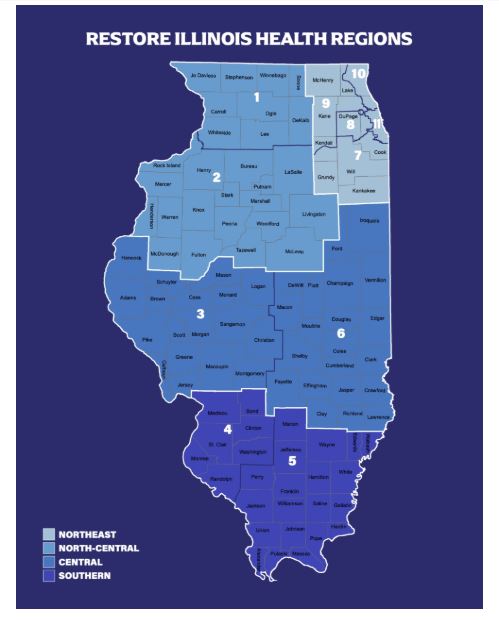 Pritzker said that means no region can move on to Phase 3 until May 29 at the earliest.

"I won't open the door to overwhelming our hospital system, and possibly tens of thousands of additional deaths, by exposing everyone to the virus today, just because a loud but tiny minority would like to indulge in that fantasy," he said.

Under Phase 3 of Restore Illinois, non-essential manufacturing, offices, and retail essential businesses would be allowed to reopen under approved safety guidance from the Illinois Department of Public Health. Remote work, whenever possible, would still be encouraged.

"Even as businesses reopen, employers should do everything in their power to provide remote accommodation for older and COVID-vulnerable emplyoees," Pritzker said.

Pritzker declined to predict which region might be the first to move on to the third phase of reopening.

To move on to Phase 4, a region would have to show continued declines in positive COVID-19 test rates and hospitalizations, and maintain hospital surge capacity.

Under Phase 4, restaurants, bars, cinemas, theaters, and gyms would be allowed to reopen with new capacity limits, under IDPH-approved safety guidelines. Schools, summer and fall programs, childcare, and higher education institutions also would be able to reopen with IDPH guidance. Outdoor recreation programs and public gatherings of up to 50 people would be allowed.

Phase 5 would be a full reopening, including the return of large conventions, festivals, and other large-scale events; and will only be possible with a vaccine, a widely available and effective treatment, or an elimination of new cases over a sustained period of time.

The governor said the guidelines of the reopening plan are subject to change, depending on how the outbreak evolves, and the recommendations of experts.

"We are quite literally writing the playbook as we go," he said. "I'm not afraid to redesign the playbook if the rules change."

Pritzker said enforcement of each of the phases will not only require people to use their best judgment and encourage their friends and neighbors to follow the guidelines, but will depend on local law enforcement officials to monitor for violations, and take action if necessary.