CHICAGO (CBS) -- The funeral for Chicago Police Commander Paul Bauer was held in Bridgeport on Saturday.

The procession is now moving along the route to the cemetery for a private burial service.

Several officers are speaking about Paul Bauer now. The common theme: his friendship was unparalled, his commitment to the police department was absolute. He loved his family and his city.

About 400 agencies outside the city are represented at Paul Bauer's funeral, says Supt. Johnson. "It has shaken us a bit," he said. "Paul would want us to move forward."

Johnson says Bauer's wife, Erin, and daughter, Grace, showed the city and the nation what is means to "be Chicago strong."

"I don't know where they get the strength, but they made me a better person."

Members of the 18th District--about 300 officers--march in front of Paul Bauer's hearse. Hundreds of officers were inside and at least another 1,000 outside the church, Lauren Victory reports.

Attendees have been told to exit. The hearse will be leaving for the cemetery shortly.

Cmdr. Bauer's casket is taken from the church. "Amazing Grace" is played on the bagpipes. Then "Taps" as Supt. Johnson and Mayor Emanuel stand at attention. 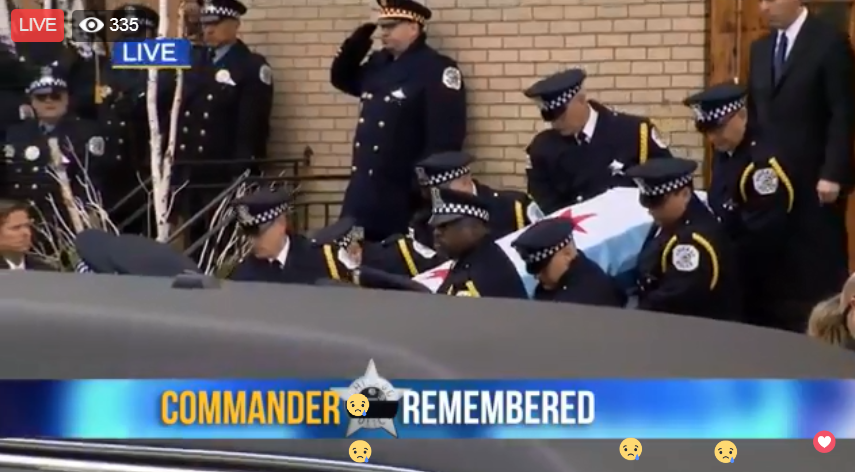 Here is a map of the funeral procession to the cemetery. 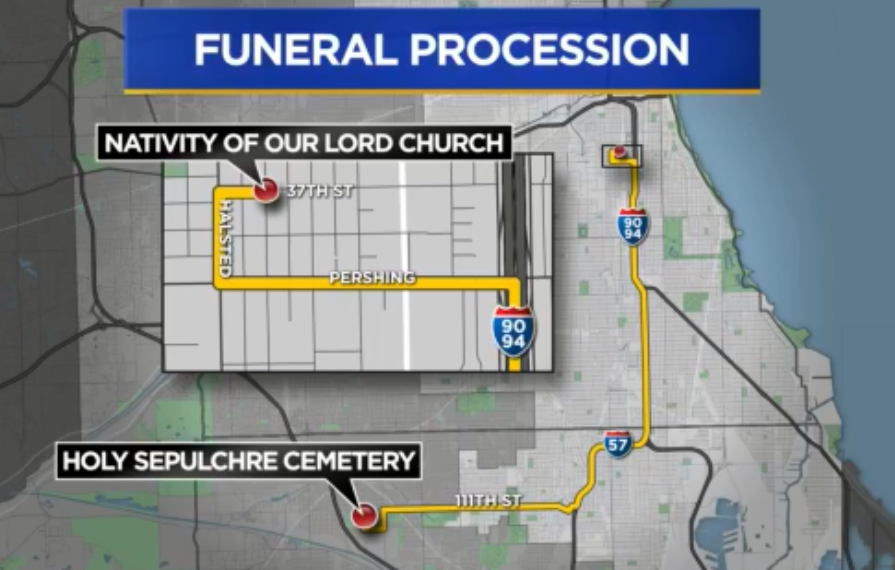 Police officers are now gathering outside the church, preparing to send Cmdr. Bauer's casket to Holy Sepulchre Cemetery in Alsip.

Police officers are now departing the church to gather in formation for the procession to the cemetery.

Cardinal Cupich could not attend the funeral today due to illness. The pastor of Nativity of Our Lord reads a letter addressed to Erin and Grace Bauer.

Paul is "in God's arms now. He is looking down on us and he is smiling."

Mayor Emanuel is now speaking. "Our hearts are broken and our faith is tested .. because Commander Paul Bauer was the best of Chicago."

"Though our grief, let us all remember the things Paul did, big and small."

"We say farewell to this beloved son of Chicago."

Johnson said Bauer, the highest ranking member of the 18th District, would take time to help a custodian in the building to learn English.

He boasted "on and on and on" about the great things happening in the district. "I couldn't be more proud of him and his team," Johnson said, joking that he knew all was well in Bauer's district because the aldermen rarely called.

Johnson speaks to Bauer's daughter, Grace: "We can't comprehend the pain and loss you are going through," he said. Johnson promises that CPD will always be there for her. "You have shown amazing Grace. .. You have made me a better man."

Applause for Erin Bauer ... "You have propped up this police department and we thank you," Johnson said.

Johnson gets emotional: "Paul, I am going to miss you. "There are no words to describe the depth of gratitude. .... May you rest in peace."

Retired Chief John Escalante is speaking next. He was Bauer's childhood friend in the Gage Park neighborhood and has known him for 45 years.

"There was a part of Paul who would be annoyed by this," he said. "He didn't like being the center of attention."

They ate lunch every Thursday at the Bridgeport Restaurant, at 35th and Halsted. In the same booth, every time. They mostly talked about family and their kids.

"Erin and Grace were everything," Escalante said. Bauer was concerned about demands of work as he was promoted to captain would hurt his family time.

"We are still those same kids we were in Gage Park," said Escalante. It helped me deal with 30 years in the Chicago Police Department.

"I could talk about him forever."

The eulogies are starting. First is Capt. Mel Roman of the 18th District.

Every crime in Bauer's district, he took personally, said Capt. Roman. The "pit bull" in Bauer would come out when he learned of business that were not following the law.

Roman thanks the members of the 18th District for their professionalism after Bauer's death. "We stumbled ... but we didn't break," he said.

Roman closes with a poem, which read in part: "Die like a hero going home."

Bauer 'the problem solver.' (This was the time Bauer deftly escorted Trump protesters out of his district, across the river, into another district.

The 'leprosy of society'

How Bauer should be remembered.

Members of Bauer's 18th district, all of them in attendance to pay their respects to their leader.

Father Brandt: Cmdr. Bauer "fought the good fight ... it was fight that cost him his life. His life was stolen from us by a four-time convicted felon.

"It was a race well, well run. Along the way he kept the faith."

"Do not let your hearts be troubled."

Father Brandt says Bauer's accused killer had been in trouble with the law many times, a troubled man with a violent past and was "one who should have never been out in society, but he was due to a broken system." Brandt said Bauer spoke about that broken system many times.

Father Dan Brandt begins his Homily: "We gather here today with troubled hearts." Father Brandt reminds the congregation that yesterday was the Bauers 16th wedding anniversary. Grace has the apple of Paul's eye He says that there were so many people at the visitation, that he "had to park in Tinley Park."

Nativity of Our Lord is filled to capacity. Here is a photo from CPD spokesman Anthony Gugleimi.

Chicagoans are encouraged to line the funeral procession route after the Mass. Here is a map:

The funeral Mass will be starting shortly. The last time an officer was killed in the line of duty in Chicago was 2011.

Former Mayor Richard Daley is in attendance. Nativity of Our Lord is his family's old church. Funerals for his father and mother were held here.

Hundreds of officers from the 18th District, which Bauer led at the time of his murder, march into Nativity of Our Lord. Bauer was trying to subdue an armed suspect who had fled from police. Shomari Legghette is charged with murder.

The funeral is expected to begin at 10 a.m. Cmdr. Bauer's daughter, Grace, will be giving the first reading during the Mass. Mayor Emanuel and Supt. Eddie Johnson will be among those eulogizing the 18th District Commander.

Because of the size of Nativity Of Our Lord Church in Bridgeport and the large crowds, the funeral was limited to police and invited guests. The church began filling up early.

This was the scene outside Nativity Of Our Lord Church in Bridgeport for Bauer's visitation on Friday. Thousands of mourners paid their respects.