(CBS) A stated goal of the Bears' offseason plan were to add young playmakers on defense who would allow them to be multiple with their looks. Signing free agent defensive end Lamarr Houston – reportedly to a five-year, $35-million contract with $14.9-million guaranteed - helps the Bears get closer to achieving that initiative.

At 6-foot-3 and believed to have been playing around 280 pounds after previously being around 300 pounds, Houston moves like a much smaller man, putting him in the category of a hybrid defender. He's nimble enough to drop into coverage when asked, quick enough to bend the edge from a two-point stance as a pass rusher and strong enough to set the edge against the run. Houston will be 27 when the season starts, so this is a calculated move by the Bears, who hope they've invested in an ascending prospect.

Let's step inside the film room to see what prompted the Bears to strike quickly – and richly – to secure Houston's services.

The first aspect of Houston's game that jumps off the tape is his versatility.

The Raiders primarily used him as a weak-side outside linebacker in their 30-fronts, but they also deployed him on the strong side, as well as a three-, five- and six-technique down lineman in their 40-front packages. 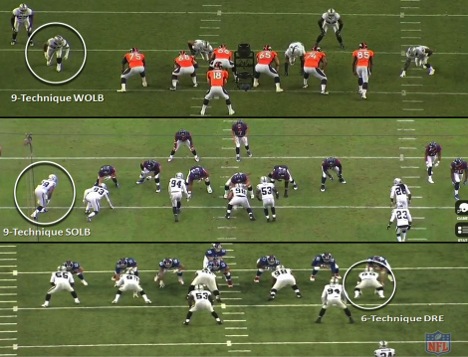 Houston affords defensive coordinators alignment and assignment flexibility. While he's primarily asked to rush the passer or play contain or force against the run, Houston has also been given zone-coverage responsibilities.

Here's an example of Houston initially lining up as the weak-side backer in a 2-3-6 alignment, only to drop to his landmark to cover the short curl/flat passing zone. 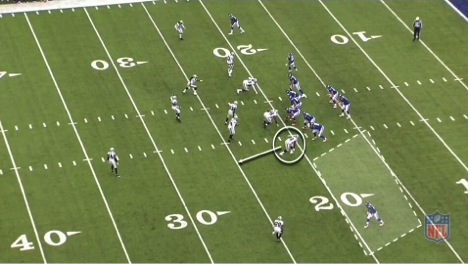 Houston properly diagnoses the play, beats the blockers to the edge and forces a fumble in the process. 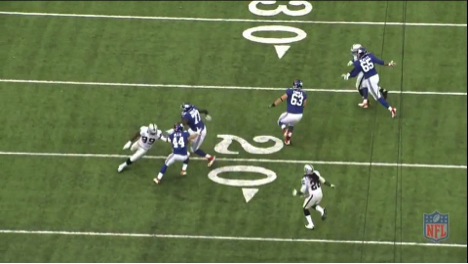 Throughout his career, Houston has shown an exceptional ability to set the edge as a run defender. Certainly, this trait weighed heavily in the Bears' evaluation of Houston, considering how anemic they were against the run in 2013, a season in which they surrendered a league-high 2,583 yards.

Here's an example of Houston playing a strong two-gap technique against the Steelers. Houston is lined up as the weak-side outside linebacker in a 3-3-5 alignment. 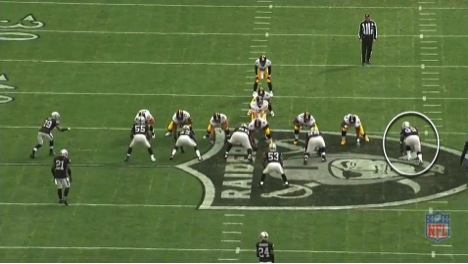 There's a lane for the Steelers running back through the play-side B-gap. However, Houston keeps his head in the hole just enough to force the play to bounce outside. 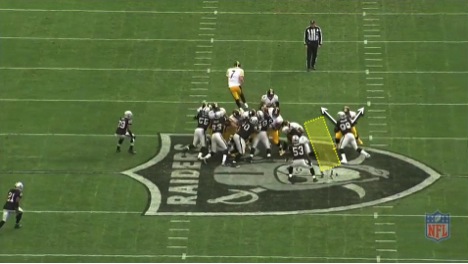 Houston keeps his hands inside to disengage from Beachum, chases down the ball carrier and drops him behind the line of scrimmage for a tackle for loss. 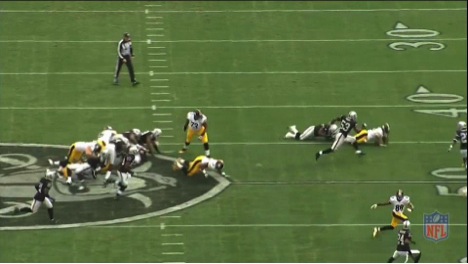 Houston deployed a combination of technique, vision, strength and speed to make this play.

Playing defensive end requires strength to hold up at the point of attack, but it also requires the ability to read the setup of blockers. This entails properly diagnosing your keys off the snap of the ball. Perhaps a "high hat" (standing upright in a stance) key from a blocker to indicate it's a pass play or a lower pad level to indicate a run or, in this instance, reading a slip block to sniff out a screen.

Against the Chargers, Houston is left unblocked by left tackle Michael Harris (No. 79). 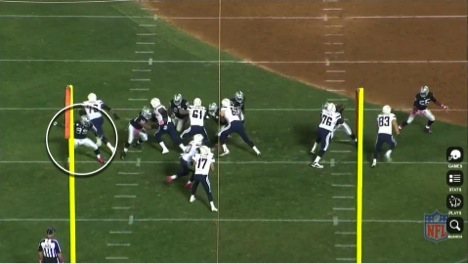 But instead of continuing his pursuit of quarterback Philip Rivers, Houston plants, pivots and locates a receiver in the flats. 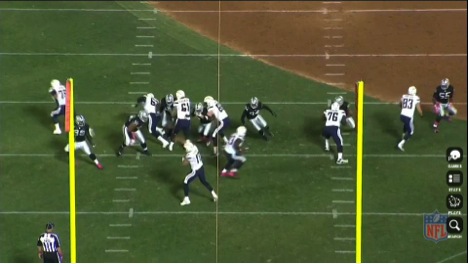 Houston shows excellent quickness to chase in space and brings down running back Danny Woodhead behind the line of scrimmage for a tackle for loss. 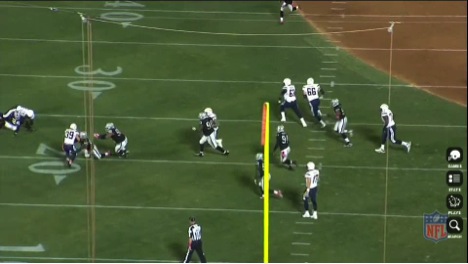 This is an illustration of maturity as a pass rusher, to feel a blocker and react accordingly. Additionally, it's a demonstration of Houston's speed, as he's able to cover nearly 15 yards before Woodhead can make any progress up the field.

Houston will likely never be a league leader in sacks. But he will provide the Bears with flexibility along their defensive front and should grow as a pass rusher as more pieces are added around him.

Part of Houston's development as a pass rusher will also involve developing a greater repertoire of pass rush moves.

Currently, Houston primarily relies on a dip and rip -- where he gets his shoulders and pad level below his blocker's, then uses a swim move to disengage. As he develops more confidence as a hand-fighter, he will start to cross blockers across their face to take a shorter path to the passer, instead of taking the longer route around the edge.

The Bears still have a ways to go in improving their defense, but it's safe to say that after day one of free agency, their defense has improved.