(CBS) Every first-round draft pick comes with an assumed level of scrutiny. For some, it's more than others. Shea McClellin certainly falls into this category.

Just three months prior to being selected with the 19th overall selection in the 2012 draft, Phil Emery was introduced to Chicago as the fifth general manager in franchise history. Emery laid out a plan centered on building a talent base through the draft. By extension of these expectations, McClellin became the embodiment of the new era.

McClellin was a late riser in the draft process, earning millions from his performance at the NFL Combine. Many viewed him as an ideal fit at outside linebacker in a 3-4 defense. However, at the time he was drafted, Lovie Smith was the coach of the Bears, and McClellin fit the profile of a defensive end in his Tampa-2 scheme. Smith valued speed over size and sought out edge rushers who could quickly bend the edge and press the pocket from the outside.

Year one of the McClellin experiment didn't go as planned. His lack of functional strength at the point of attack rendered him a liability against the run, and he managed only 2 1/2 sacks.

Prior to year two, McClellin bulked up in hopes of becoming more stout at the point of attack. Yet his deficiencies against the run remained, and his sack output improved only incrementally to four.

It's now the third year of the McClellin experiment, and he's going through a position change, moving to outside linebacker. The attributes that were previously thought to make him unique in the trenches are now marginalized at the second level.

Whether you're talking about the front seven or the back seven of a defense, linebackers are always accounted for. Linebacker is one of the most physically demanding and mentally challenging positions to play on defense. A linebacker is expected to be involved in both defending the pass on the back end and stuffing the run on the front end.

This past Friday marked McClellin's first NFL action as a linebacker. He logged 29 snaps, and his performance wasn't impressive. The fact that teams don't game plan until the third preseason game is moot, as McClellin showed poor fundamentals in run support, was unable to disengage from blockers and looked uneasy in coverage drops.

Let's go to the film room to take a closer look at the tape.

In the first example, the Eagles run a read-option play from the shotgun with 11 personnel in a 3-by-1 alignment. The Bears respond with nickel personnel, with McClellin (circled in orange) lined up over the strong-side B-gap in a 30-technique.

McClellin spies the quarterback and reads his keys: the helmet of the uncovered lineman (center on this play) and the running back's footwork. These keys will lead him to the play, and it's then up to him to scrape over the top of the trash and set a hard edge. 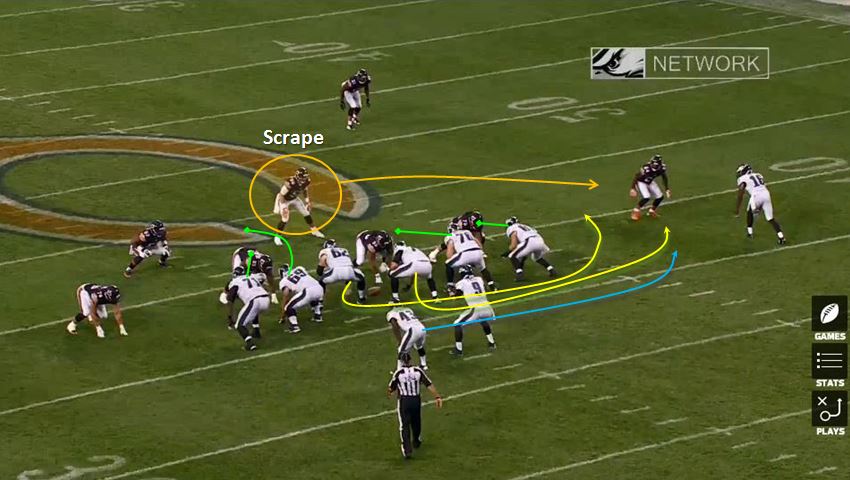 McClellin arrives at the proper spot on the field but uses improper body position and technique at the collision point, attacking the blocker with his head inside. In doing so, he's unable to keep his outside shoulder free, setting a soft edge, which allows Darren Sproles to bounce the play outside. 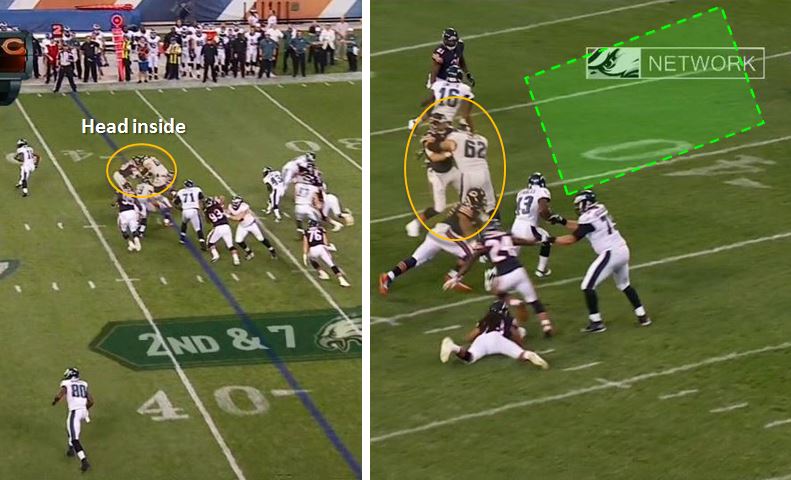 When McClellin's finally able to disengage and make a tackle attempt, he's unable to get anything more than a hand on Sproles' shoulder pad, which is easily avoided, adding another seven yards to the run. 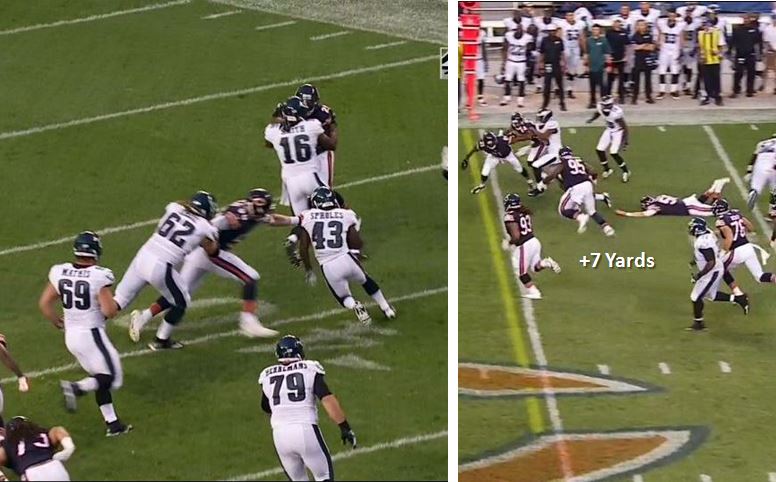 In the next example, the Eagles again run a read-option play from the shotgun with 11 personnel in a 3-by-1 alignment, but they just flip the formation. The Bears are again in nickel personnel, with McClellin (circled in orange) shading the center in a 10-technique. 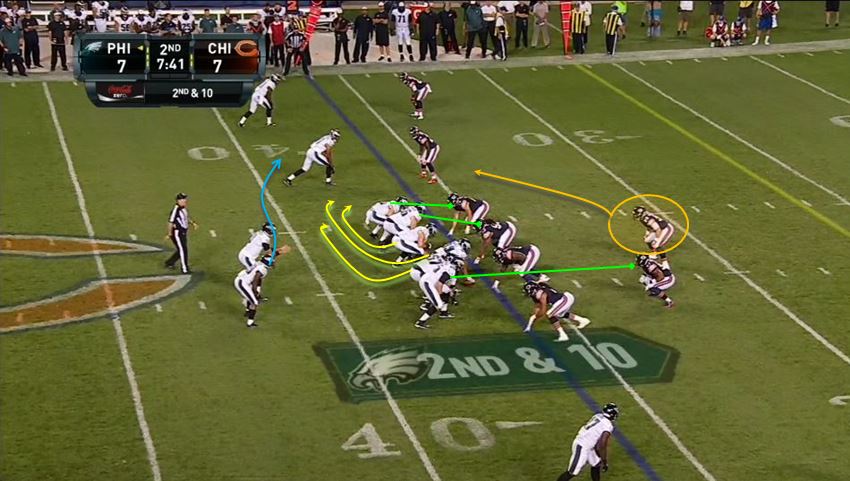 This play is a near mirror image of the previous play we looked at. McClellin reads the pulling lineman and begins to attack downhill. On this play, the offensive lineman falls down, yet McClellin doesn't alter his path laterally and essentially takes himself out of the play. 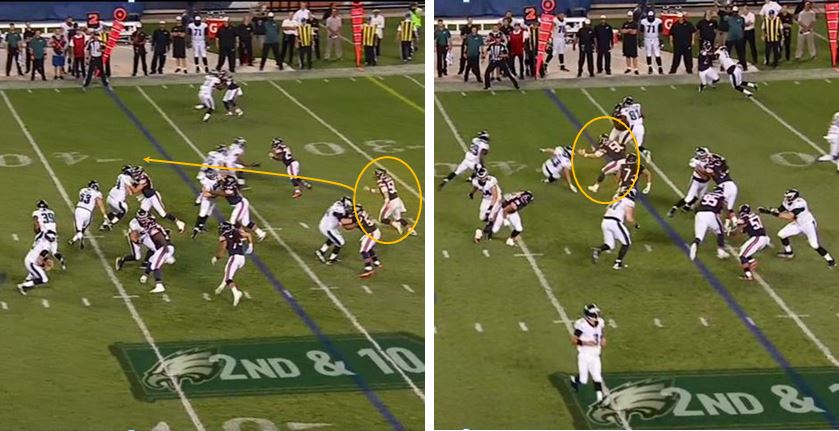 McClellin is again unable to get outside of the blocker, leaving him in a position to only make an arm tackle attempt, which the running back avoids. This missed tackle attempt adds another 25 yards to the run. 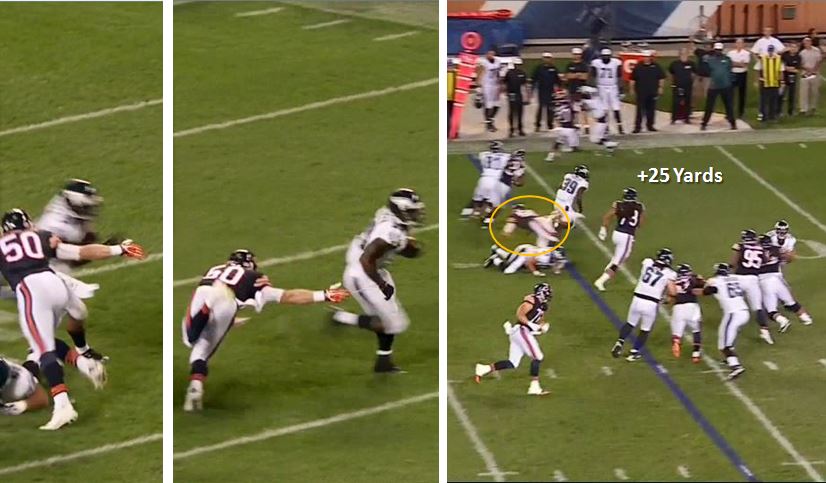 There are several other examples of McClellin being in position to make open-field tackles and tackles for a loss yet failing. Against Philadelphia, McClellin spent too much time on the ground without bringing opponents down with him. 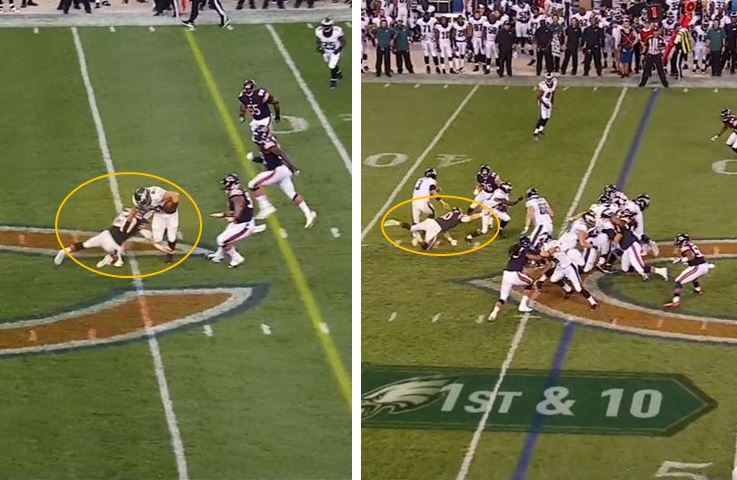 When things go wrong on the football field, blame is typically directed at coaches and scheme, which may be merited, but explosive plays typically stem from missed assignments and sloppy technique. Nothing will frustrate a coach more than seeing a linebacker make a read on a play only to miss a tackle due to lapses in fundamentals.

Given his draft status, McClellin is assured of a roster spot; linebackers coach Reggie Herring hinted at that earlier this week when he said, "Y'all be patient. We'll know after the first game, second game, where we're at with him."

Asking fans for patience entering year three of the McClellin experiment is an interesting request.

A better question is: When will patience with McClellin run out within the organization?