(CBS) By any measure, NFL preseason games are meaningless. They're a necessary evil that helps shape the bottom-third of a roster and leave coaching staffs and personnel departments holding their breath every time a starter is slow to get up from the turf.

Even the all-important third preseason game, for which teams will semi-game plan and give their starters extended reps, isn't an indicator of regular-season performance. It's yet another glorified practice in which score is kept.

In that sense, the Bears couldn't find a better opponent to practice against than the defending Super Bowl champion Seahawks, whom they face this Friday night in Seattle at 9 p.m. CT.

The Bears are playoff hopefuls, while the Seahawks hope to become the first back-to-back champion since the Patriots repeated in February 2005. For the second straight year, the Bears will lean on their offense to win games, while the Seahawks will once again rely on their suffocating defense to lead the way. This contrast in style will make for the most compelling two quarters -- or thereabouts -- of Bears football you'll see until the regular season kicks off in two weeks.

Despite the fact the Super Bowl was decided by the second quarter, it was refreshing to see the Seahawks utterly dismantle the Broncos and give more credence to the adage that defense wins championships. The Seattle defense is a culmination of astute talent procurement and a sophisticated-yet-simple scheme.

Seahawks coach Pete Carroll has built a defense that excels at both stopping the run and eliminating big pass plays by protecting the middle of the field with a deep safety. In fact, the 2013 Seahawks rank among the best pass defenses in the history of the NFL.

When you get under the hood, you'll notice the subtleties and nuances that make the Seahawks special. Along the defensive front, they deploy hybrid defensive lines that mix one- and two-gap responsibilities. This gives second-level defenders -- linebackers and box safeties -- more freedom to read and react to their keys. But the key to the Seahawks' dominant defense lies in their secondary.

Having the league's premier free safety (Earl Thomas) and cover cornerback (Richard Sherman) allows Seattle to safely defend deep passing zones with three players. In doing so, they can play eight-man fronts, giving them both a one-for-one match of the eight run gaps and four underneath pass defenders to patrol the intermediate passing zones.

Let's go to the film room to take a closer look at Seattle's secondary.

At its core, the Seahawks run Cover-1 (man free) and Cover-3 (three deep zone defenders) defenses. The Seahawks will mix up their coverages by showing two-high safety looks at the snap, but then dropping one, or playing a "robber" technique. They will also bring five-man pressure packages, but they are primarily a Cover-3 team.

The Seahawks' spin on Cover-3 is they play it with man principles on the perimeter, meaning they typically align their cornerbacks in press coverage. 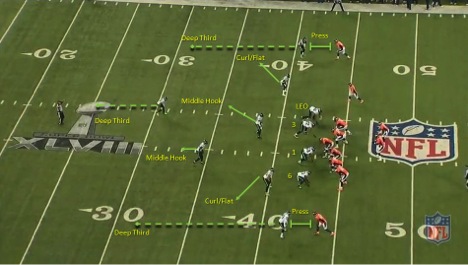 The cornerbacks play with outside leverage and "pattern match" the No. 1 receivers, meaning they will match any vertical route. By playing with outside leverage, they can funnel the receivers back to where they have help, the deep safety patrolling the deep middle of the field. The free safety must get enough depth to stay on top of any vertical route and be able to quickly drive downhill on any inside-breaking routes. 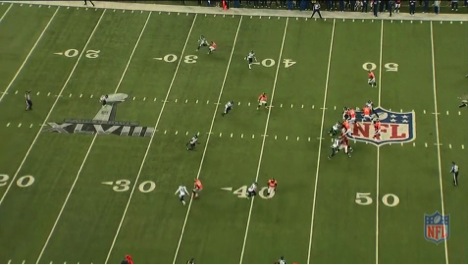 Like any coverage, Cover-3 has its weaknesses. After reviewing the Seahawks' 2013 game tape, of all their opponents, the Indianapolis Colts devised the smartest game plan. Some of the concepts and formations the Colts deployed coincide with elements from the Bears' playbook, so let's take a look at how Indianapolis had success against Seattle.

The Colts come out in 21 personnel in a 3-by-1 alignment and run a three-level stretch route, also known as a "flood" route. The Seahawks respond with regular personnel in a 4-3 over front.

Take notice of the reduced split (called "nasty") from Colts wide receiver T.Y. Hilton. With the reduced split, Hilton now has the ability to run any route in the route tree. As such, Sherman can't jam him at the line. Instead, Sherman plays off coverage with outside leverage and reads the patterns of both Hilton and tight end Coby Fleener to determine which is a threat to his zone. In doing so, Hilton has a free release off the line.

The Seahawks send linebacker K.J. Wright (circled in green) on a delayed blitz, leaving the Seahawks in a three-deep, three-under zone. 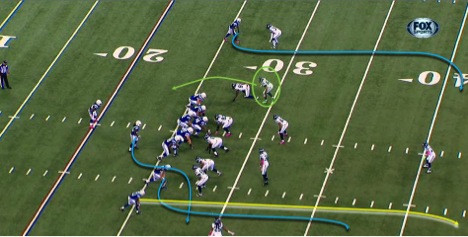 Sherman – who can be seen signaling to Thomas – assumes Hilton will be going on a vertical route and will be picked up by Thomas over the top. Sherman doesn't get enough depth on his drop and splits the difference between Hilton and Fleener.

Sherman's eyes are focused on Fleener and Luck, and he loses Hilton in the process. With the middle of the field closed, Hilton stems his route to the corner and has a lot of room to work with. 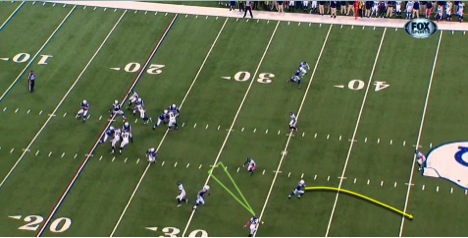 Luck drops in a perfect pass, and it's off to the races for a 73-yard touchdown. 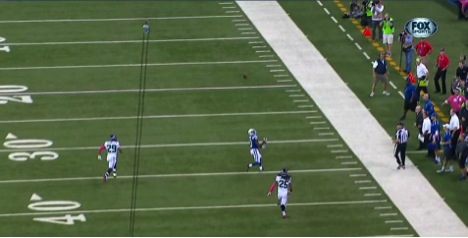 The reduced splits got Hilton into his route unimpeded and by the time he made his break to the corner, he was at full speed and had an angle on Thomas. The Colts flooded the Cover-3 at three levels with outside breaking routes and were able to hit a big play over the top.

in the next example, the Colts come out in 11 personnel in a 3-by-1 alignment. The Seahawks respond with their nickel personnel in a 4-3 over front. The Colts run a "999" route, which is all verticals. 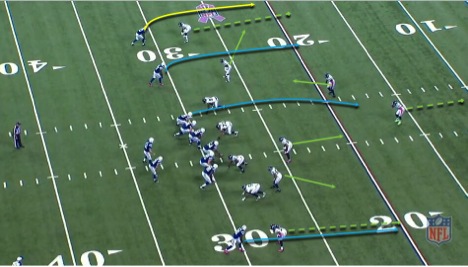 The depth and stem of Fleener's route over the middle occupies Thomas. At the top of the formation, cornerback Brandon Browner is left to defend both Reggie Wayne and Hilton. Browner should play this route more to the outside receiver (Hilton), but he gets caught in the middle, allowing Hilton to get over the top. 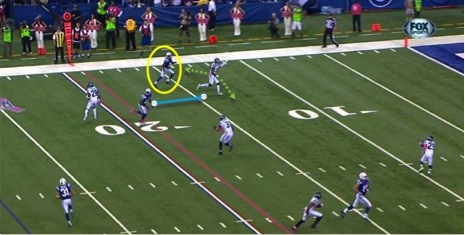 Luck again threads a perfect pass for Hilton's second touchdown of the game. 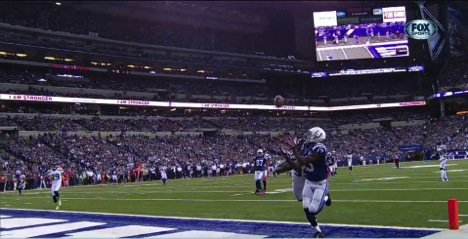 When teams like to play receivers physically at the line of scrimmage, an offense must be willing to challenge them deep. Every player has lapses in technique and alignment, so by putting the secondary in pre-snap conflict from a formation or an alignment, an opportunity for a big play exists.

Speed is the element that gives the Seahawks secondary the most trouble, but in Brandon Marshall and Alshon Jeffery, the Bears have receivers who can physically match up and win hand fights on their release to get over the top. Chicago coach Marc Trestman is adept at stretching a team horizontally while making vertical gashes.

Look for the Bears to run a lot of vertical routes out of bunched formations to test the Seahawks secondary on Friday night.