(CBS) There wasn't a Loch Ness Monster sighting in Green Bay last Thursday night. Or a unicorn, or a sasquatch. However, there may have been a modern caveman on display in Clay Matthews.

So much has been made of the Cover-2 Man defense the Packers deployed that you'd think it was a mystical scheme devised by Dom Capers in a caffeine-fueled late night white-board session, but it wasn't. Cover-2 Man, sometimes called "Man Under" or "Cover-5" has been a popular coverage for decades.

At its foundation, it is just a variant of the infamous Cover-2 the Bears run, but instead of zone coverage underneath, it is man-to-man. The Cover-2 Man suits the Packers' defensive style well, as it allows their corners to be physical off the line of scrimmage, knowing they have help over the top with two deep safeties.

Let's take a closer look at Jay Cutler's four interceptions to determine if the Packers were even in Cover-2 Man, but more importantly, to get to the bottom of where the finger(s) should be pointed.

The situation: With 1:13 left in the first half, the Bears have the ball, 2nd-and-10 at their own 37-yard line trailing 10-0. The Bears line up with 3WR-1TE-1RB, and the Packers counter with Cover-2 Man coverage in dime personnel (six defensive backs), in a 2-3-6 alignment. Eric Walden rushes the passer, Dezman Moses lines head up on Kellen Davis, Charles Woodson is manned up on Matt Forte, and DJ Smith is spying Jay Cutler. 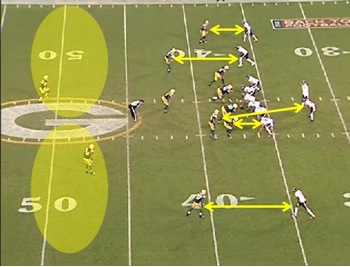 The Bears run a route combination with Earl Bennett on a short dig (in) route and Marshall – operating out of the slot – on a deep out-route. The Bears choose to max protect on this play, keeping both Forte and Davis in, which allows the Packers to cover three Bears receivers with five defenders.

The Bears protection is there, but with nobody to throw to, Cutler makes a late decision to try and hit Bennett on the dig. Cutler doesn't plant his feet and throws the ball off of one foot, leaving the pass short, allowing Tramon Williams to undercut the route for an interception: 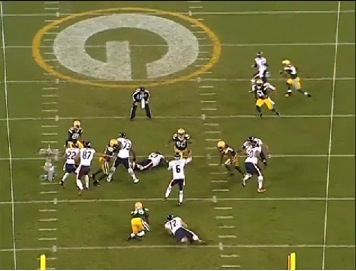 A better throw from Cutler on this play could've resulted in a huge completion as the sideline routes run by Marshall and Jeffery drew the safeties' attention, leaving a huge hole in the middle of the defense. This interception is on Cutler's bad mechanics.

The situation: With 3:18 left in the third quarter, the Bears have the ball, 3rd-and-6 at their own 36-yard line trailing 13-3. They come out in a 3WR-1TE-1RB personnel grouping, and the Packers counter with Cover-3 zone coverage in dime personnel, in an unusual 1-4-6 alignment. 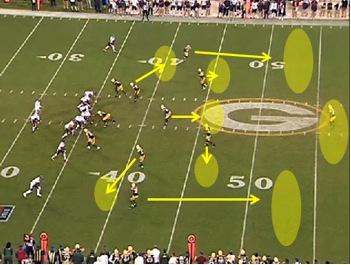 Bennett sits down in a soft spot in the zone, but instead of coming back to the ball, he waits for the ball to get to him, allowing Charles Woodson to undercut the route for the interception. Can't blame this one on 2-Man, as the Packers weren't in it. This interception is on Bennett who didn't help his quarterback out. 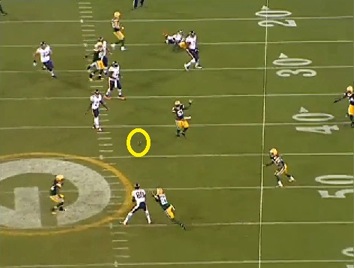 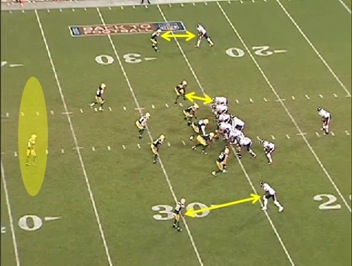 The Bears choose to max protect on a play-action pass. I understand Cutler is trying to make a play here, but considering the situation, the Bears just need to move the ball down the field.

Cutler never even looks at the right side of the field where Jeffery gets wide open in single coverage on a deep comeback (in green). Instead, Cutler tries to force the ball to Marshall who is double-covered on a vertical route. Not only was this a terrible decision by Cutler, it was an even worse throw, underthrown by five yards for an easy interception by Tramon Williams. The Packers threw a "dagger" touchdown on the very next play. Game. Over. 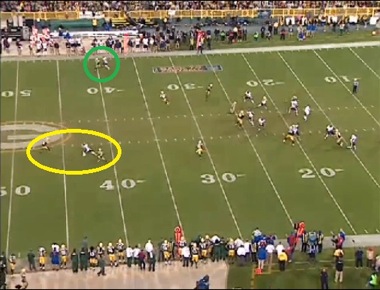 The situation: With 3:07 remaining in the game, the Bears have the ball, 4th-and-5 at their own 23-yard line and are in complete desperation mode. The Bears line up with 3WR-1TE-1RB, and the Packers counter with Cover-2 Man coverage in dime personnel (6 defensive backs), in a 2-3-6 alignment. 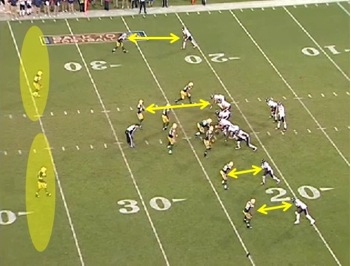 The Bears again run a crossing route combination with Marshall and Bennett, with Bennett running an out and Marshall running a dig. Once again, Cutler stares down one side of the field, allowing safety Jerron McMillan to undercut the route, picking off Cutler for the fourth time.

This was just an ugly offensive performance from the Bears, with a lot of blame to go around. Suggesting it was a magical coverage that did in the Bears, just isn't true. There's no doubt that Dom Capers had a better game plan than Mike Tice, but this was a team loss. Bad mechanics, bad reads, bad throws, shoddy protection, receivers not coming back to the ball, you name it, the Bears were guilty of it.

Let's burn this game film and dissolve the ashes in a vat of acid.