(CBS) Collectively, the Baltimore Ravens offense has struggled to move the ball and score points. However, one bright spot has been wide receiver Torrey Smith.

Smith has averaged 4.5 receptions and 84 yards per game, yet the Packers held him to one reception for 12 yards.

Let's go to the film room to look at what the Packers did to neutralize the Ravens most potent offensive weapon.

The Packers respond with their nickel personnel (5 defensive backs) in a 2-4-5 alignment, in a pre-snap two deep safety look, with cornerback Sam Shields playing off coverage on Smith. 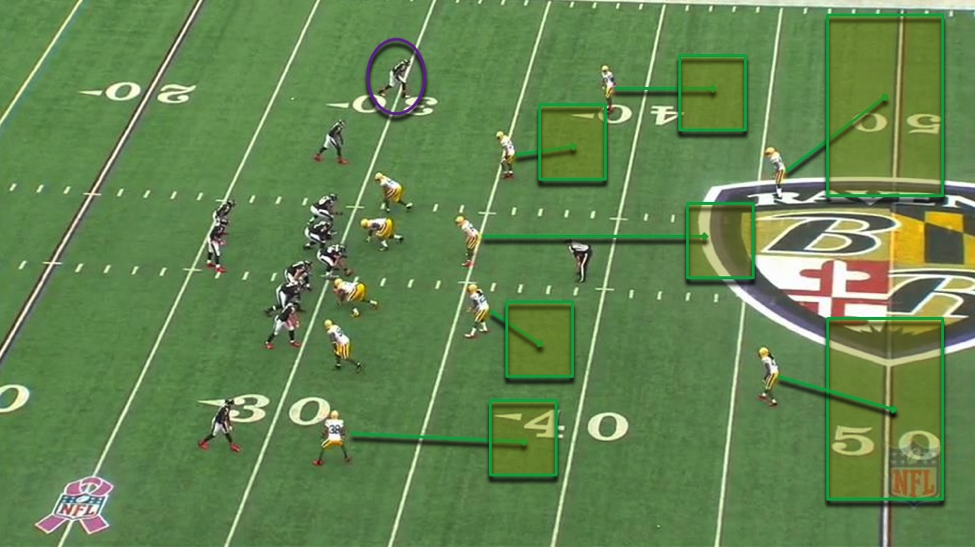 The Packers drop into a Tampa-2 style zone coverage.

Smith is the primary receiver in this progression, so Flacco reads the drop of safety Morgan Burnett. Burnett quickly gets to his landmark (the top of the numbers), but notice the width of his drop. 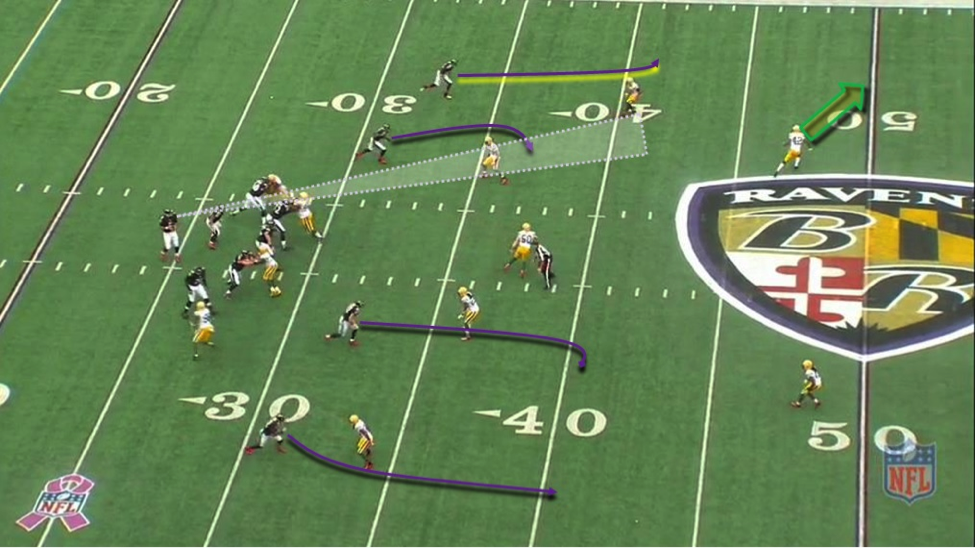 With both Shields and Burnett staying over the top of Smith, he breaks his route off to the sidelines, forcing Flacco to go to his secondary read – slot receiver up the seam - but the pass is both late and off target. 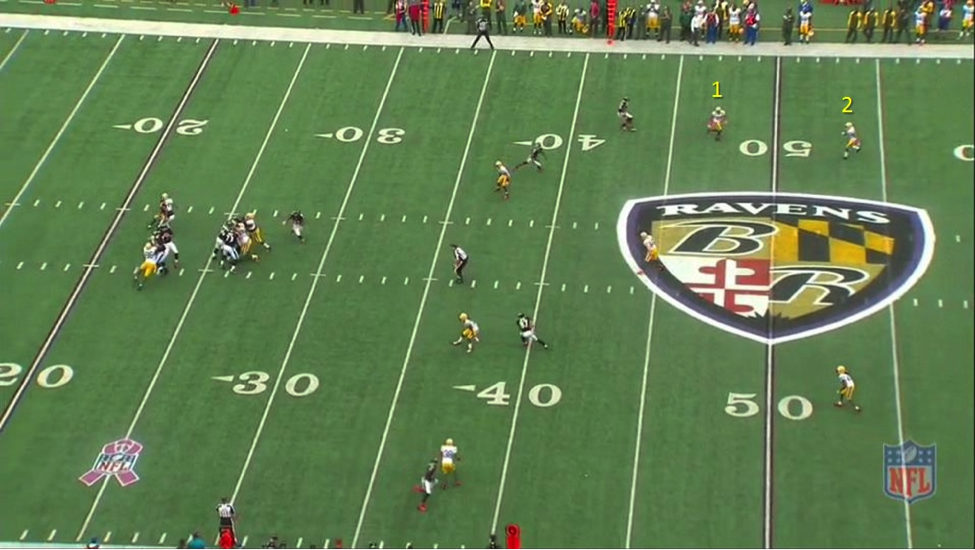 Knowing Smith has elite speed, the Packers widened their safety alignments to both defend the sidelines an assure they won't get beat over the top, "stacking" both the cornerback and safety on top of Smith.

The Packers also used this wide safety alignment when they played 2-man coverage. Clearly, their game plan was to eliminate the vertical routes by keeping a top on the defense.

In the next example, the Ravens have the ball 3rd-and-13 from their own 17-yard line, and come out in "quads" personnel (4 wide receivers, 1 running back) in a 2x2 alignment. 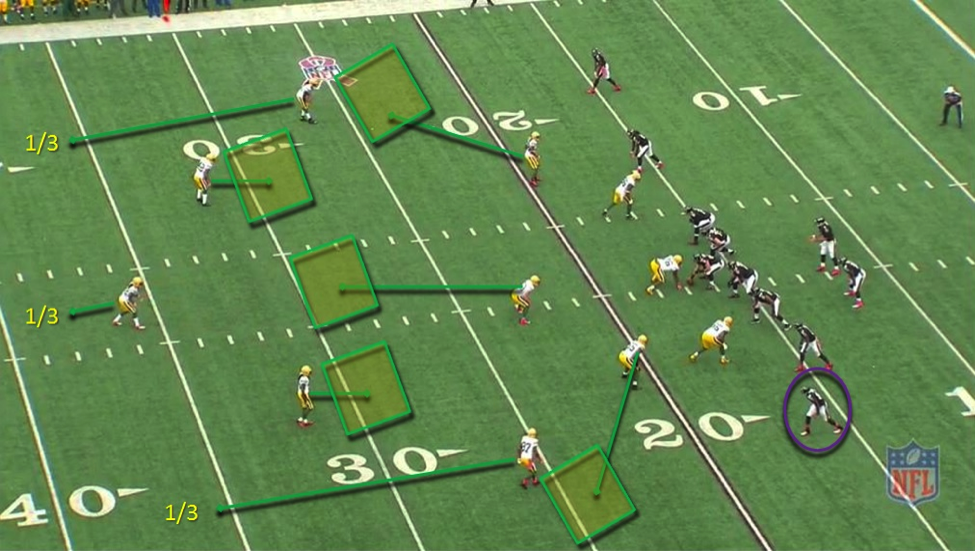 The Packers rush three and drop eight into "3-cloud" coverage, 5 underneath and 3 deep defenders. The Ravens run curls at the sticks, with a shallow crosser underneath, and Ray Rice releases into the flat. 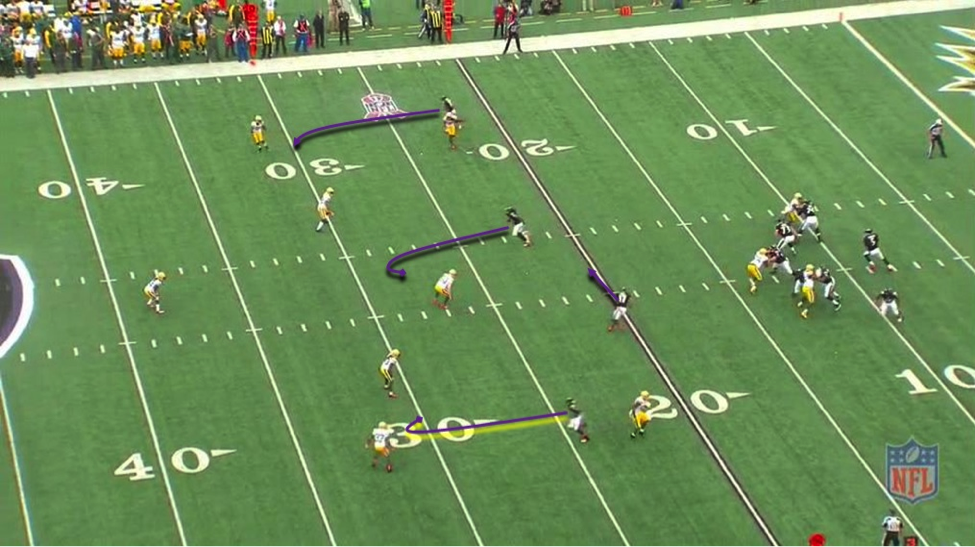 The Packers cornerbacks bail to take a deep third and two of their deep safeties roll up into the underneath zones. This takes away the curl routes and effectively triple teams Smith.

The flat defender (#1) is spying Rice, but along with the safety (#2) can undercut a pass to Smith, while Shields has the deep-third over the top. With the curls covered, Flacco is forced to check it down to the shallow crosser well short of the marker. 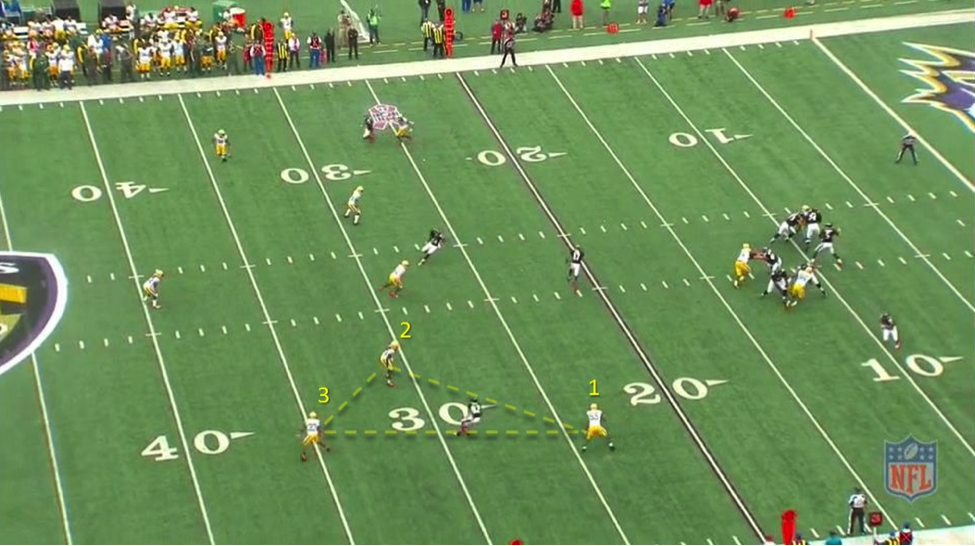 In addition to running various coverages with deep help over the top, the Packers were physical with Smith, pressing him on his releases.

The Bears will be playing without their best cornerback, Charles Tillman. Last week against the Lions, the Bears frequently left Tillman on an island against Calvin Johnson. In hindsight, given his health, this was a questionable coaching decision.

The Ravens struggle to run the football, so there shouldn't be a need to drop a safety into the box in run support. This week against Smith, the Bears should limit their man coverage and play a mixture of 2-man and 2-zone to keep a top on the defense, not get beat deep, and challenge the Ravens to beat them with someone other than Smith.