(CBS) Overall, it's been a dismal year for the Arizona Cardinals. They're a 5-9 team with the worst offense in the NFL, led by a sixth-round rookie quarterback.

In a few weeks, the organization will be faced with difficult questions about the current brain trust to determine if they're the right group to get things turned around. However, there are some building blocks on the defensive side of the football.

The common denominator in the Cardinals' five wins is dominant defensive performances. Defensive coordinator Ray Horton played in the league for 10 seasons, and honed his craft as a defensive assistant on Dick LeBeau's coaching staff in Pittsburgh. Horton loves to create pressure via the blitz, and two key members of the Cardinals defense - cornerback Patrick Peterson, and linebacker Daryl Washington - are the centerpieces of the attack.

In this week's playbook, I break down a staple of the Cardinals pressure package: the "cross dog" blitz.

The Cardinals line up in their base 3-4 personnel. They walk safety Adrian Wilson (circled in blue) into the box, line Kerry Rhodes up as the single-high safety, put Patrick Peterson (boxed in yellow) "on an island" in press-man coverage, and inside linebacker Daryl Washington (green arrow) is lined up five yards off the line of scrimmage. 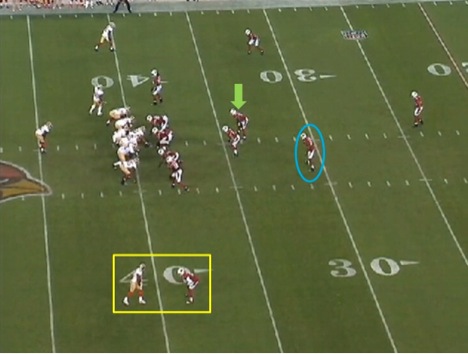 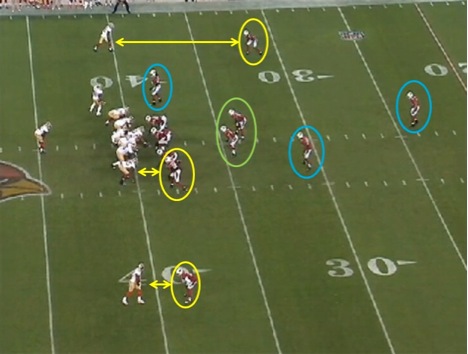 On a "cross dog" blitz, the blitzers overlap – similar to a stunt run by a defensive end and tackle – with one going under the other. On this play, the Cardinals are blitzing the A-gap (the gap in between the center and guard) with both of their inside linebackers, Paris Lenon (circled in red) blitzes first, and Washington (circled in green) trails. 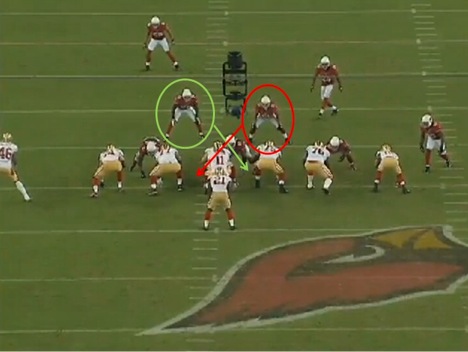 With nose tackle Dan Williams taking an outside release to the strong or "closed" side of the formation, 49ers center Jonathan Goodwin slides protection to the right to help out guard Alex Boone, which leaves only one protector – running back Frank Gore – to take on two blockers.

With a numerical advantage, and Washington as the trailing man in the cross dog – ensuring he will be left unblocked – Alex Smith has nowhere to go as he's brought down for a loss. 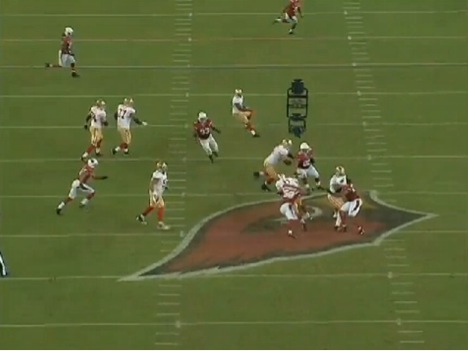 This is great design by Horton, but without a player like Peterson it wouldn't be possible. Peterson doesn't require safety help over the top. Thus, Horton is able to let Peterson cover one half of the field on his own (shown below), giving Horton flexibility in how he uses his safeties.

He can comfortably walk one into the box, blitz them, or as he did on this play, he can use them to fill in the zone vacated by blitzing linebackers. Having a linebacker like Washington, the league's premier blitzing inside linebacker, allows Horton to cave the pocket from the inside. 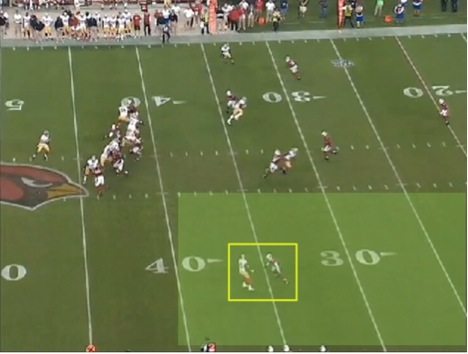 As you can see from the picture above, Peterson is the only Cardinals defender outside the left hash, illustrating how much flexibility a true lockdown corner affords a defense.

It's going to be a treat to watch the NFC's best wide receiver – Brandon Marshall – and the NFC's best cornerback – Patrick Peterson – battle this Sunday. Seeing how porous the Bears protection has been, and how much Roberto Garza has struggled against 3-4 fronts, the Bears can expect a lot of pressure up the middle.

Mike Tice would be wise to establish the running game to the boundary early, to set up play-action bootlegs to get Cutler out of the pocket and on the move.