(CBS) Of the seven teams that sought out new head coaches this offseason, none was more prolific in filling its vacancies than the Chicago Bears.

New head coach John Fox was the most experienced candidate on the market and the only new hire to have taken multiple teams to the Super Bowl. The defenses Vic Fangio coordinated in San Francisco over the past four seasons were the only ones to rank in the top five in nine different statistical categories. The offenses Adam Gase coordinated in Denver over the past two seasons were the only ones to accumulate more than a combined 10,000 yards and 1,000 points.

After a promising 2013 season, the Bears endured a precipitous drop in offensive production this past season, following the trend line of the Marc Trestman effect.

While fans shouldn't expect anywhere near the same numbers Gase's offenses generated in Denver, they should relish in the fact that one of the league's brightest young offensive minds is now in Chicago.

Given Peyton Manning's presence in Denver, questions exist about how much Gase impacted those team numbers, but such questions can never be quantified. The fact remains that Gase devised the game plans and called in the plays, and his exposure to Manning over the past three seasons is nothing but a benefit to his growth as a coordinator.

Denver started to accumulate some potent offensive weapons prior to Manning's arrival. He simply became the ideal on-field orchestrator to make everything work in concert. The Broncos evolved into one of the best passing offenses in league history with astute pre-snap blitz and coverage recognition aided by formation shifts and motion, combined with fine-tuned route combinations that include rub and spacing elements which Manning threw with precise anticipation and ball location.

What stands out about Gase is his ability to create ideal matchups for his best weapons, the self-scouting measures he takes to introduce wrinkles into base concepts and his willingness to reinvent the offense out of necessity.

Let's step inside the film room to take a closer look at Gase's offense using All-22 coaches' film.

Gase's advanced scouting of opponents to understand which personnel they'll counter with and how they'll align to formations is one of his biggest assets.

The first example comes from the Broncos-49ers game. The Broncos come out in 11 personnel in a 3-by-2 empty set. The 49ers counter with nickel personnel in a 3-3-5 alignment with a single-high safety in Cover-1 (man-free) coverage. 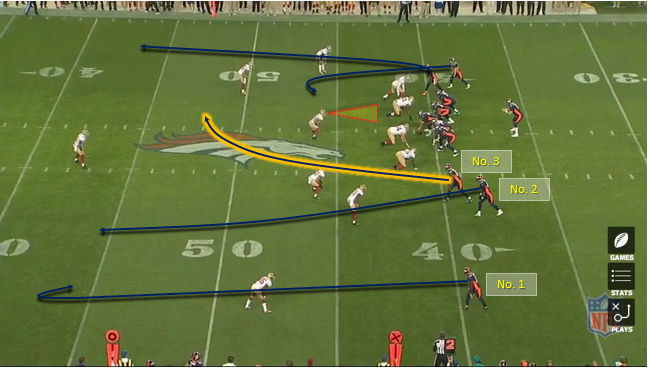 By lining up wide receiver Demaryius Thomas as the No. 3 receiver (in football terms, defenses consider the receiver closest to the sidelines as the No. 1 in a formation) on the three-wide side of the field, Gase gets the exact look he anticipated. The 49ers line up linebacker Michael Wilhoite across from Thomas, which is a decided advantage for the Broncos that Manning spots immediately. 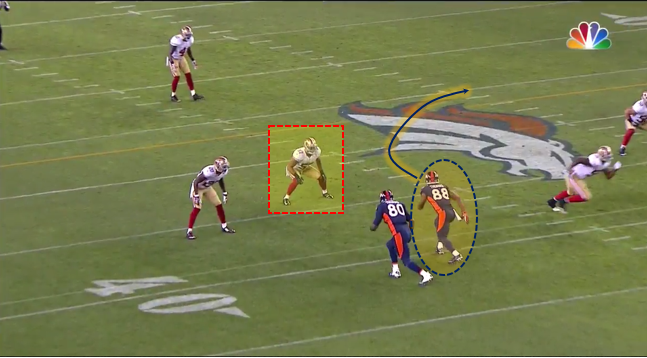 Tight end Julius Thomas (the No. 2 wide receiver) runs a vertical clear-out to occupy the free safety. On the two-receiver side, Emmanuel Sanders runs a vertical route to clear out the cornerback, while Wes Welker runs a quick hitch.

Not only does Demaryius Thomas beat Wilhoite off the snap, but the route combination creates a huge void in the intermediate area on the right side of the defense for him to settle in on an over route for an easy pitch-and-catch 32-yard completion.

The next example comes from the Broncos-Colts game. The Broncos come out in 12 personnel in a unit wing slot left formation with tight end Julius Thomas on the line in a three-point stance as the "Y" receiver. The Colts counter with base 4-3 personnel in an under front. 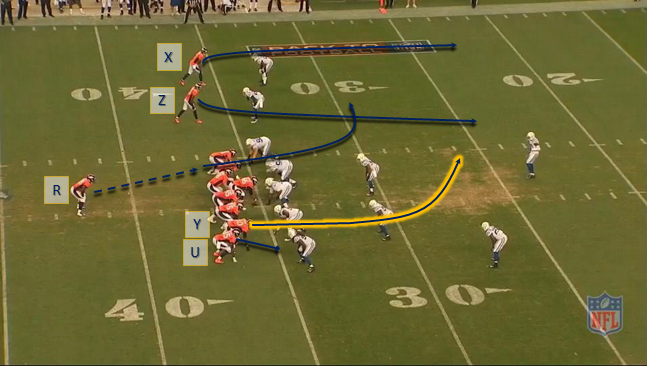 Once again, Gase gets the exact matchup he was seeking, as the Colts match up linebacker D'Qwell Jackson on Julius Thomas, which is another clear coverage mismatch that favors the Broncos. 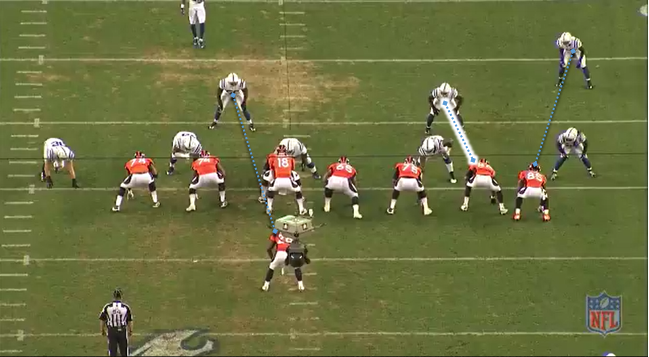 The Broncos clear out with Demaryius Thomas and Sanders running vertical routes on the two-receiver side of the field. Julius Thomas beats Jackson with speed off the snap and gains inside leverage on a Y-cross/corner route into the empty void and connects on a 35-yard touchdown reception. 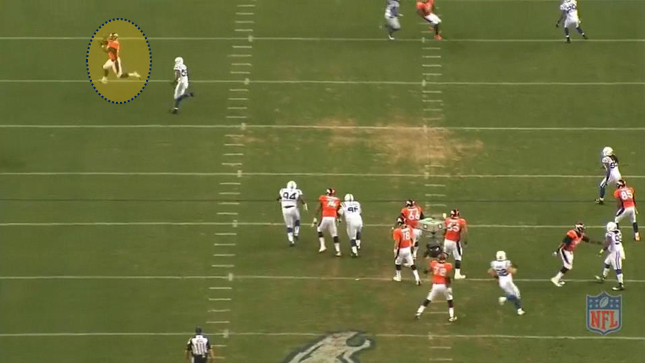 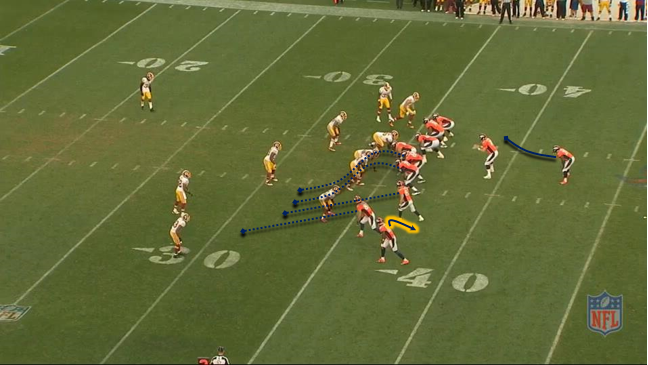 This scheme was sometimes used off of play-action (shown above), but Manning heavily used this scheme when he recognized pre-snap blitzes, saw a numerical advantage on the perimeter (how many secondary players are lined up over receievers) or got man coverage recognition using pre-snap motion and shifts.

Gase clearly self-scouted the Broncos' tendencies -- what the numbers indicate they do from certain formations at certain points on the field or down and distance situations -- as he built in some effective wrinkles off of the scheme that led to several explosive plays.

The first example comes from the Broncos-Jaguars game in 2013. The Broncos deploy 11 personnel in a 3-by-1 trips right formation. The Jaguars respond with nickel personnel in a 4-2-5 alignment, rushing four and dropping seven into a Cover-2 shell. 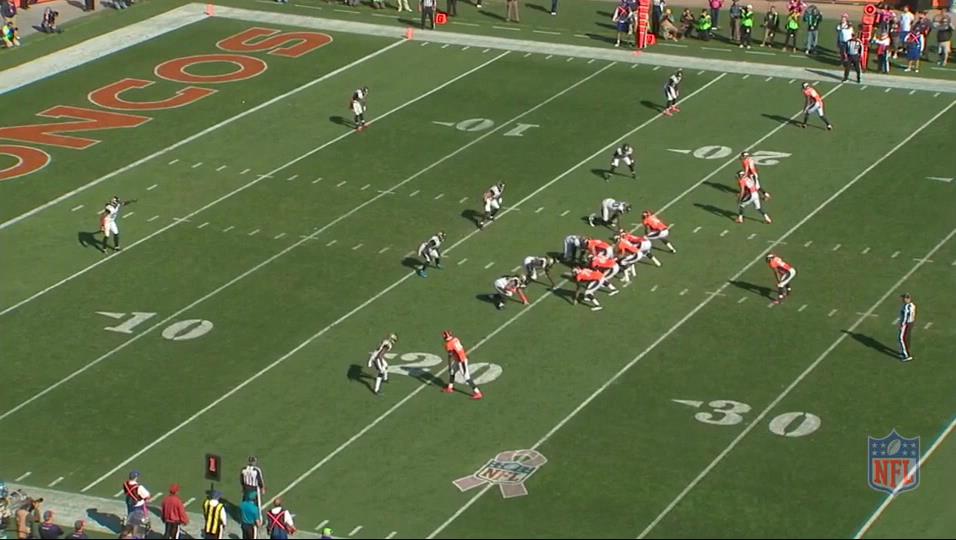 The Broncos show a bubble screen to Eric Decker, which draws in two underneath defenders. Meanwhile, Demaryius Thomas and Welker slip their blocks and run two verticals up the field. 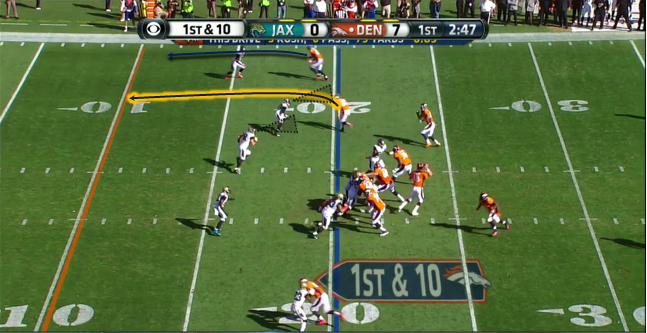 Welker is left uncovered up the seam, and Manning drops the ball into the passing window on a 20-yard touchdown. 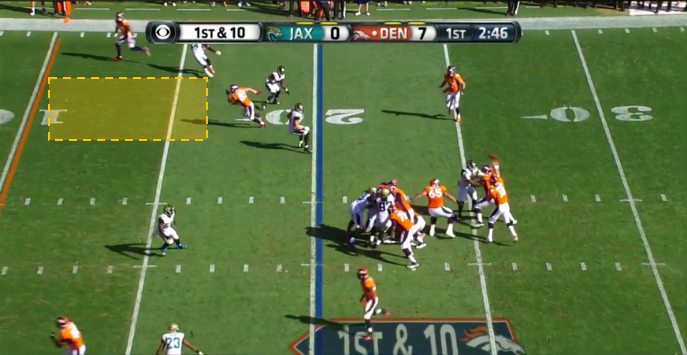 The Broncos showed similar wrinkles on their tunnel screen game, allowing receivers to slip their blocks and again run two verticals up the field as underneath defenders close on the screen action.

Here's an example from the Broncos-Ravens game in 2013. The Broncos deploy 11 personnel in a 3-by-1 set -- which they used frequently in the red zone, along with bunched sets -- and the Ravens counter with nickel personnel in a 4-2-5 alignment with split safeties. 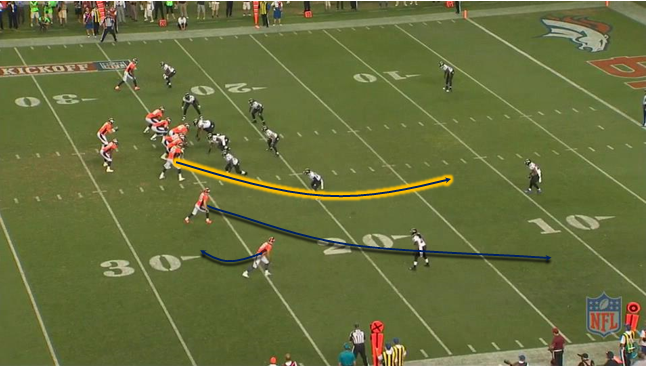 The Broncos fake the tunnel screen to Decker, again drawing the underneath defenders. 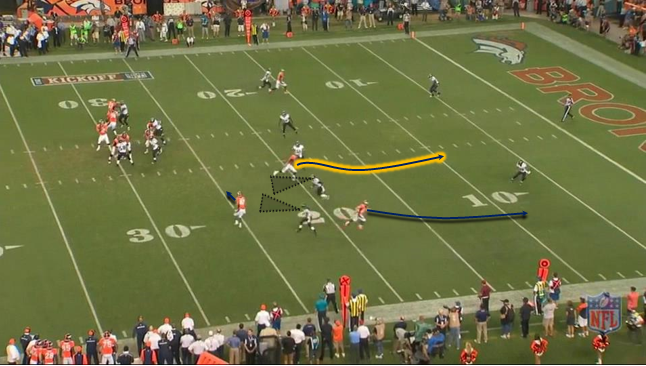 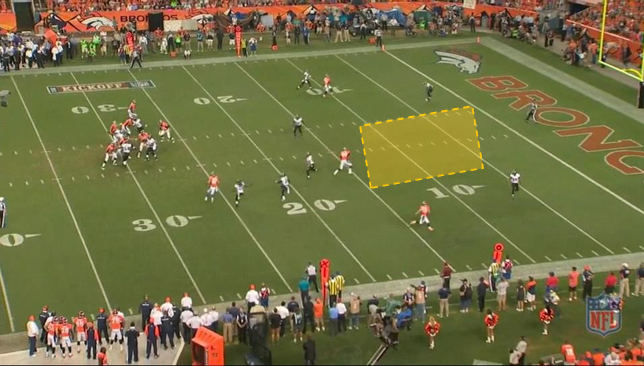 Near the end of this past season, the Broncos endured some health issues. Julius Thomas suffered an ankle injury that sidelined him for a few games. In parallel, Manning started to lose a little velocity on his passes and suffered a late-season thigh injury. Thus, Gase converted the Broncos into more of a power running team, frequently utilizing a sixth offensive lineman in place of Julius Thomas. 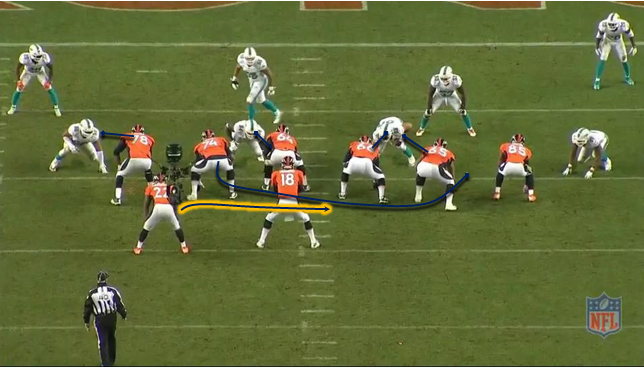 The end result was third-string running back C.J. Anderson averaging nearly 130 rushing yards per game over the final five games of the season.

Rather than trying to continue running the offense without its full complement of weapons, Gase adapted his offense, and the Broncos went 4-1 over that stretch at less than full strength. 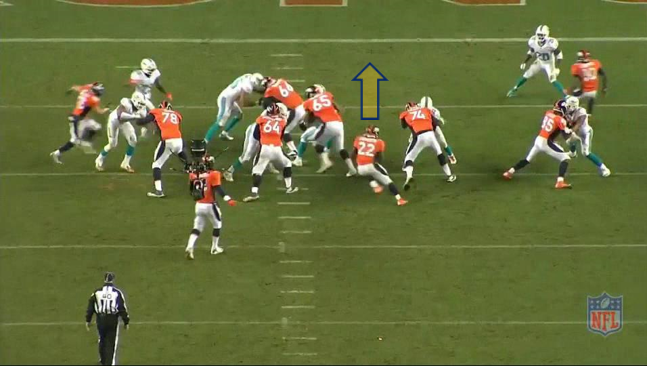 It will be interesting to see what sort of offense Gase devises in Chicago. The downfield blocking prowess of the Bears' current crop of wide receivers works well with the screen game and mesh concepts over the middle of the field. The Bears also have a coverage mismatch with tight end Martellus Bennett.

However, the Bears lack a speed component at wide receiver and will need to add another running back who can run between the tackles in short-yardage situations.

The bottom line is, the Bears are in far better hands with their current coaching staff than they were just a month ago. The real challenge now falls on the shoulders of general manager Ryan Pace to reshape the roster and procure the necessary talent to effectively run the new schemes on both sides of the ball.