(CBS) During an NFL broadcast you're assured of hearing commentators reflexively dropping phrases like "gap integrity," "run fits," "alignments," and "fronts," assuming their audience is following along.

Considering most of them are former coaches and players, this comes as no surprise, as it's their common vernacular.

But what does it all mean?

I rejoiced when the NFL decided to make coaches film (All-22) available to the general public. Not only is it a new revenue stream for the league, it also affords football nerds like yours truly the opportunity to better teach and demystify aspects of the game we all love. I'm also guilty of using chalk talk in my playbook series, so I'm taking a step back to the basics.

Skill position players sell tickets, but games are won and lost at the line of scrimmage. So today's focus will be on line play, specifically alignments, techniques, and gap responsibilities.

Using the illustration below, let's get started with gaps (letters in white) and techniques (numbers/letters in yellow), and talk about what they mean and why they're used.

The offense looks to protect these gaps and uses them as the aiming point for the running game. The defense looks to fill these gaps versus the run or "fit" a player into each of them, and uses them as the aiming point on blitzes. When a defensive player overpursues, is late to fill, or isn't assignment sound, the defense has lost "gap integrity" on the play, which creates running lanes for the offense.

When designating linebacker alignments, an additional number is added. For example a linebacker in a "two-technique" is in a 20-alignment, or a "two-i technique" is a 21-alignment. If a safety is "brought into the box" as an extra run defender and lined up on to the outside of a tight end, they're in a 90-alignment.

The primary difference between a 4-3 or "even" front and a 3-4 or "odd" front is gap responsibility. Typically, 4-3 teams assign one-gap responsibility, whereas 3-4 teams assign two-gaps. I chose the Seahawks for the first example, as schematically, they're one of the most creative, dynamic fronts in the NFL.

The Seahawks – as well as teams like the Patriots, Texans, and Ravens – run a hybrid scheme that combines both one and two-gap assignments in a 4-3 front. In this front, the Seahawks' "tilted" one-technique and head up six-technique are two-gap players, while their three-technique and nine-technique or "Leo" (open side end) are one-gap players. 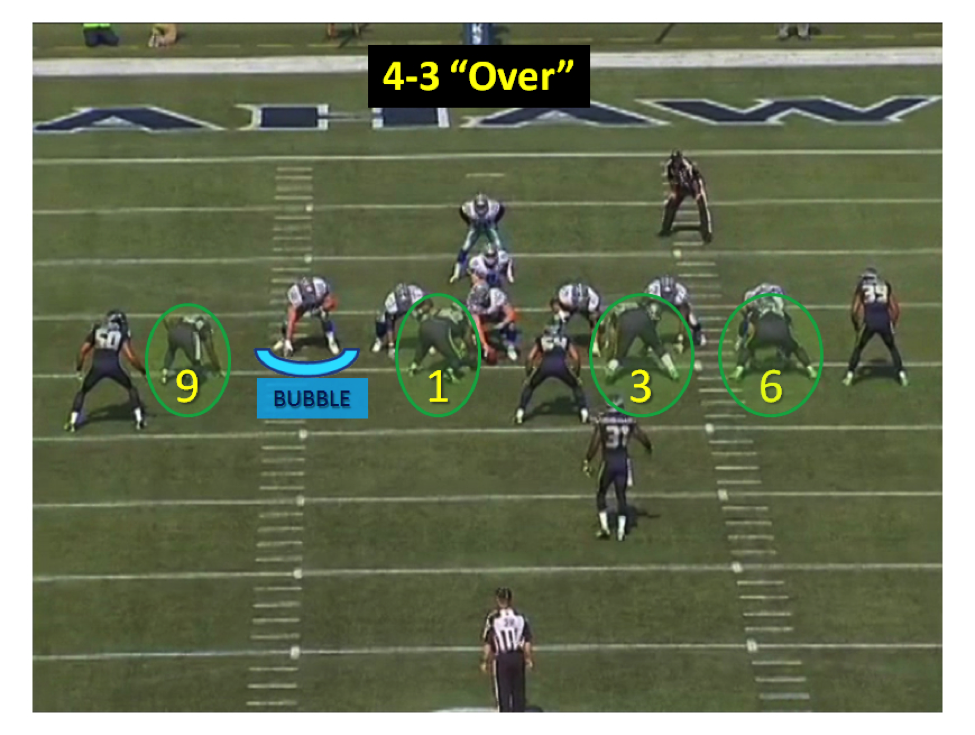 Hybrid schemes are primarily personnel based, and the Seahawks have done an exemplary job assembling complimentary powerful yet nimble run stuffers, with ultra quick tweeners on the edge.

If the defense shifts their techniques to the weak side of the formation, they're aligned in an "under" front, shown by the Bears here. 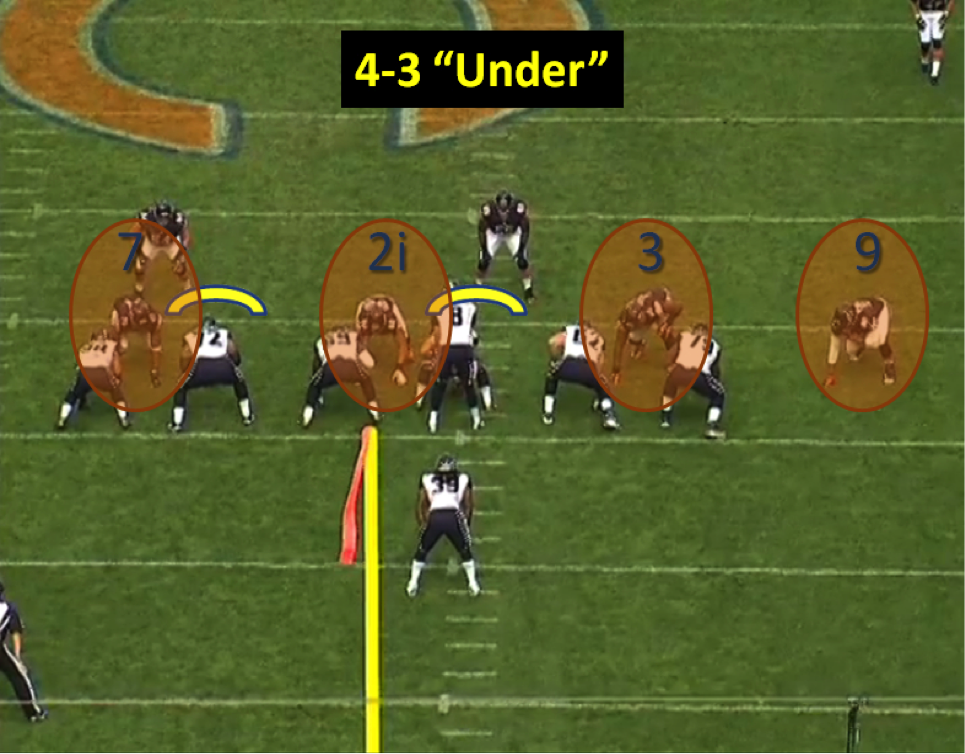 Even though he's on the open side (no tight end) of the formation, Julius Peppers is aligned far enough outside to get the "nine-technique" alignment.

In the example above, Lance Briggs would get the "Mike call" from the center and/or quarterback, meaning he's the middle linebacker in this front and must be accounted for by the offensive line. Chances are the parabolic microphone on the sidelines would've picked up the pre-snap call of "55 is the Mike."

The under front was made popular by Monte Kiffin. By shifting a quick, penetrating one-gap defensive tackle – think Warren Sapp – to the weak side three-technique, he essentially schemed a third defensive end into his front.

Football is all about deception and creating conflict. Teams do their best to show pre-snap looks that confuse their opponent's assignment.

Defensive coordinators will shift their front pre-snap, or run "stunts" (crossing their lineman over/under each other) post-snap to create confusion in the protection. Offensive coordinators will shift a tight end before the snap, or leave defensive lineman unblocked, only to trap them. To echo a point I made in a previous column, while played by hulking men, football is a game of arithmetic and geometry.

This was a very basic, fundamental overview to help decrease any learning curve and hopefully increase your viewing pleasure. We'll take deeper dives as the season progresses.

Questions about this playbook, or suggestions for a future playbook? Follow/Tweet me: @djdurkin