(CBS) Chicago Bears general manager Phil Emery started off 2013 in grand fashion, notching a rare, winning press conference at Halas Hall. Emery was candid, and offered a transparent view into his methodical, objective decision-making process. Fans are justifiably reinvigorated and reassured, knowing Emery sees the same issues they do, but he must now go out and fix them. The first major task for Emery is finding a new head coach.

This is the first in a series where I take a look at some of the top candidates, providing information on their background, strengths, scheme, and what skill position players the Bears would need to add to properly execute their system. First up is Denver Broncos offensive coordinator Mike McCoy.

What is McCoy's NFL coaching experience?

McCoy, a former Division I and World League quarterback, has 13 years of NFL coaching experience. He's primarily been a quarterbacks coach, but he also worked as a wide receivers coach in Carolina, and has been Denver's offensive coordinator for the past three seasons.

Which head coaches McCoy has worked for?

McDaniels gave McCoy his first shot as a play-caller in the 2010 season, when the Broncos ranked 13th in yardage, and 19th in points.

Which notable quarterbacks has McCoy worked with?

Statistically speaking, Manning just completed the second-best regular season of his career. Delhomme and Orton produced the best seasons of their careers when McCoy was their quarterbacks coach.

Adaptability. One of the characteristics Emery mentioned he's looking for in the Bears next head coach is adaptability. McCoy has clearly demonstrated this characteristic over the past two seasons in Denver, reinventing his offense three times, from Orton, to Tebow, to Manning.

It's impossible to find quarterbacks with more opposite skill sets than Tim Tebow and Peyton Manning. The Broncos went from the No. 1 rushing, and No. 31 passing attack in 2011, to the No. 16 rushing, and No. 5 passing attack, yet, amidst the radical shift in philosophy, they're back-to-back AFC West Champions. That's testament to McCoy being malleable enough to adjust his scheme to the talent at his disposal.

Furthermore, having a chance to work with Manning, a first-ballot Hall-of-Famer and unparalleled student of the game, and McDaniels over the past four seasons is a boon for McCoy.

McCoy has spent the majority of his coaching career with John Fox. Fox is a defensive-minded head coach, whose offenses have been primarily run-based schemes, with passing games predicated on play-action.

McCoy's offense this year has been a hybrid of power running, play-action, and a precisely-timed passing attack out of a small set of personnel groupings and formations.

What intrigues me most about the fit between McCoy and Chicago is the existing personnel in the passing game isn't that dissimilar to what he's had to work with over the past four years. None of the teams have had tight ends that require extra attention, nor have they had vertical threats that can blow the top off of a defense.

To adjust to these limitations in personnel, Manning, McDaniels and McCoy are adept at attacking the field horizontally, with crossers at different depths. Let's take a look at some of the route combinations and concepts McCoy uses.

In this play, the Broncos line up in 3WR-1RB-1TE personnel, and the Bengals counter with nickel personnel (5DB-2LB) in a Cover-2 shell.

The Broncos put pressure on the free safety (circled in black) by running two vertical routes to his side, and send the running back on a short out route, taking the Mike linebacker with him, which clears space in the underneath zone. 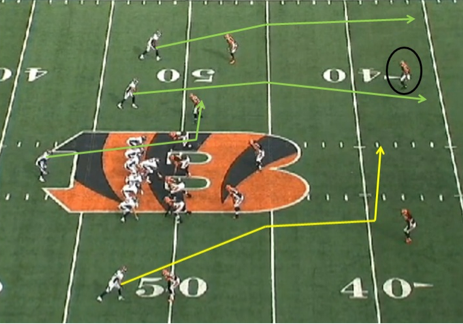 Manning's scans the field deep-to-short. The 9-route by Demaryius Thomas and seam route by Brandon Stokley keeps one safety deep, and the vertical stem of Eric Decker's route keeps the other safety in a backpedal. This creates a huge void in the middle of the defense and an easy completion to Decker on the backside dig. 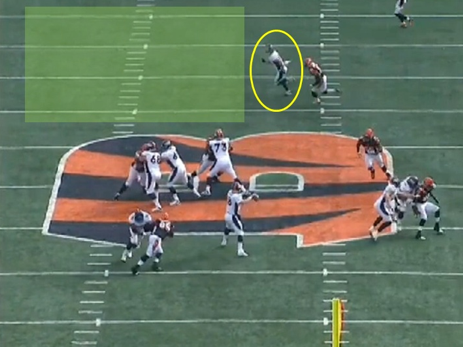 In this red zone example, the Broncos come out in 3WR-1RB-1TE personnel, and the Browns are in dime personnel (6DB-1LB) in Cover-1 man free.

The Broncos motion Decker from a 3 x 1 alignment to a 2 x 2 alignment. By doing this, they're determining if the Browns are in man or zone coverage. 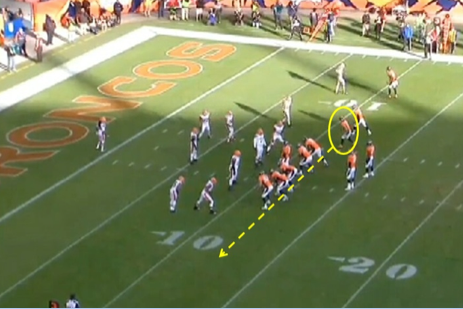 The defender follows Decker to the other side of the formation, so Manning knows he's working against man coverage. 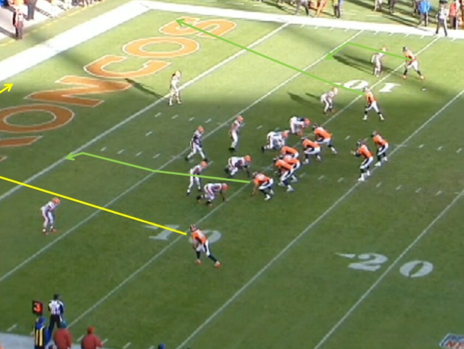 The Broncos route combination attacks the Browns at multiple depths. With the short and medium-level receivers covered, Manning waits for Decker to come open on a deep crossing route for the touchdown. 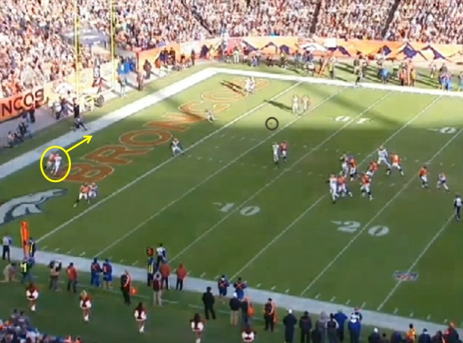 What type of skill position player would the Bears need to add for McCoy?

As evidenced by Emery's "Kellen Davis had a rough year" comment, a tight end would really assist the installation of McCoy's offense. While Thomas is a big-bodied receiver capable of making plays downfield, the Broncos aren't a big-play passing offense. Rather, they meticulously work the ball down the field, with precise timing routes, that typically attack the middle (biggest area) of the field.

What are McCoy's chances to be among the finalists (Good / Fair / Poor)?

Good. McCoy was a finalist for the Dolphins head coaching vacancy last season. Hearing the recent, ringing endorsement from Manning, McCoy is primed to take over an NFL franchise. Having Manning to work with will allow McCoy to be selective, as what's his incentive to leave the Broncos for a team who doesn't have an established quarterback?

Yes, the Bears obviously need help on the offensive line and at tight end, but with a quarterback like Jay Cutler, and a receiver like Brandon Marshall (whom McCoy worked with in 2009), McCoy should be very enticed by the opportunity in Chicago.