(CBS) Marc Trestman's reputation as a quarterback whisperer preceded his arrival in Chicago. Judging by the high level of play from both quarterbacks under center for the Bears in 2013, his prominence was justified.

Quarterback has been long considered -- and remains -- the most important position in all professional sports, so given Trestman's penchant for developing them over his 17-year, eight-city NFL tour, why was it so difficult for him to keep a job for more than three seasons?

A variety of factors, including bad luck, unfortunate timing with lame duck head coaches and personality conflicts. But Bears general manager Phil Emery saw enough in Trestman to hand him the keys and the opportunity to unlock Jay Cutler's physical gifts.

Using quarterback statistics that have the highest correlation to wins and applying them to the quarterbacks Trestman has worked with over his career, some interesting conclusions can be drawn. When you compare the statistics from the season prior to Trestman's arrival to his first year on the job, Cutler has been his best pupil yet.

Granted, it would have been nearly impossible for Steve Young to improve upon his MVP numbers from 1994, but objectively speaking, Cutler is the only to show improvement in every measurable category.

*** Below you will find charts of some of the quarterbacks' progression whom Trestman has worked with. Year 0 represents the year before Trestman arrived, with Year 1 being the first season of Trestman tutelage for the quarterback. In an NFL career that traces back to 1985, Trestman has worked with Steve DeBerg in Tampa Bay, Bernie Kosar in Cleveland, Steve Young in San Francisco, Scott Mitchell in Detroit, Jake Plummer in Arizona and Rich Gannon in Oakland in addition to Cutler.*** 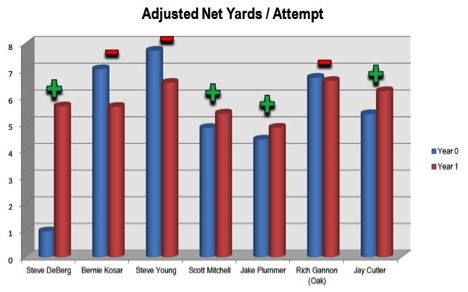 Passer rating has been around since 1973 and involves four variables: completion percentage, yards per attempt, touchdowns per attempt and interceptions per attempt. Each of these variables are scaled from 0 to 2.375 with 1.0 being average. 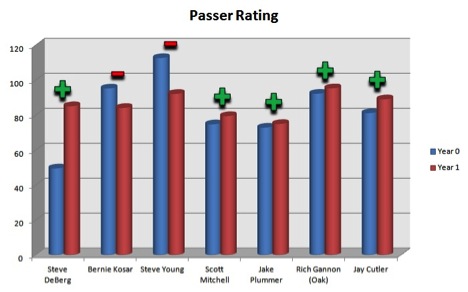 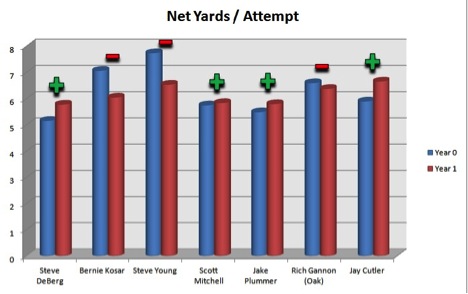 Completion percentage is a straightforward statistic of the number of completions divided by attempts. 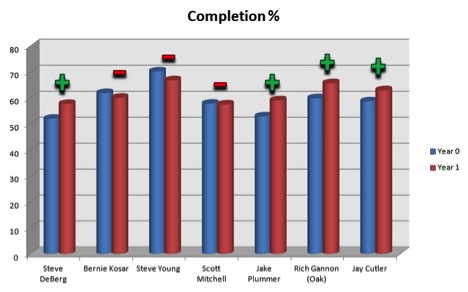 Last training camp, Cutler estimated it would take three years to master Trestman's offense. So it's encouraging to see the progress he made in the eight months he had to get up to speed with new terminology, concepts, protection schemes and audibles (also known as "kill" calls). While it's a leap to assume something similar will happen again with Cutler, it's worth noting that in year two with Trestman, Rich Gannon became the league's MVP.

Trestman's tutelage and offensive system deserve the lion's share of credit for Cutler's progress. However, credit also extends to the personnel departments for procuring better offensive line talent, the hire of Aaron Kromer (whom Trestman worked with in Oakland from 2001 to 2003) and the emergence of budding star wide receiver Alshon Jeffery.

Obviously, Cutler is flawed. Then again, if you're a fan of a team other than the Packers, Patriots, Saints or Broncos, this statement applies. Despite his flaws, Cutler is a quarterback you can win with.

Cutler's mechanics can wane, and he has a tendency to rely a bit too much on his arm strength and attempts to fit passes into tight windows late in his progressions. These are the areas Trestman must break through in order to get the most of his franchise quarterback.

Cutler was awarded a seven-year contract this offseason, of which three years are fully guaranteed at $54 million. The latter portion of that is key, as by making the deal essentially a three-year contract, Cutler's on the same timetable as Trestman.

The ultimate success or failure of this team relies on the growth of this relationship. The focus of this offseason is about rebuilding the defense; however, once the season starts, games will be decided by the play of Cutler more than anything else.

Perhaps this is a situation in which a coach and player were aligned at the right moment of their respective careers?

For Bears fans, that's the hope.