(CBS) There was a collective groan among Bears fans when Roger Goodell announced the selection of Shea McClellin with the 19th pick in the 2012 draft. The position wasn't being scrutinized, the player was.

McClellin was a "late riser" in the draft process. His speed at the combine (4.63) and versatility at Boise State - he typically started games at Mike-backer and moved to defensive end in sub packages – catapulted him from a third/fourth round prospect to the first-round.

Conspiracy theories sprouted like weeds. Was this pick a sign of a scheme change? Was McClellin the heir apparent to Brian Urlacher?

Bears general manager Phil Emery had familiarity with McClellin from his time in Kansas City, where he was scouted as a 3-4 rush linebacker. In Chicago, McClellin was dubbed "instant pass rush," as a hand-on-the-ground defensive end, but is that how his rookie year worked out?

After reviewing every snap McClellin logged in 2012, here's my summary of how he was utilized, what impressed me, what didn't impress me, areas for improvement, and what his prospects are for the 2013 season.

The Bears used McClellin primarily as a situational pass rusher. Per ProFootballFocus, he was on the field for 271 pass-rush snaps (74% of his total snaps), of which he actually rushed the passer 257 times (146 at right defensive end, and 111 at left defensive end).

In 13 games, he registered 22 hurries, four quarterback hits, and 2.5 sacks, which averages out to one disruption – hit, hurry, sack - every 11 pass rushes.

Occasionally, McClellin was used as a linebacker/quarterback spy in nickel sub packages, lining up in a two-point stance in the A or B-gap feigning a blitz, and in some instances dropping into coverage against a tight end.

Quickness off the snap. McClellin has a quick get off and burst off the snap, which put offensive tackles on their heels and forced them to accelerate their kick slide. This quickness allows McClellin to "bend the edge" and take a more direct path to the quarterback.

Footwork. McClellin was at his best when he set up his blockers with his feet, similar to what a wide receiver does to evade press coverage at the line. While he's certainly nowhere near as polished or crafty, when he did use his feet properly, McClellin reminded me - at times - of former Raven/current Brown Paul Kruger.

Here's an example of McClellin using his feet to his advantage against Colts left tackle Anthony Costanzo. 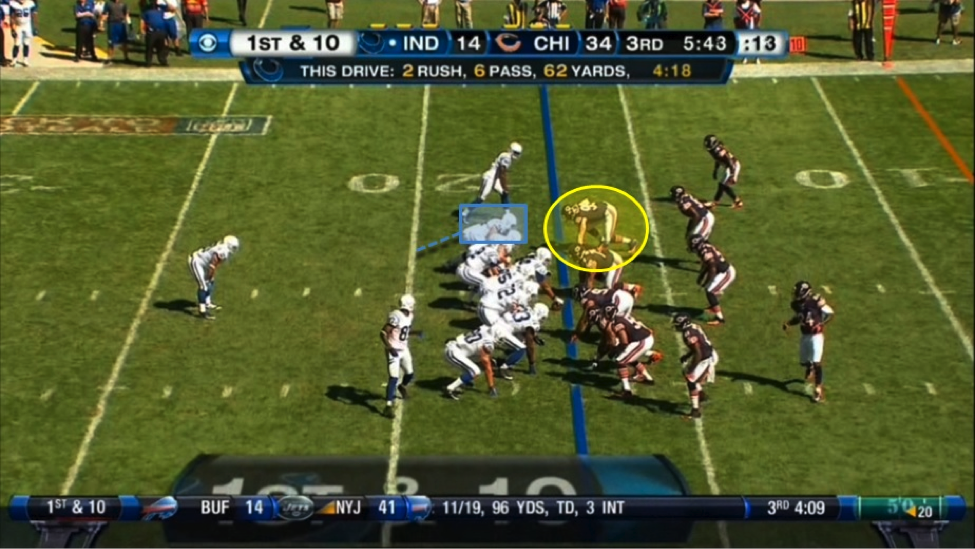 Prior to engaging, McClellin plants hard to his right. 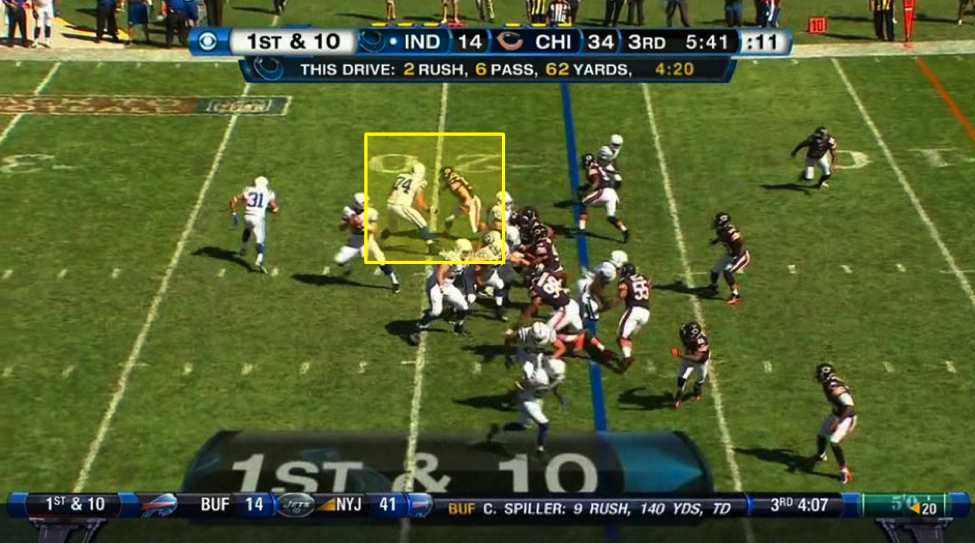 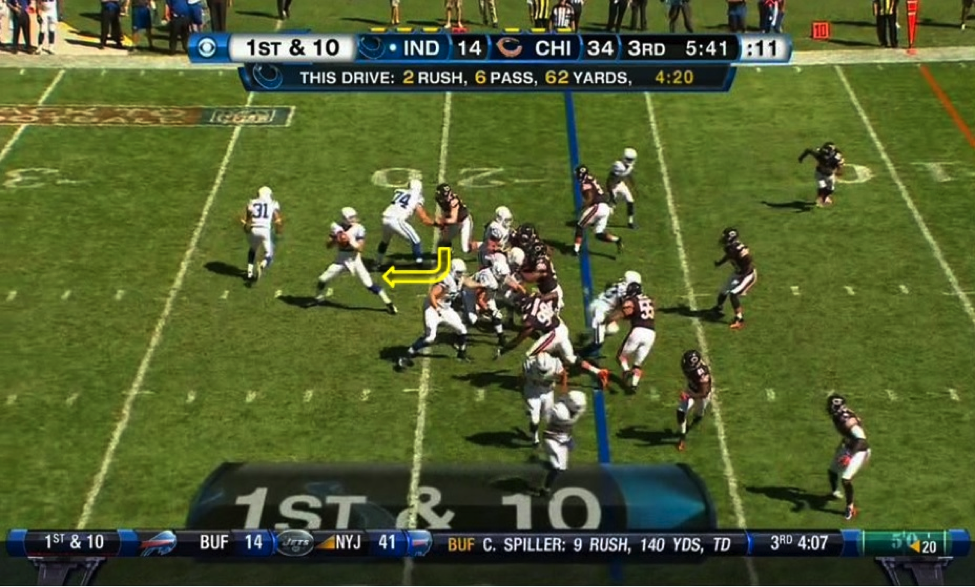 McClellin hurries Andrew Luck's progression and gets him off of his launch point, leading to a red-zone incompletion. 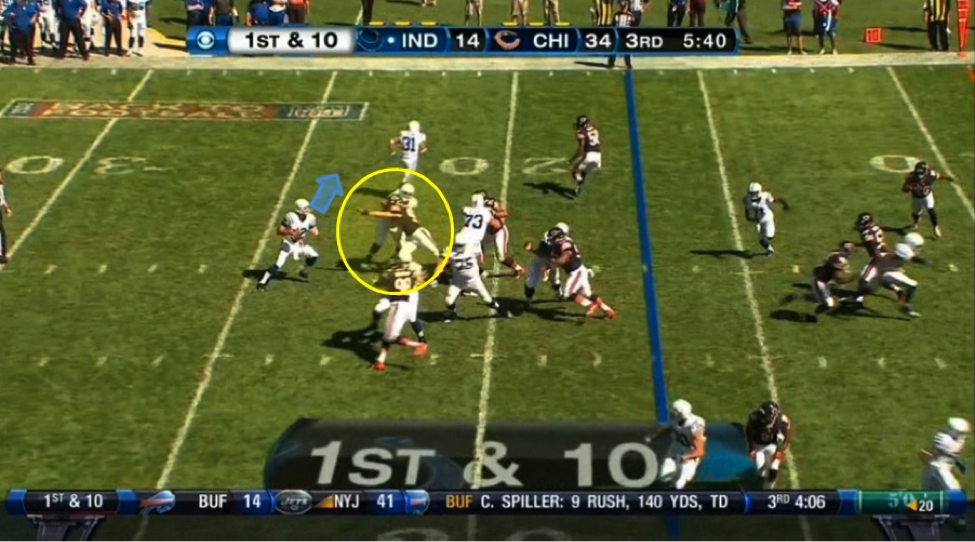 Run defense. Simply put, McClellin was a total liability against the run. He was rarely able to set the edge and maintain gap integrity. Teams single blocked him with tight ends, tied him up, and turned him out of the hole.

Here's an example of McClellin being unable to set the edge against the Jaguars. McClellin is lined head up on tight end Marcedes Lewis. 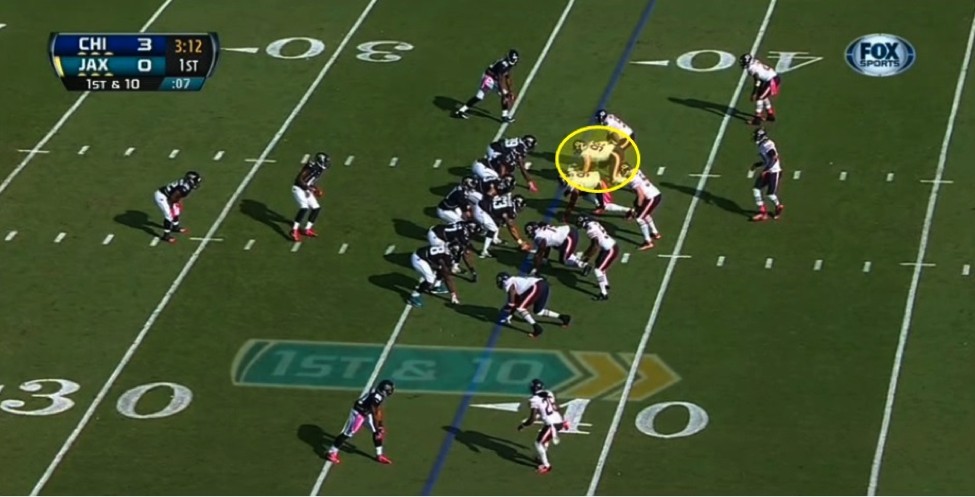 Lewis is able to control McClellin and wash him away from the ball carrier. 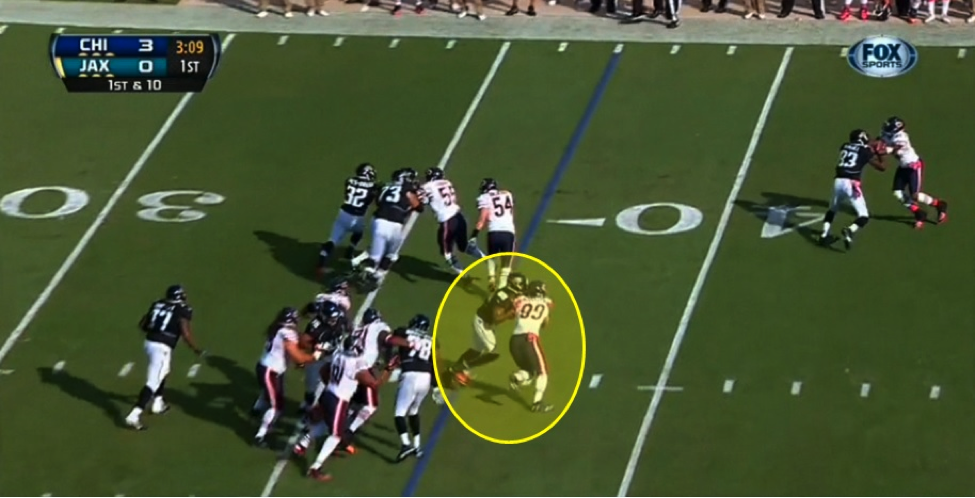 Maurice Jones-Drew chose to bounce this outside for a 20-yard gain; however, had he been a bit more patient he could've run through this lane created by Lewis sealing off the edge. 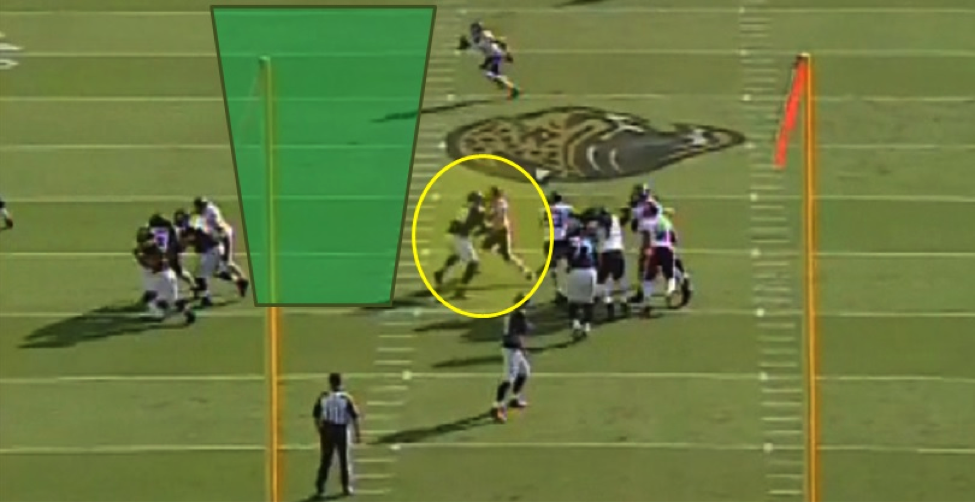 Limited pass rush moves. McClellin's only effective pass rush move was the spin, which he relied on far too often. Early on in the season - before teams had game film on him - his quick outside spin caught blockers off guard. However, over time, blockers anticipated this attack and waited for McClellin to come to them rather than initiating the first contact.

Functional strength. McClellin had the lowest bench press total at the combine (19 reps), and it showed up on film. McClellin was frequently unable to control single blockers at the point of attack. McClellin has put on eight pounds this offseason, but how this translates to his play on the field remains to be seen.

Hand-fighting. Related to functional strength, McClellin needs to become more violent and active with his hands, to prevent blockers from getting to his pads first. The best hand fighters in the NFL - my vote goes to Tamba Hali - force blockers to alter their hand placement, and don't allow them to get to their body. Pass rushing with a plan. With few exceptions, McClellin didn't seem to have a plan of attack to beat his opponent. He would simply line up, execute an outside speed/bull rush, and be unable to disengage. Shea would be wise to pick the brain of Julius Peppers, a player with rare athletic ability who keeps blockers guessing with a variety of pass rush angles and moves.

After a promising start (two total sacks in his first two games), McClellin's rookie year ended up being a disappointment. Based on last season's performance, McClellin's deficiencies as a run stopper could prevent him from being an effective three-down defensive end. Even so, the Bears will force feed him reps to see exactly what they have.

With Peppers entering his 12th season and consuming a large percentage of the salary cap over the next three seasons, Israel Idonije in Detroit, and Corey Wootton in a contract year, there's a lot of pressure on McClellin to perform and justify his draft status. Athleticism isn't a question, savvy and strength – which can be developed over time - are.