(CBS) ​Since entering the league in 2004, new Bears defensive end Jared Allen's 128.5 sacks are the most of all players over that time span. Allen turned 32 yesterday, but the hope is he has a few more productive years left.

There is recent precedent for success from 32-year-old sack artists. Twice since 2003, the NFL sack leader has been 32 years old -- Michael Strahan in 2003 and just this past season, when Robert Mathis led the league with 19.5 sacks.

After watching tape from his 2013 campaign, it's safe to say Allen's odds of leading the league in sacks – a feat he accomplished in the 2007 and 2011 seasons – are slim. It's also safe to assume the Bears aren't under this assumption either, given the structure of his new contract.

Let's go to the film room to take a look at some aspects of Allen's game that may have piqued the interest of the Bears' personnel department.

What Allen has lost in his quick get-off, he makes up for it with instinct. Allen is notorious for his preparation and film study, which can help preserve and prolong the career of veteran players who need to rely more on football smarts as their physical gifts dissipate.

In this example against the Lions, Allen reads the pre-snap action and a formation alert to lead him to the ball.

The Lions motion running back Reggie Bush from a split backfield to a 3-by-1 stacked alignment.

Given the formation, personnel grouping, and the down and distance – second-and-10 – this is an automatic alert to a bubble screen, and Allen sniffs it out. 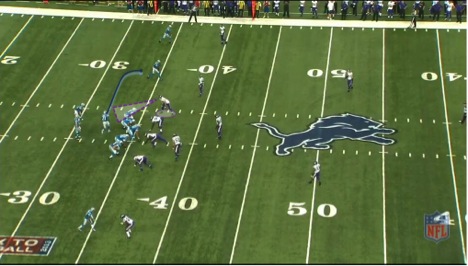 Rather than bending the edge to shorten his path to the quarterback, Allen makes a contain rush up the field and reads the eyes and backfield action of Lions quarterback Matt Stafford. 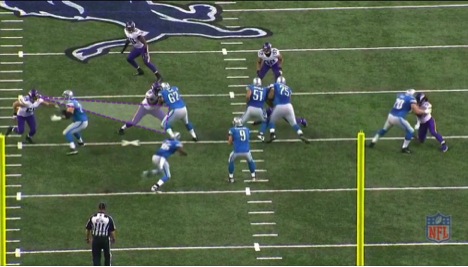 Stafford attempts to quickly get the ball out to Bush on the perimeter, but Allen positions himself in the passing lane to deflect the pass and force a third-and-long situation. 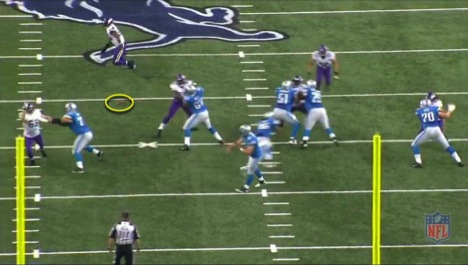 Vision and film preparation to understand formation tendencies were the reason Allen won this down. Allen made a similar play later on in this game, as well as the Vikings' second matchup against the Lions, each time correctly diagnosing the pre-snap action.

Here's another example from the Vikings-Bears game. (This play happened after Allen had already beaten left tackle Jermon Bushrod earlier in the game, setting him up with an outside rush only to beat him back across his face with a powerful rip move on a strip-sack touchdown of Jay Cutler.)

The Bears come out in '11' personnel in a 3-by-1 alignment, bringing flanker Alshon Jeffery in short 'Z' motion towards the open side of the formation.

The Vikings are in nickel personnel in an 'over' front with Allen lined up in a weak-side five-technique. 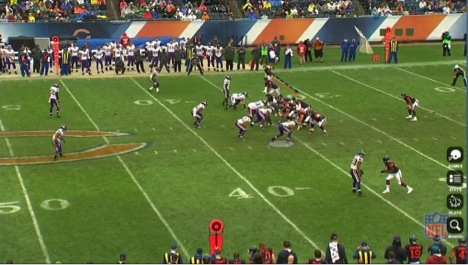 The Bears show a handoff to Matt Forte through the front-side A-gap, and Cutler pulls the ball and hands it off to Jeffery on an end-around.

Again, Allen avoids "taking the bait" and crashing down on the hand-off to Forte. Instead he properly plays backside contain, putting himself in a position to either make the play himself or force the run back inside to his help. 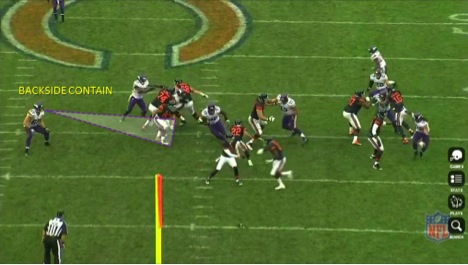 Allen keeps a wide base and uses a "feather" technique (mirroring Jeffery laterally) to string the play out, dropping Jeffery for an eight-yard loss. 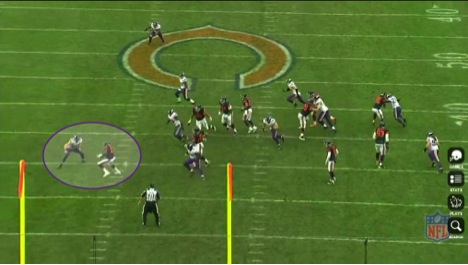 Allen also shows a knack for anticipating snap counts and keeping an eye on the play clock to gain any split-second advantage he can on his opponent.

While Allen has a developed arsenal of pass rush moves, he's primarily a bull rusher who wins with leverage and technique.

Patience is something pass rushers develop over time. Instead of being in a hurry to speed up his engagements with blockers, Allen waits to strike with his hands, ensuring his lower body is anchored and ready to transfer speed into power and stay under the blocker's pads to gain leverage.

Allen is four steps into his pass rush before he engages with Peters, keeping his elbows and hands inside. 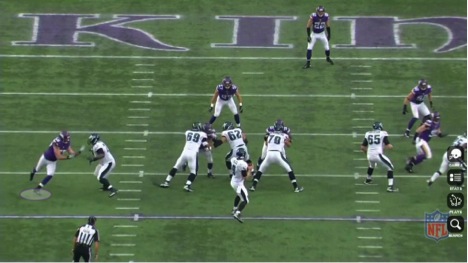 Allen delivers a violent punch, getting underneath Peters' pads to get him off balance and gain leverage to press the pocket from the outside. 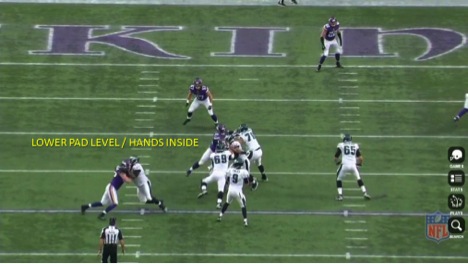 Finally, he wins the hand fight and makes his way to quarterback Nick Foles. 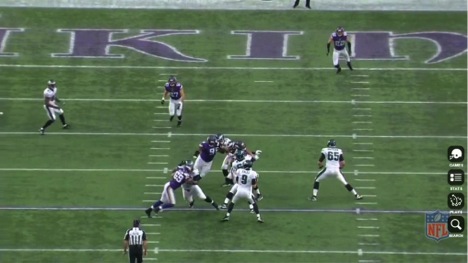 When double-teamed, Allen naturally turns his hips into the double to give the blockers less surface area to strike while "splitting" them.

Endless effort has been Allen's calling card throughout his career. Despite logging the third most snaps for 4-3 defensive ends (per ProFootballFocus) in 2013 and 6,284 total snaps in his six seasons with Minnesota, Allen was playing with just as much effort in Week 17 of last season as he did in the season opener.

Here's a perfect example from the Giants game that embodies everything that Allen is as a player.

Allen is matched up with Giants left tackle Will Beatty. 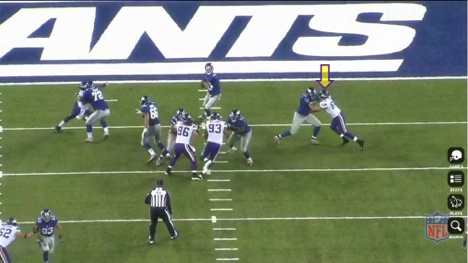 This engagement was largely a stalemate, however, Allen kept his legs moving, which sounds elementary, but it's shocking how many pass rushers stop their feet when stalled in their rush.

Allen works his way close enough to Giants quarterback Eli Manning to reach an arm under and around Beatty to grab Manning's jersey. 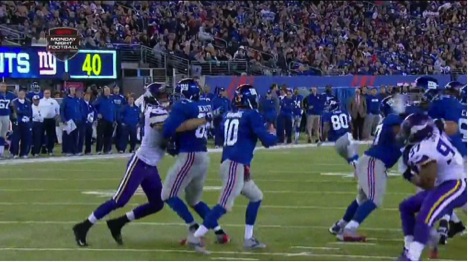 Affectionately referred to as the "Space Cowboy," Allen uses a rodeo technique to bring Manning down, meaning he momentarily left his feet to use all of his weight to get Manning to the ground. 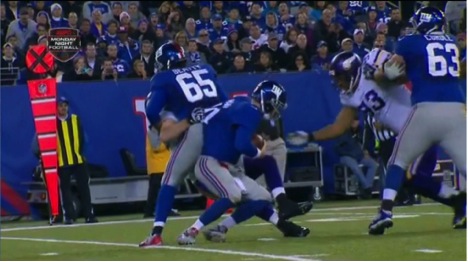 The grip strength required to make a play like this is stunning. Manning is 6-foot-4 and 218 pounds, while Beatty is 6-foot-5 and 319 pounds, yet Allen did his job and got the quarterback on the ground.

It's plays like this that add to the legacy of a potential Hall of Fame career. Allen's personality will make him a fan favorite, but his dedication to his craft will serve as a positive influence on the young defensive ends the Bears brought in, Lamarr Houston and Willie Young.

Allen may not produce in Chicago like he has in Kansas City and Minnesota. However, he's clearly still an instinctive and effective player who must be accounted for on every snap, with something left in the tank and brings legitimacy to the Bears' reshaped defensive line.