(CBS) One of the biggest offseason storylines for the Bears was answered this week on the team's official website, when they confirmed they will remain a 4-3 base defense.

This proclamation matches what general manager Phil Emery has said several times about the Bears remaining a 40-front, but needing to be more "multiple" with their looks.

The term "hybrid" has also been freely tossed around, but what does it all mean? Well, there's no better source of empirical data than game tape, so let's step inside the film room and define these terms in this edition of Football 101.

Being "multiple" with your looks means giving the offense a variety of looks and fronts within the course of a game.

Let's look at some cut-ups taken from a single series played by the New Orleans Saints - coordinated by Rob Ryan - against the Atlanta Falcons.

On this snap, the Saints come out in a "Big Nickel" package, which consists of five defensive backs, three of which are safeties, giving it the "big" designation. They're aligned in a 3-3-5 look, with safeties Roman Harper (#41) and Kenny Vaccaro (#32) walked up into the box and linebacker Parys Haralson (#98) in a two-point stance as the "Will" backer, forming a six-man line. 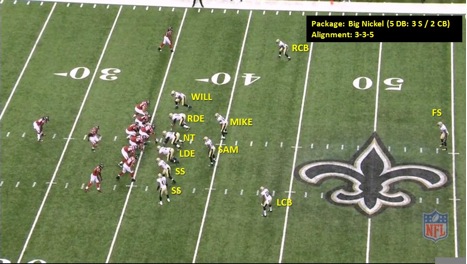 The down lineman are "shaded" with their techniques, with the defensive ends aligned as three-techniques with one gap responsibility and the nose two-gapping from a one-technique. The remaining gaps are accounted for by linebackers and safeties.

This front gives the Saints flexibility to defend both the run and pass on this particular play. 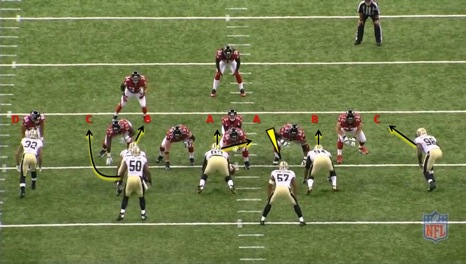 On the next snap, the Saints come out in a "Big Dime" package, which consists of six defensive backs, evenly split between safeties and cornerbacks. They're aligned in a 4-1-6 look, with Vaccaro, Harper and middle linebacker Curtis Lofton in the box again forming a six-man line. 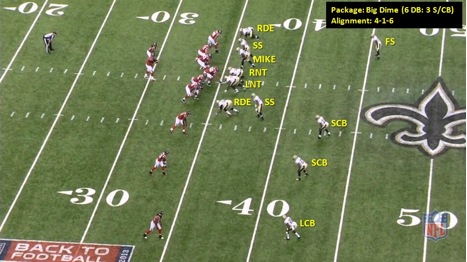 This unique look creates confusion with the Falcons' protection scheme. The Saints have two nose tackles shading the center in a "mug" (double-A gap pressure) look, Lofton and Harper filling the strong-side B and C gaps and their defensive ends in wide-nine techniques. 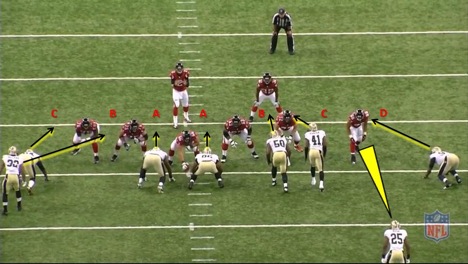 The Falcons have a pass play called with tight end Tony Gonzalez involved in the route combination, so this leaves the Falcons with only six blockers to account for seven pass rushers. The free rusher flushes Matt Ryan from the pocket, getting him off of his launch point.

This look threw off the Falcons' protection count, which was exactly what the Saints sought out to do. Two snaps, two completely different fronts with a different combination of personnel and assignments. This is what it means to be "multiple" as a defense.

Still with me? Good. Let's keep going and look at some tape to help illustrate.

Under defensive coordinator Wade Phillips, the Houston Texans executed a 3-4 hybrid scheme that deployed both one- and two-gap responsibilities. Having a dynamic "hybrid" talent like defensive tackle J.J. Watt affords flexibility, and Phillips schemed accordingly.

Against the Chargers, the Texans line up with Watt and nose tackle Terrell McClain lined head up on offensive lineman in four- and zero-techniques, respectively. Right defensive end Keith Browner is lined up as a weak-side three-technique, flanked by outside linebacker Whitney Mercilus.

Despite being lined up in a traditional two-gap technique, Watt is going to one-gap, shooting the strongside B-gap at the snap of the ball. 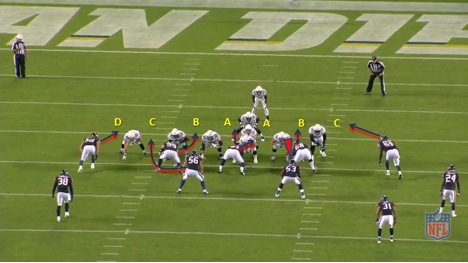 With McClain occupying the center, Watt splits the guard and tackle, forcing a double team, which leaves the Texans with more defenders to fill the playside C-gap, stopping running back Ryan Mathews in the hole. 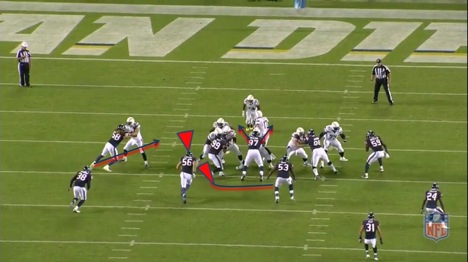 Utilizing Watt's rare first-step quickness presses the line of scrimmage from the inside, allowing linebacker Brian Cushing (#56) to be the force defender with linebacker Joe Mays (#53) scraping over the top and strong safety Danieal Manning (#38) filling.

Here's an example of a 4-3 hybrid look from the Super Bowl champion Seattle Seahawks against the Arizona Cardinals.

The Seahawks have defensive ends Red Bryant (#79) and Tony McDaniel (#99) lined up as two-gap six- and four-techniques respectively, with nose tackle Brandon Mebane (#92) shaded as a one-gap one-technique and defensive tackle Clinton McDonald (#69) as a one-gap three-technique. 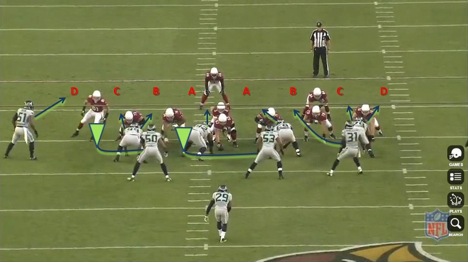 The Cardinals run Power-O to the defense's left, but with McDaniel and Mebane occupying four blockers, the Seahawks outnumber the Cardinals' pulling guard and offset fullback at the point of attack with their filling linebackers and scraping safety Kam Chancellor. 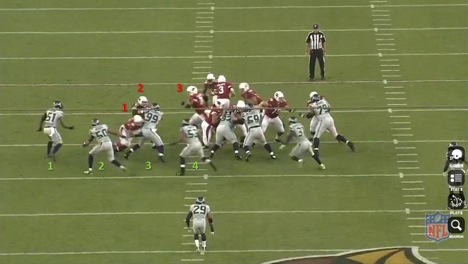 Running the ball in the NFL is predicated on the simple arithmetic of getting more people to an area of the field faster than your opponent, and the Seahawks' space-clogging defensive linemen occupied more blockers than the Cardinals had on this play and several plays this game. In the end, the Seahawks smothered the Cardinals' run game, holding them to just 30 rushing yards on 18 carries.

Teams that are consistently successful in the NFL are what they need to be on a week-to-week, play-by-play basis in order to win.

For the Bears, clearly the focus of this offseason is rebuilding a downtrodden defense. They've spent a decade's worth of resources, draft picks, free agent money and player development time to build a Tampa 2 scheme that favors quicker, one-gap defensive linemen.

Thus, in order to become more multiple with their defensive fronts and run some hybrid looks, it requires pliability from coaches and players. The personnel department must acquire players with a more versatile skill set that allows them to transcend scheme, and coaches must adapt to the unique talents of their personnel.

Finding that intersection point where both the offense and defense are capable enough to contend for a championship is the challenge every NFL team faces on a year-to-year basis. The challenge now for the Bears is, how quickly can they rebuild the defense to catch up with the offense?