(CBS) For the sixth time in seven years, the Bears are spectators for the NFL playoffs.

Finding that intersection point where there's comparable talent on both sides of the ball has proven to be elusive for the Bears.

In two years on the job, general manager Phil Emery has successfully retooled both the personnel and philosophy on offense. The focus now shifts to reimagining a downtrodden defense that produced a league-low 31 sacks and was used as a doormat by opposing running backs to the tune of 2,583 rushing yards.

Even though a Super Bowl champion has yet to be crowned, the reload for 2014 has already begun at Halas Hall.

Throw in $1.45 million in dead money from deals gone bad - think Gabe Carimi, Evan Rodriguez, Brandon Hardin - and an estimated carryover credit of $796,000, and Emery's left with approximately $12.8 million of cap space to work with between now and training camp.

Surely, questions are percolating. How have the Bears already spent nearly 90 percent of their salary cap? How are they positioned for the upcoming free agency period that starts on March 11th? How might they navigate the cap this offseason to create more space to increase the talent-level on defense?

Over the past decade, the draft has not been fruitful for the Bears. Swings and misses greatly outweigh hits from both the Jerry Angelo-era and the beginning of the Emery-era. As such, the Bears have been forced to turn to more expensive methods - free agency and the trade market - to fill roster voids.

The 2014 roster will be no exception. Eight of the Bears top-ten cap hits have come via free agency and trade, with linebacker Lance Briggs and running back Matt Forte being the exceptions.

Emery used a metaphor to describe the mechanics of the salary cap, saying: "It's like an apple pie that you have to slice up 53 different ways."

Here's an infographic to help illustrate who's getting the biggest pieces of the $126.3M pie (click on the image to enlarge): 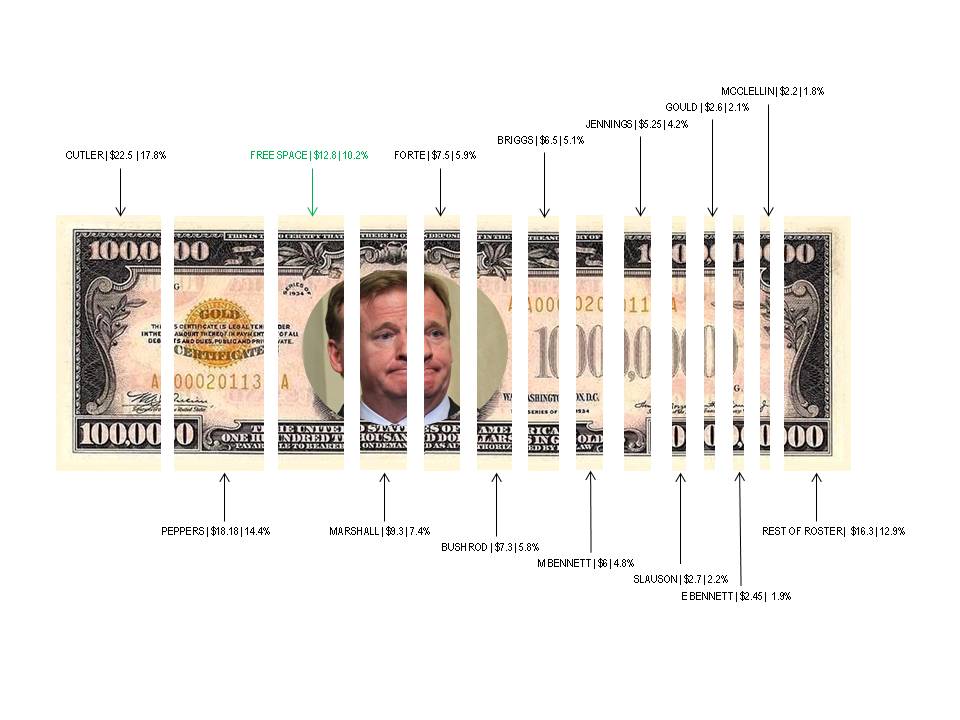 As you see, 32 percent of the pie is going to two players: Cutler and defensive end Julius Peppers.

Obviously, Cutler's going nowhere. Emery didn't get specific at the press conference when the Cutler deal was announced, but did say that the deal "worked for both sides," and he was right.

Cutler's deal contains no signing bonus. His salaries are guaranteed for the first three years of the deal and after year three, it is a year-to-year proposition. By structuring the deal in this fashion, the Bears retain the option of converting a specified portion of Cutler's salary into a signing bonus, which can then be prorated on a straight-line basis for a maximum of five years.

While the draft remains the ideal route to add young, cheap labor at a fixed-price for four seasons, the Bears have to make moves in free agency. Despite spending $33 million on their own players, they have enough room to be active.

Emery's first two draft classes have yet to produce an impact player on defense, so adding a defensive playmaker or two would provide more margin for error in draft. Either way, Emery must do a better job scouting and identifying defensive talent at the collegiate level.

In terms of structure, the Bears can mirror free-agent deals similarly to those extended to Jermon Bushrod and Martellus Bennett last year, veteran minimum salaries in year one that increase in value in subsequent years. In other words, cash over cap at the outset of the deals.

The salary cap is truly a fluid situation. Save for league-mandated deadlines requiring teams to be under the cap on specified calendar dates, cap space can be created if and when it is needed.

Here are a few examples.

By approaching Marshall about an extension, the Bears can spread out the old money - in Marshall's case his guaranteed $9.3M salary - along with new money over the period of his extension, ultimately reducing his cap charge for 2014 and securing his services for a longer term.

Releasing players. Traditional route whereby players are cut from the roster and their remaining guaranteed money - or "dead money" - is subtracted from the non-guaranteed portion of their cap charge, which can generate a cap savings.

The June 1 date comes into play in this scenario. To explain, players released on or after June 1 allows clubs to spread the remaining dead money over a two-year period, thereby freeing up 50% more cap space in the current year.

Furthermore, the league allows teams to designate two players as June 1 cuts prior to that date, which benefits both the team and player(s) for the upcoming free agency period.

The reality is that cap management hasn't been the issue for the Bears during their playoff drought, talent procurement has.

When he was hired, Emery said his goal was to win championships. Emphasis on plural. Considering the swiftness with which he rebuilt the offense last season, the same urgency and earnestness must be applied to the defense this offseason in order for that vow to materialize into a companion trophy. Otherwise, it will end up as another empty promise.