(CBS) After two weeks of training camp, the Bears released an unofficial depth chart ahead of Thursday's preseason opener against the Dolphins at Soldier Field. You can view it here or at the bottom of this article.

Here are my quick takeaways.

When I graded out the Bears position groups prior to training camp, I gave the defensive line the lowest grade, with a C-minus. The primary driver was the lack of proven talent, particularly at defensive end.

Looking at the first release of the depth chart, those same concerns remain, and the current defensive end rotation is troubling.

Jeremiah Ratliff remains the best defensive lineman on the roster and is currently listed atop the nose tackle depth chart. Undoubtedly, he will play both inside and out this season. But he has a chance to play more at defensive end -- think Justin Smith -- if Goldman is able to get his conditioning right.

With Goldman manning the nose in base, the Bears could kick Ratliff outside, then use Jenkins and/or Ferguson in a three-man rotation. While still not ideal, this would put the Bears in a better situation than they are currently.

Look for the team to scour the waiver wire for cuts at defensive end from now until the end of the preseason.

2) The battle between Willie Young and David Bass

Considering he was the team's best pass rusher just a season ago, it's odd to think Young is in a battle for a roster spot. Yet, that's exactly where he stands, sitting third behind Pernell McPhee and Sam Acho at the left outside linebacker position.

Not only is Young dealing with a scheme change, he's also recovering from a late-season Achilles' tear, which has kept his health at about 85 to 90 percent all camp.

In a 30-front, Young will be asked to drop into coverage and play the flats, which is something he's never done before. He doesn't play on special teams either, so he'll need a strong showing in the preseason.

On the other hand, Bass may benefit from the scheme change. He's a fluid athlete with great feet and an ideal frame for the position. In limited duty, he's made plays for the Bears and has an opportunity to force the Bears into a tough decision when final cuts come around.

Given how timid Brock Vereen was at times as a center-field free safety last year, it's somewhat of a surprise to see the staff working him in as the first-team strong safety.

Perhaps his past as a slot corner in college is what's attracting the new staff. At strong safety, Vereen will be called upon to match up with tight ends, which is an area where the Bears struggled last season. Where Vereen's timid play can be exploited is when he drops into the box as a run defender. Can he hold up as a force or alley player and be an enforcer against the run?

Currently, the Bears have last year's starting strong safety Ryan Mundy listed as the second-team free safety behind Antrel Rolle. Mundy has his limitations in coverage, but he's been a strong and reliable tackler. It will be interesting to see if he remains at free safety after a few preseason games or is moved into the mix at strong safety.

Much like the defensive line, the Bears have a depth issue on their offensive line. They're a player short with their starting five, as Jordan Mills remains, at best, a replacement-level swing tackle.

Looking at the second team exposes the real issue within the group. Michael Ola was a valuable player last season who started at four different positions. Currently, he's listed as Mills' backup at right tackle.

Keep an eye on the competition at right tackle to see if the team sticks with Mills, gives Ola a legitimate shot or changes course and moves Kyle Long outside. Long remains listed as the starting right guard.

This will be another position that the team will closely monitor the waiver wire for cuts. Either way, it will be among the top priorities for 2016.

Despite having six players at the position, the Bears tight end position goes one player deep -- Martellus Bennett.

Dante Rosario is listed atop the H-back/move tight end position, but he struggled as a lead blocker last season. He's clearly the second-best option at the position, but it will be interesting to monitor whom the Bears deploy in their two-tight end sets.

Typically, coach John Fox has looked for a blocker as his second tight end, so will Bear Pascoe become that player? If so, this could become a personnel key that opponents hone in on, knowing when Pascoe -- or whoever -- enters the game in 12 and 22 personnel that the Bears are likely running the ball. 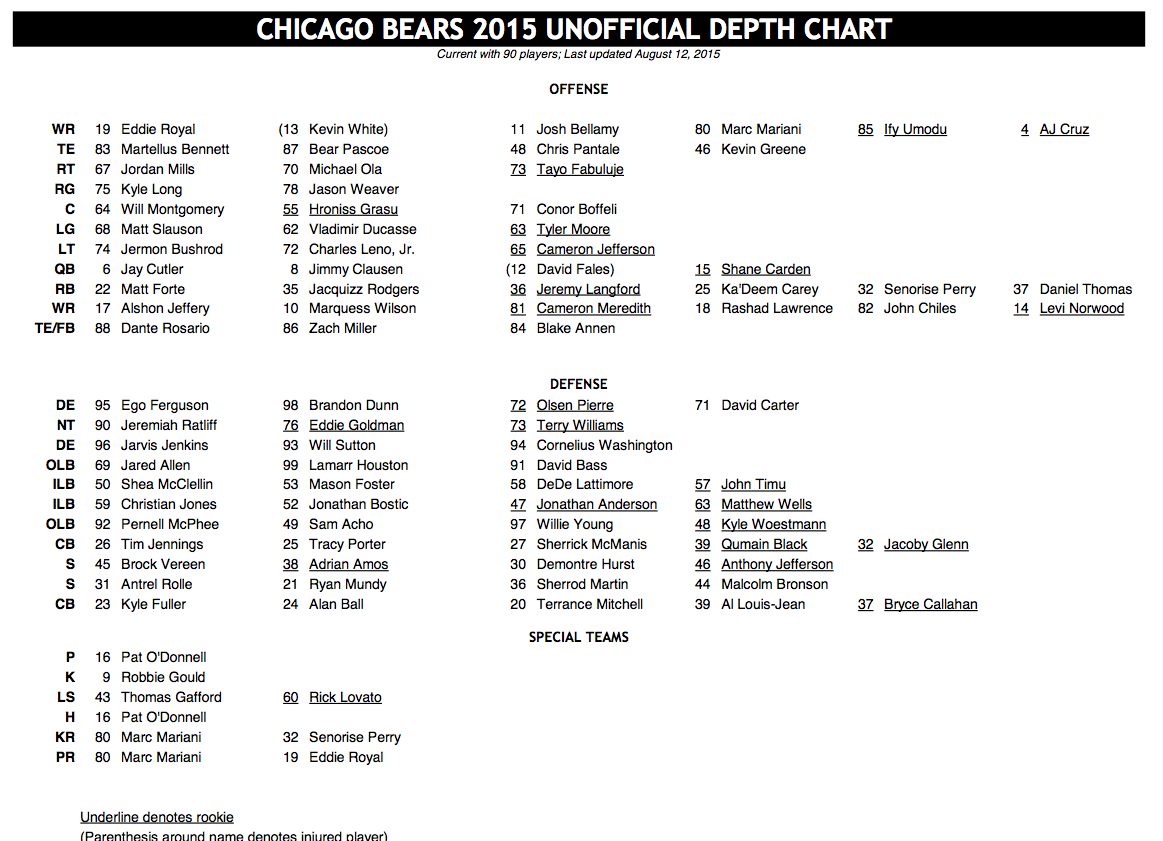