CHICAGO (CBS) -- Illinois state inspector Jose Guillen was caught on camera groping a female doggy daycare owner in Bucktown, and he was fired after our report on the incidents ran last month.

Since we broke the story, several other female business owners have come forward with similar complaints of sexual abuse during their inspections.

CBS 2 Investigator Megan Hickey asked what his bosses at the Illinois Department of Agriculture knew — and when.

The three women quoted in the next few paragraphs are complete strangers – now tied together by a single person.

"Why is he noticing me? This is a government employee. And in my head I started going, oh my God, did he touch me?" said Magda Szymczyk of the Gypsy Cats NFP Inc. Feline Sanctuary.

"He's a predator and it doesn't matter," said Bonnie Bloom of the Lucky Dog Pet Service. "You know, you go into this denial mode - 'No, that didn't happen.'"

"Then he starts putting his hand on my shoulder, on my arm, on my back. I didn't know what to do. I was just like, let it happen and be over," said Leah Bindig, owner of Aeslin Pup Hub and the subject of our first story on Guillen.

The similarities in the women's stories were striking, cringeworthy, and incomprehensible - because they're not talking about being a bad date. All of their businesses were being inspected by the Illinois Department of Agriculture when they went through these experiences.

About 70 cats and kittens across the Chicagoland area depend on Szymczyk at her feline sanctuary.

"Once you see that first little face looking at you, it's hard to look away for the rest," she said.

Her cat sanctuary relies on grant funds, which require a yearly inspection from the state's Agriculture Department. The only inspector working Cook County for that department until last month was Guillen.

Bloom relies on the same inspections at her Northwest Side doggy daycare. She said Guillen was "the only game in town," and she got to know him.

So does animal rescue owner "Kate."

"I knew it was wrong, but he had all the power," Kate said. "He controlled whether or not I got the license."

And then there's Bindig, the first business owner to come forward. Our investigation last month revealed surveillance video from her Bucktown doggy daycare, where Guillen was caught on camera repeatedly inspecting more than just her business in 2019.

He was seen touching her against her will – shoulders, back, rear end – and pressing himself up against her while holding the results of her inspection over her.

Days after we aired her story, Guillien was fired. The Department of Agriculture wouldn't say why.

Szymczyk's state inspection is the most recent among the women who have come forward to CBS 2. She said upon first meeting Guillen, he seemed "very nice" and "very personable."

Szymczyk: "And then he put his hand on the upper part of my back, and that when my head started saying, OK, did I move the wrong way? What's going on?"

Hickey: "That's when you started justifying in your head, what did I do wrong?"

Szymczyk knew immediately that something was wrong with Guillen, who she said repeatedly caressed her and made comments about her figure throughout her inspection in March.

"He shook my hand and pulled me in, and then the hand went from the middle of my back," Szymczyk said.

Bloom had encountered Guillen several times before. But it wasn't until her last inspection in 2019 that she says things crossed the line.

"I thought he was going to shake my hand... and he pulled me, he hugged me – and the next thing I knew, there was a hand on my butt," she said.

Kate agreed to speak anonymously because she's a retired Chicago Police officer who had a long career of investigating sex crimes. Her colleagues at CPD are currently investigating Guillen.

After three decades working with victims, she now identifies as one herself.

Kate: "He kissed me one time, and then sent me a text saying it was the sweetest kiss ever."

Hickey: "What's going through your head as he kisses you on the lips?"

Kate: "How dirty I feel. How could he do that? He's a state inspector."

Their experiences are nearly identical to Bindig's. But they didn't know there were others – until they saw the video of Guillen on CBS 2 doing the same thing to Bindig that they say he did to them.

"When he touched Leah and the hand went down, all the hair the back of on my neck stood up," said Szymczyk.

"Now this just brought it all up," added Kate. "Everything is out and it's like, 'Oh wow.'"

And they weren't the only women who came forward to us with complaints – just the ones who were willing to talk about their experiences on TV.

One dog rescue owner said she was groped during an inspection in 2014 – the year Guillen started on the job.

We've tried unsuccessfully to get Guillen's side of the story. But the address listed in court records where he was served federal court papers just weeks ago doesn't even appear to be occupied anymore. There was no furniture in the house when Hickey stopped by and knocked on the door.

And even though Guillen out of job, the women we spoke with now all have the same question for the Illinois Department of Agriculture.

Hickey: "That's what you want to know."

Bloom: "Yeah, because if he's been doing it this long, somebody had to call them."

And according to an email we obtained dated May 10, the Deputy General Counsel for the state Department of Agriculture knew about the police reports and the "very serious and concerning descriptions of Department employee behavior." 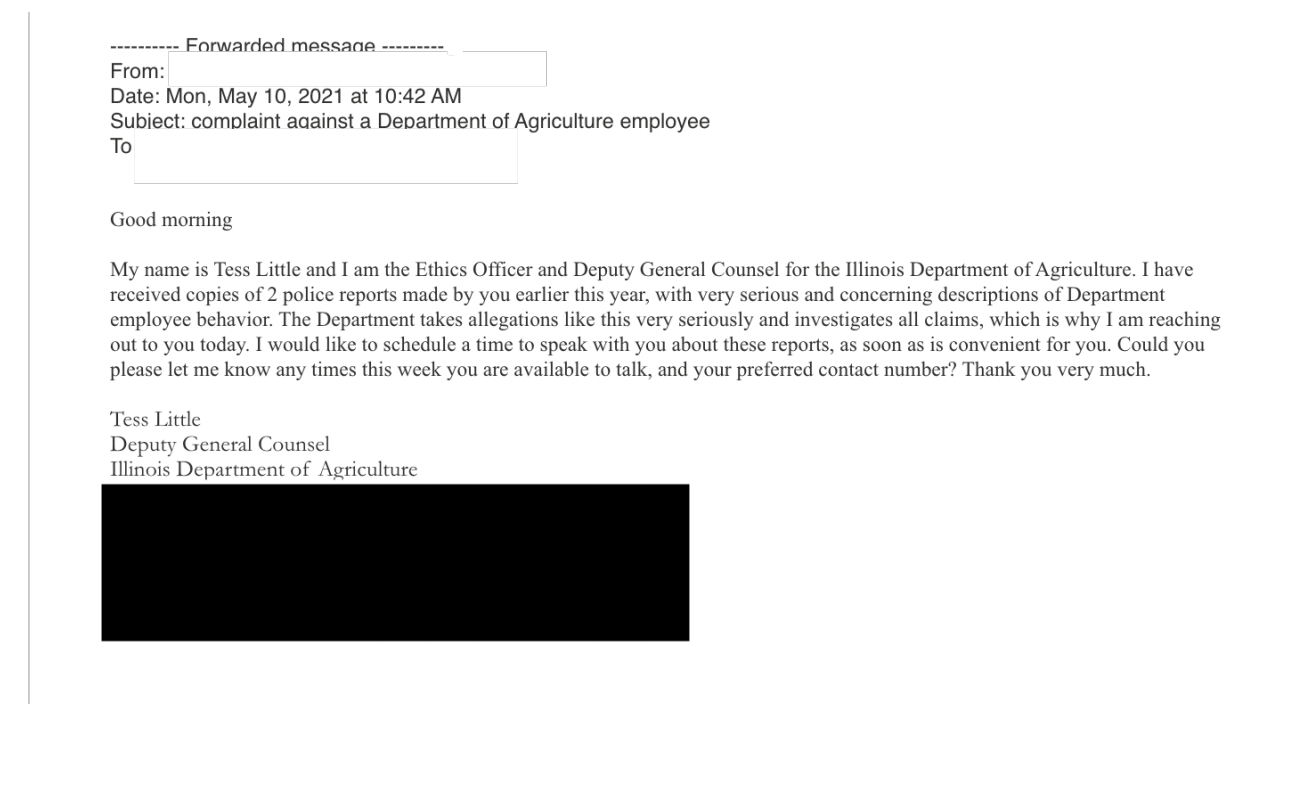 Still, Guillen remained on the street – and visited Szymczyk twice after that email was sent.

"I walked over here to turn her off, and he came up behind me again, leaning he same way," Szymczyk said, "not full body, but half of his body against half of mine, and leaning over."

She said Guillen even started showing up unannounced to "check in" at her home, after she had already passed the inspection. That is an act that other women have reported to Hickey as well.

"I'm here by myself," Szymczyk said. "I'm a single woman, and I'm not comfortable with him just turning up here."

Szymczyk called the Department of Agriculture. An employee replied with a voicemail – essentially saying everything was fine.

"Inspectors can inspect at any time that they want to," the employee said in the voicemail. "They do not have to have an appointment."

Why wasn't Guillen placed on administrative duty the moment that the department was made aware of the complaints? Why was he allowed to continue inspecting businesses – many of them in women's homes – alone?

Hickey asked the Department of Agriculture those questions. Late Wednesday, the department released this statement – which addressed only Bindig's case and not any of Guillen's interactions with other women:

"After learning about the allegations, the Illinois Department of Agriculture took action and prevented the employee in question from contacting the business owner. The department continues to work closely with the Chicago Police Department."

The women who spoke to Hickey said they have not gotten any answers from the department.

This case is far from over. There is still the looming question of criminal charges.

But in the meantime, these business owners, who work hard for the animals they love and protect, said they are done living in shame and fear.

"Because there should be justice in this case," Bloom said. "Something, something needs to be done."

"Do I have to show that in order to 'pass' and run my business that I've worked so hard for?" said Bindig.

"Enough is enough," added Szymczyk. "I shouldn't have to do this to prosper in my business."

Chicago Police told us they are still actively investigating the criminal complaints against Guillen. Other victims have now filed additional reports with the department.