CHICAGO (CBS) — It was Christmas Eve, 2019, when Jaylin Stiger and his brother would experience the most traumatic moments of their lives.

"It was right before Christmas," remembered Jaylin, who was 16 at the time and a junior at Sullivan High School. "So, you know, everybody was happy."

MORE: Data obtained by the CBS 2 Investigators sheds new light on Chicago Police officers' use of firearms, and shows for the first time just how often officers point guns at people without firing.

As he stepped out of his family's Rogers Park apartment, he didn't know he'd soon be stopped by Chicago Police officers four times, and handcuffed twice, in the span of 20 minutes.

He also didn't know around that same time, officers in the area were responding to a 911 call about a group of "Black males" who were "up to no good," according to dispatch audio, and that they would target him and his younger brother, who were innocent.

Nearly two years later, the Civilian Office of Police Accountability (COPA) have released some police body camera video showing what happened. CBS 2 used that video, dispatch audio and interviews with the family to piece together a chaotic and traumatic night – one filled with failures and disorganization by the officers involved.

The series of events reveal another example of aggressive policing by the department, similar to the types of incidents that sparked a federal consent decree mandating reforms.

"I very easily could have been killed that night," Jaylin said.

Police records documenting the incident said officers handcuffed and later released Jaylin when they realized he wasn't the suspect they were looking for. But those records leave out key details and information about what he and his younger brother experienced that night. Hours of body camera video also raise questions about how the family was treated.

Some of the videos from the scene begin in an alley near the Loyola Red Line stop. Multiple officers can be seen running, and dispatch audio at around 7:31 p.m. suggests it's in response to a call about three "Black males" who were "up to no good" in a nearby parking garage.

It's unclear what happened immediately after the call came in. But about 10 minutes later, an officer on the scene reports there are now six people running.

Meanwhile, just as Jaylin was leaving his home about one block north, an officer is seen tackling him to the ground. In an interview, Jaylin said he was so afraid police would shoot him that he didn't move.

"I was always taught to always respect them, like never run, never talk back, never do these things to the police," he said. "But that was because of what they do to people like me…well, Black teenagers."

An officer then handcuffs Jaylin. He's surrounded by officers, and they ask him how he got into the apartment.

At one point, while Jaylin is still handcuffed, one of the officers takes Jaylin's keys from his pocket and goes inside the apartment building.

The officer then uses the keys to unlock and open the door to the family's unit. That's where they briefly encounter Jaylin's 13-year-old brother, Lazerick. Officers quickly leave once they realize Jaylin was telling the truth about living there.

"We apologize man, just bad timing, you know," one officer tells Jaylin, laughing, as the teen is pulled from the ground and uncuffed.

The officer also tells the 16-year-old Jaylin they detained him because he shared a "similar description" as the suspects from earlier that night. Between the body camera video and the dispatch audio, the only description that can be heard is Black male suspects.

"So, when you walked out, it was wrong place, wrong time. Alright?" the officer says, apologizing to Jaylin.

It would take what appeared to be only minutes after that apology for Jaylin to stopped by police again. This time, it was at the Loyola Red Line stop, one block away from his home, the video shows.

But it's unclear what the officer said to Jaylin during that encounter, or why police stopped him again. The clip is less than two minutes long and has no audio due to a lag in Axon body camera technology. There are other portions of that video, and additional clips, that have not been released by COPA. The agency said they only released video that included Jaylin, whose family filed a complaint after the incident.

However, it appears police let Jaylin go a second time without an issue.

Meanwhile, back at Jaylin's apartment, there's more confusion – this time, with a different team of officers inside the apartment complex. It's unclear why they're waiting at the backdoor of Jaylin's unit or whether the earlier officers failed to communicate they'd already stopped him. CPD declined to answer questions for this story, citing a pending COPA investigation into the incident.

"What are these guys wanted for?" one officer asks in the video.

A few minutes later, Jaylin is returning to his unit through the back door, and officers stop him a third time. He tries to tell them he's already been stopped and cleared by police earlier.

"I just talked to police out in the front," Jaylin says.

"We weren't there so let us double check alright?" an officer says.

"I was in the front…and they just grabbed me," Jaylin said, later adding, "Does it look like I get in trouble?" 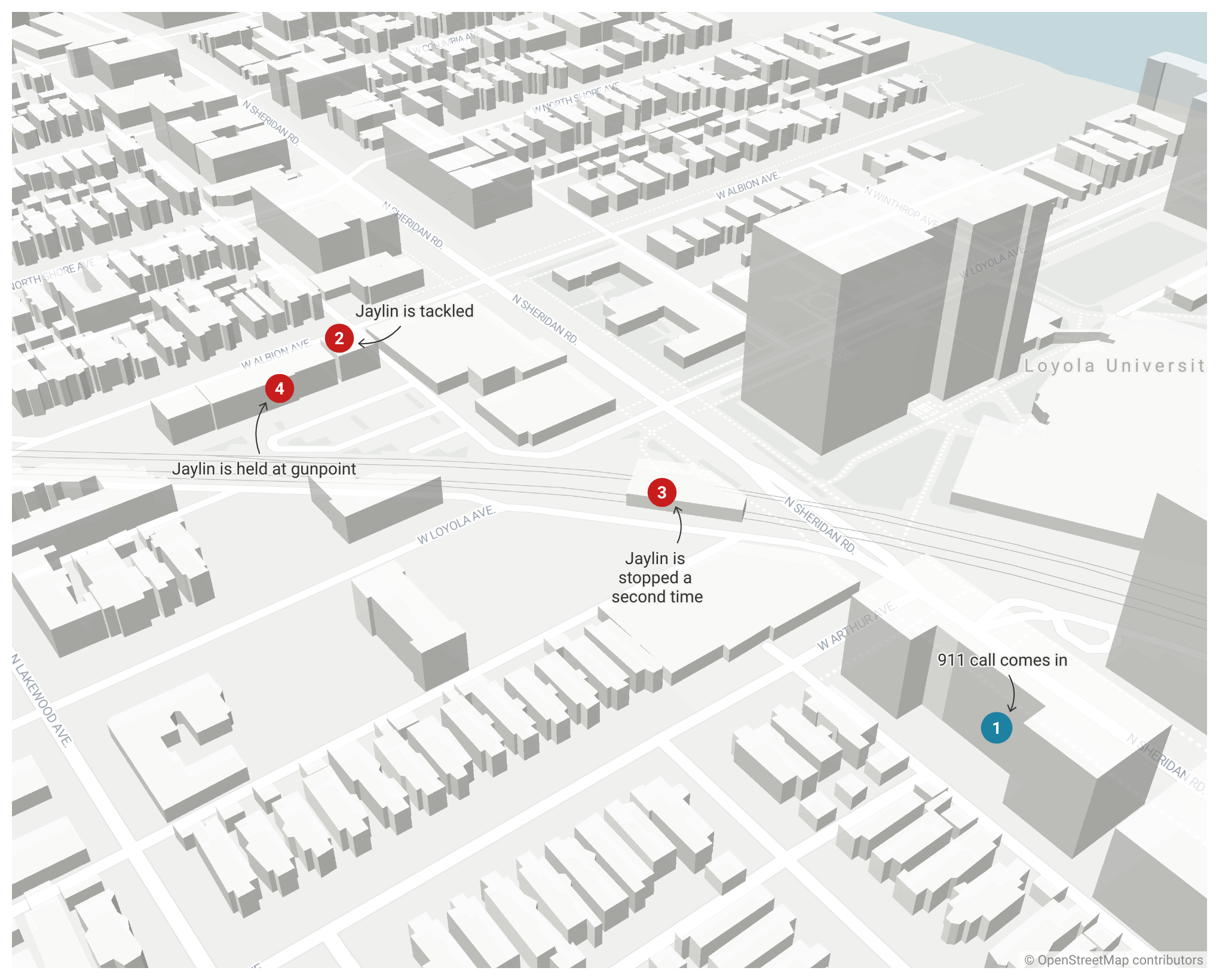 Minutes later, the officers leave the building and Jaylin goes back inside his apartment. A few seconds after he returns, a different group of officers are banging on his front door – his fourth encounter with police.

"Listen, at some point this door is going to be broken up, and you will be dragged out," one officer says. "You want to do it now or later? Open this door."

Moments later, Jaylin opens the door and sees multiple officers – one with a gun raised at him.

"Let me see your hands! Get down on the ground, on your knees," the officer yells.

"Oh my God, why are y'all messing with us like this?" Jaylin asks. "I just did this three different times…please go to the back," he continues. "I just talked to the police officers in the back. Don't do this again!"

The teens feared what would happened next.

"It happened so fast," Jaylin said, looking back on the incident. "I just remember opening the door and being in handcuffs on the ground in the hallway."

As officers forced him to the ground and handcuffed him again, Jaylin said all he could worry about was his 13-year-old brother Lazerick, who was inside.

"At that point they're jeopardizing not only my safety and my life, but my little brother's," Jaylin said.  "I was having a lot of emotions...what did I do for this to happen?"

In the video, he can even be heard telling officers, "Stop! Please, my little brother is in there."

Lazerick heard what was happening from inside the apartment and immediately called his mother, Quarnita.

"Honestly, I was scared because anything can happen at that moment," Lazerick told CBS 2.

"Lazerick called me and was like, mom, the police are here...like the only thing I heard was commotion in the background," Quarnita said. "The drive seemed like forever. I couldn't get there quick enough. You know, nervous, scared, hoping, praying like, please don't let my boys get hurt."

But inside the home, the video shows, an officer points a gun at Lazerick too. While he's on the phone with his mom, police then handcuff him.

But officers didn't stop there. Jaylin said he was "disgusted" by what police said to him and his brother while inside the apartment. When Jaylin repeatedly asks police to check with the earlier officers, one replies, "Don't bitch."

Another officer says, "You are getting coal for Christmas."

The video shows after a few minutes inside the home, the officers receive an order over police radio to leave.

"It's complete 'Keystone Cops'," said the family's attorney, Al Hofeld, Jr. "I mean, it would be just funny if it wasn't so sad that these two kids had to endure this. I mean, they're now traumatized."

Hofeld said the incident reflects a deeper problem with the department.

"I think it's a way of policing that's, you know, dehumanizing and frankly racist," he said.

Quarnita said she wants to know why officers, who had a vague description to go off of, felt justified to stop her sons in the first place.

"You shouldn't look at my boys and say just because of the color of their skin that they're not valuable or they're doing something illegal."

CPD would not say whether any of the officers involved have been disciplined. In a statement, COPA said its investigation into the incident is ongoing and "nearing completion."

Jaylin said his trust in police has been marred by what happened that night.

"For a long time, it was really hard to go by police officers, have conversations with police officers," he said. "It was a lot of anxiety or, should I say, overwhelmingness of that moment."

"Someone needs to be held accountable," Quarnita added. "I guarantee you if it was two Caucasian kids walking down the street, the situation would have been totally different. But my sons are African Americans. It's just a free for all."

What happened to Jaylin and his family was documented by CPD as an "investigatory stop." It's part of a pattern of cases that CBS 2 found raised questions about how Black and Brown Chicago residents are treated by police. You can read that full investigation, Left in the Dark, here.