CHICAGO (CBS) -- An Illinois man and woman were charged Tuesday with taking part in the riot at the U.S. Capitol on Jan. 6.

David Wiersma and Dawn Frankowski were named in a federal complaint filed in U.S. District Court in the District of Columbia.

Prosecutors said on Jan. 12, six days after the riot, a colleague of Wiersma's submitted an online tip to the FBI National Threat Operations Center. The witness said they had worked with Wiersma at PCI Energy Center in Lake Bluff for about 10 to 15 years, prosecutors said.

The Facebook post says in part, "We went to the rally and were lucky enough to get within 20 rows of the stage. From there we marched to the Capitol where we joined the protest inside. From what we know and experienced two people were shot one fatally. Many were tear gassed. We only experienced a little of that. Spent about 30 minutes inside and got out before the swat team went in."

As seen in the screen grab, when someone asked for an explanation of what happened at the Capitol, a comment apparently made by Wiersma says in part: "It was staged by ANTIFA, BLM and Capitol police. The police moved barricades and encouraged people to go in. There are videos and I spoke with people. By the time we got there it was like going to the shopping mall. People talking and with police just coming and going. If I had thought anytime we were in danger we would have left."

An anonymous tipster also flagged a third Facebook account with Wiersma's name on it, which showed a Facebook Live video depicting a man wearing a red and blue baseball cap with an American-flag-style scarf around his neck, prosecutors said. That man is believed to be Wiersma, prosecutors said. 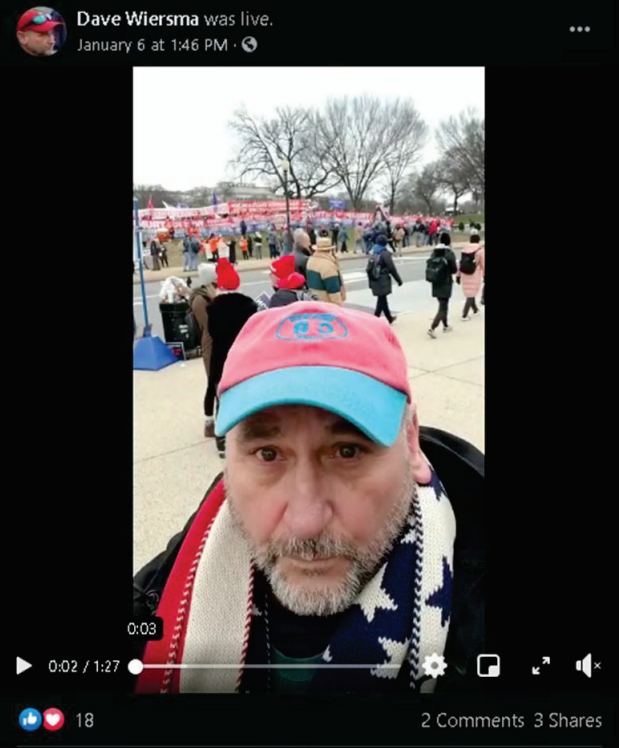 Live video also shows Wiersma inside the Capitol – including an area identified by Capitol Police as the Senate wise room on the first floor, prosecutors said. 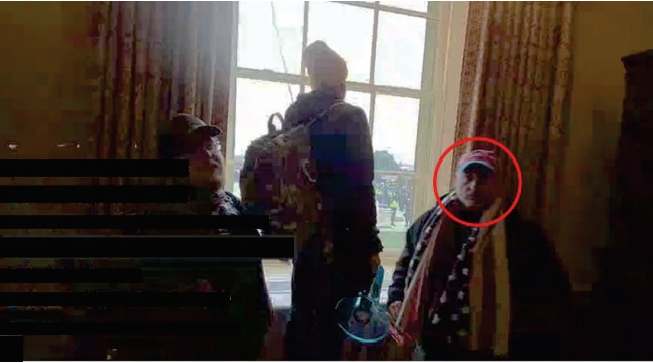 On April 12, a search warrant was authorized and agents interviewed Wiersma at his Illinois home, prosecutors said. He admitted to attending the Jan. 6 protest in Washington, D.C., but refused to provide information about the social media posts without an attorney present, prosecutors said.

Meanwhile, agents also noticed a woman who appeared inside the Capitol with Wiersma in one of the incidents. She was tagged on Facebook as "Dawn Maga," and was believed to have accompanied Wiersma to Washington, D.C., prosecutors said.

Agents reviewed Wiersma's cellphone records to determine that "Dawn Maga" was Dawn Frankowski, who had an address in Naperville, prosecutors said. Agents interviewed Frankowski at her home, and she admitted to traveling to Washington, D.C. to support President Donald Trump, but not to disrupt the election, prosecutors said.

Frankowski said she entered the Capitol with Wiersma and believed they were inside for about half an hour and entered two rooms, prosecutors said.

A court document indicated that Wiersma was arrested in south suburban Posen on Tuesday. An arrest warrant for Frankowski was attached to the criminal complaint.

Charges included entering and remaining in a restricted building and disorderly conduct.

The U.S. Department of Justice has now identified and charged 16 people from Illinois with participating in the Jan. 6 insurrection at the Capitol.