EVANSTON, Ill. (CBS)-- A construction company said Tuesday that their mistakes caused their equipment to strike the same natural gas main twice within a few days in Evanston, and they are now working to improve their practices.

As CBS 2's Tim McNicholas reported, a rupture on Monday shot vapor into the air and caused six homes to evacuate.

It happened near Elmwood Avenue and South Boulevard. 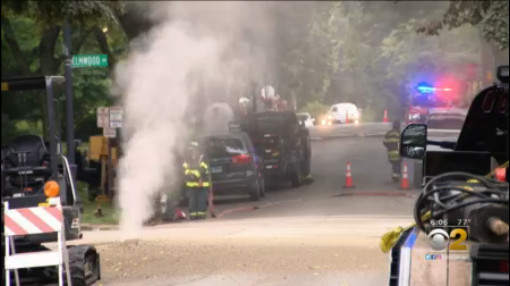 Dan Cauthorn said he was on his way home from work Monday when he saw the commotion.

"We see this crazy, people running around and we smell gas in the air," Cauthorn said.

Cauthorn's family lives right next to the site of the rupture. They decided to stay in a hotel Monday night.

The construction company Ledcor said they've been digging in the area to install fiber-optic cable for Verizon.

Over the phone, Ledcor spokesperson David Hoff told CBS 2 that Ledcor workers did not set up their equipment right and the equipment was not properly calibrated, causing it to strike the pipe Monday.

Hoff said a similar error caused them to strike the same pipe on Friday. Firefighters said no one had to evacuate for that.

After the Friday incident, Ledcor had a meeting to discuss what went wrong and the workers thought they'd avoid a repeat problem with their new plan. But they struck the same pipe again Monday, Hoff said.

"The second time was not okay," Cauthorn said. "Because we couldn't come back (home.)"

Nicor Gas repaired the pipe and Hoff said Ledcor workers eventually were able to bore in the spot and avoid the pipe.

"We are looking to change our procedures," Hoff said.

Exactly how the procedures will change will be determined in the days ahead, Hoff said.

Ledcor crews look at maps showing the underground utilities for their jobs, according to Hoff. The spokesperson said the map was accurate in that spot.

"We made a mistake and we hit it," Hoff said.