CHICAGO (CBS) -- The Chicago Police department has finally acknowledged that it had purchased cell-phone interceptor devices back in 2008, raising serious privacy concerns among activists who question how they are being used.

The devices, known as IMSI Catchers and sold commercially under names like Stingray, mimic a cell phone tower and connect to mobile devices without the user's knowledge.

The existence of the eavesdropping device, which is basically a small electronic box and a laptop, in Chicago was reported by CBS Chicago earlier this month. It can sweep up data on texts, calls, technical details and more.

A local privacy activist, Freddy Martinez, had filed a Freedom Of Information Act request with the CPD to provide evidence that the department had purchased the devices.

This summer, the CPD provided Martinez with two invoices and one quotation from 2008 and 2009, that showed the department purchased about $150,000 worth of Stingrays, and supporting technology, from Harris Corp.

"It's strongly suspected that the Chicago Police Department does monitor protesters and constitutionally protected activities," Martinez told CBS 2's Suzanne LeMignot. "They bought them. We don't know if they're using them, because they haven't told us, but what kind of violations are we talking about here." 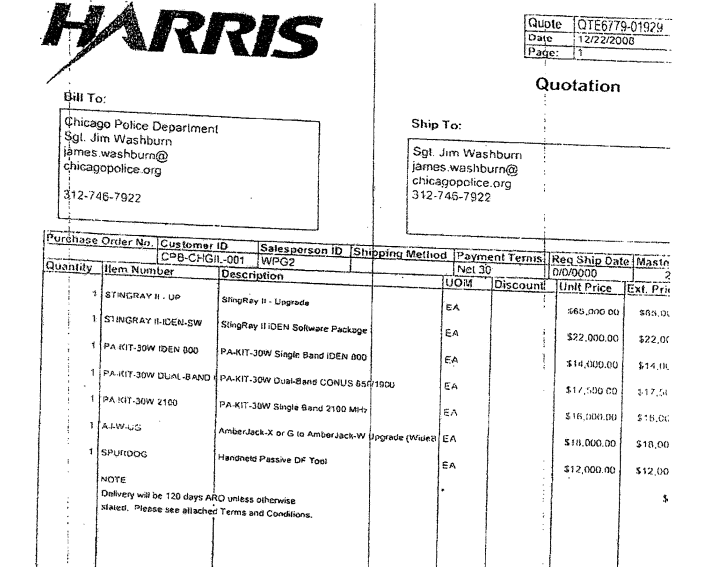 Ten months ago, the CBS 2 investigative unit asked whether CPD had such devices.

The department denied it, even though the purchase orders clearly indicate the devices were in the department's possession for several years.

Martinez has now filed a lawsuit against the department, demanding that CPD provide more information on how the devices are used.

"Many believe that Chicago Police have already deployed this kind of technology at protests," said Matt Topic of Loevy & Loevy Attorneys at Law, which represents Martinez in the suit. "Local police departments in other states have widely used the technology, and have kept it secret, even to the courts, and even when it has been used to obtain evidence in a criminal case."

In the past, law enforcement had to obtain a warrant before approaching phone companies to obtain cell phone records. The ACLU says the interceptor gathers information about the phones of bystanders who happen to be nearby a suspect.

"This equipment is used to trick cellular devices into providing it with data, including device identification numbers, numbers dialed by a device, and the location of a device," according to the lawsuit.

According to the Washington Post, the FBI requires state and local police to keep quiet about the capabilities of the surveillance gear, according to a bureau document released recently under a Freedom of Information Act request.

Chicago police say they can't comment on this story because of the pending litigation.