CHICAGO (CBS) -- Lots of clouds for Monday night with lows in the low 30s. A few sprinkles or light showers will be possible by sunrise Tuesday. Highs on Tuesday will be milder in the low 40s with scattered showers.

Rain will transition to snow on Tuesday evening. Areas of heavy snow will be likely late Tuesday night through Wednesday morning. The heaviest snow is expected for areas south and southeast of Chicago.

A WINTER STORM WARNING will be posted for Kankakee County & all of northwest Indiana from 10 p.m. Tuesday until 6 p.m. Thursday. According to CBS 2 Chief Meteorologist Albert Ramon, these areas could see 6 to 12 inches of snowfall, with isolated higher amounts possible.

A WINTER STORM WATCH will be posted for central & southern Cook county, Will, Grundy & LaSalle county from 8 p.m. Tuesday to 6 p.m. Thursday. Some locations may see or exceed 6 inches of snowfall in these areas.

Ramon reports the latest data as of 10 p.m. indicate a dusting at most to the northwest in McHenry County, and up to 4 inches in north suburban Cook County. Downtown Chicago and the city's South Side are more likely to see 4 to 6 inches, with pockets of up to 8 inches. This all goes for areas in a band that moves southwest into Will County and southern LaSalle County.

The heaviest snow, again, is expected in Kankakee County and northwest Indiana.

Partly cloudy and cold on Friday with highs in the low 20s. Mid to upper 20s this weekend with mostly sunny to partly cloudy skies.

Chicagoland is in the eye of another winter storm, which will start to take shape early Wednesday and last through Thursday. 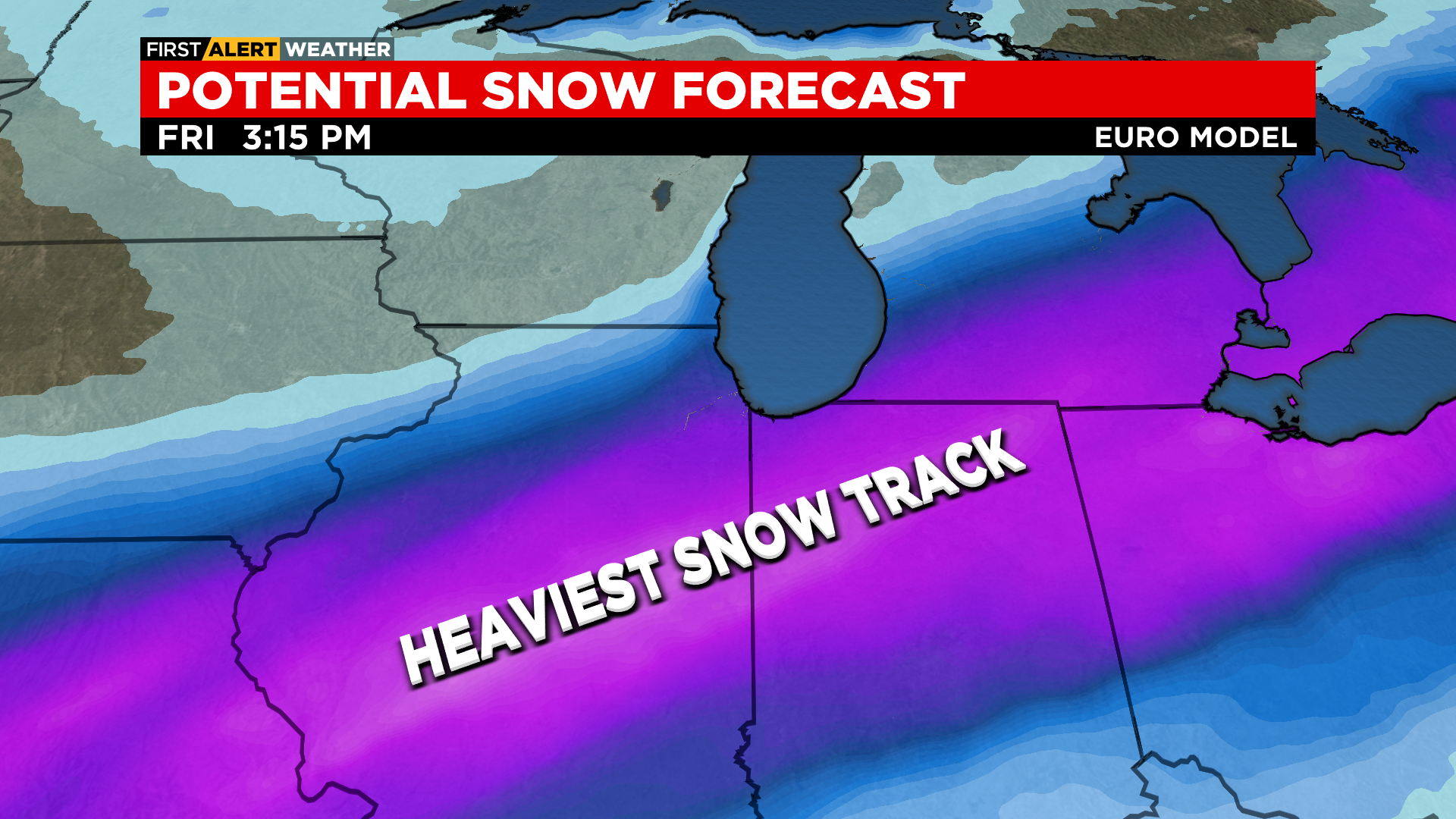 Monday will be a mostly sunny day with temperatures near 33 degrees. Tuesday will be a bit warmer, but then rain develops later in the day and turns to snow early Wednesday.

Models currently predict the heaviest snow will fall just south of Chicago, but the exact track of the storm is still unsettled. First Alert Weather models show most of the area is expected to see significant snow, anywhere from 6 to 12 inches, with some areas getting as much as 18 inches. However, it is still to early to predict precise snow amounts.

A Winter Storm Watch has been issued for Tuesday evening through Thursday evening. There is also a winter storm warning starting at 10 p.m. Tuesday and ending at 6 p.m. Thursday for Kankakee County in Illinois, and Lake and Porter counties in Indiana.

LaPorte County, Indiana will also be under a winter storm warning from 1 a.m. Wednesday to 7 p.m. Thursday. 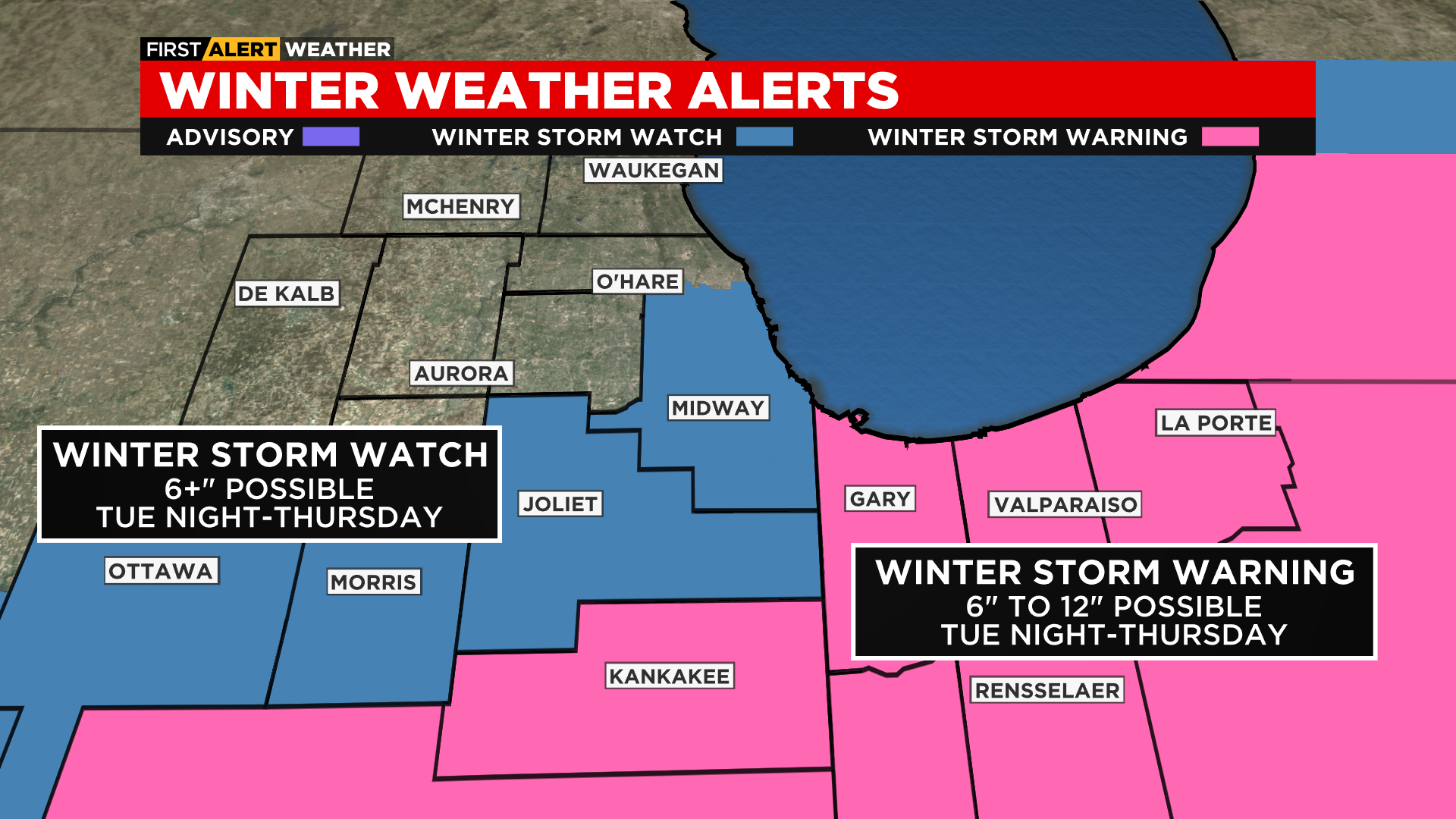 Currently all models show our south and east communities will get the heaviest snow, with lesser amounts north and west of the I-55. Any shift in the track could bury the city with more snow. 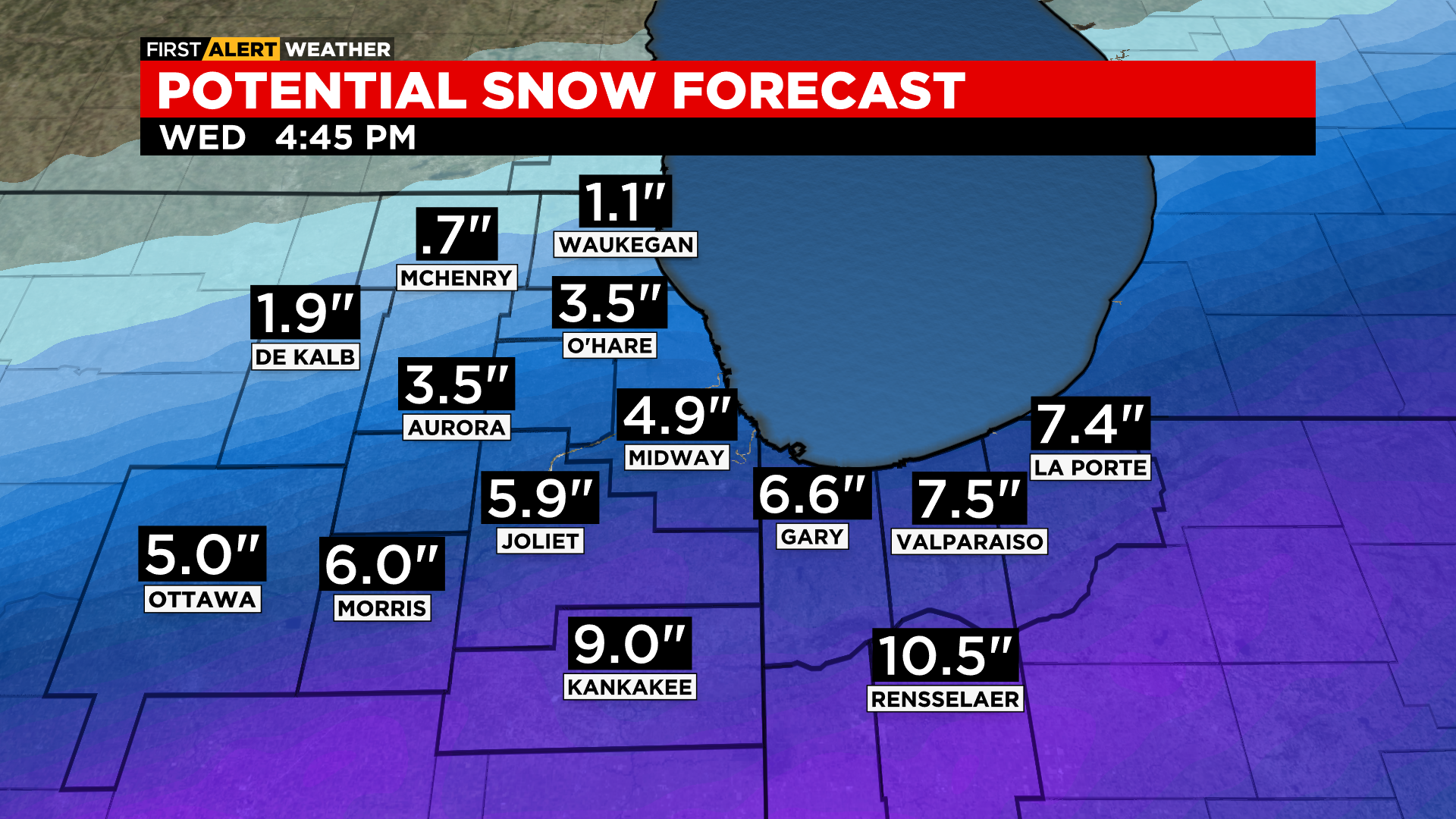 Two systems are expected to piggyback off each other. The first system will begin to develop Tuesday afternoon or evening with rain, before cold air arrives and winds shift from the southwest to the northwest, and temperatures tumble from the 40s to the 20s by late evening, and rain changes to snow overnight. 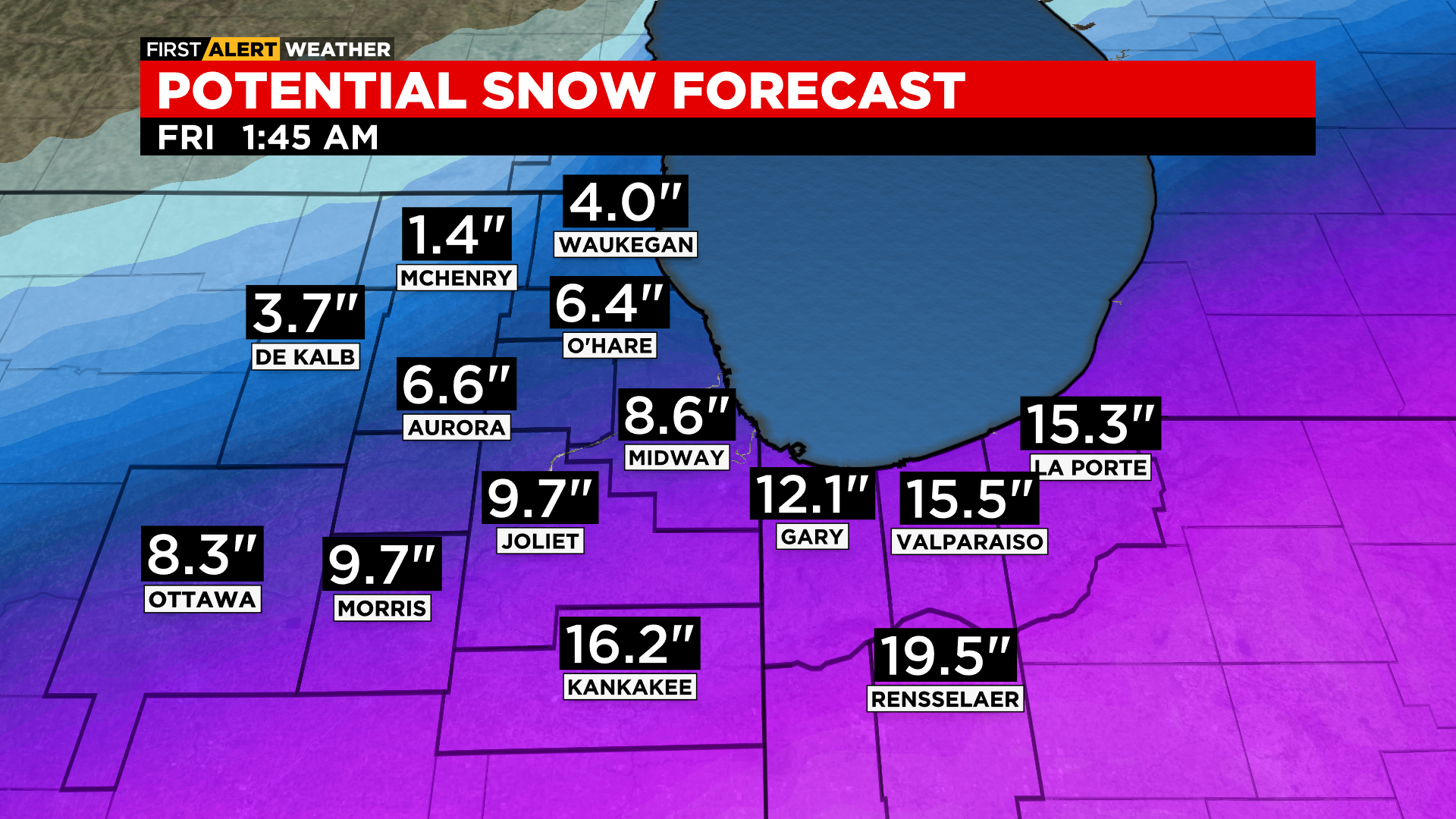 Snow will continue through the first half of Wednesday, before slowing in the afternoon. 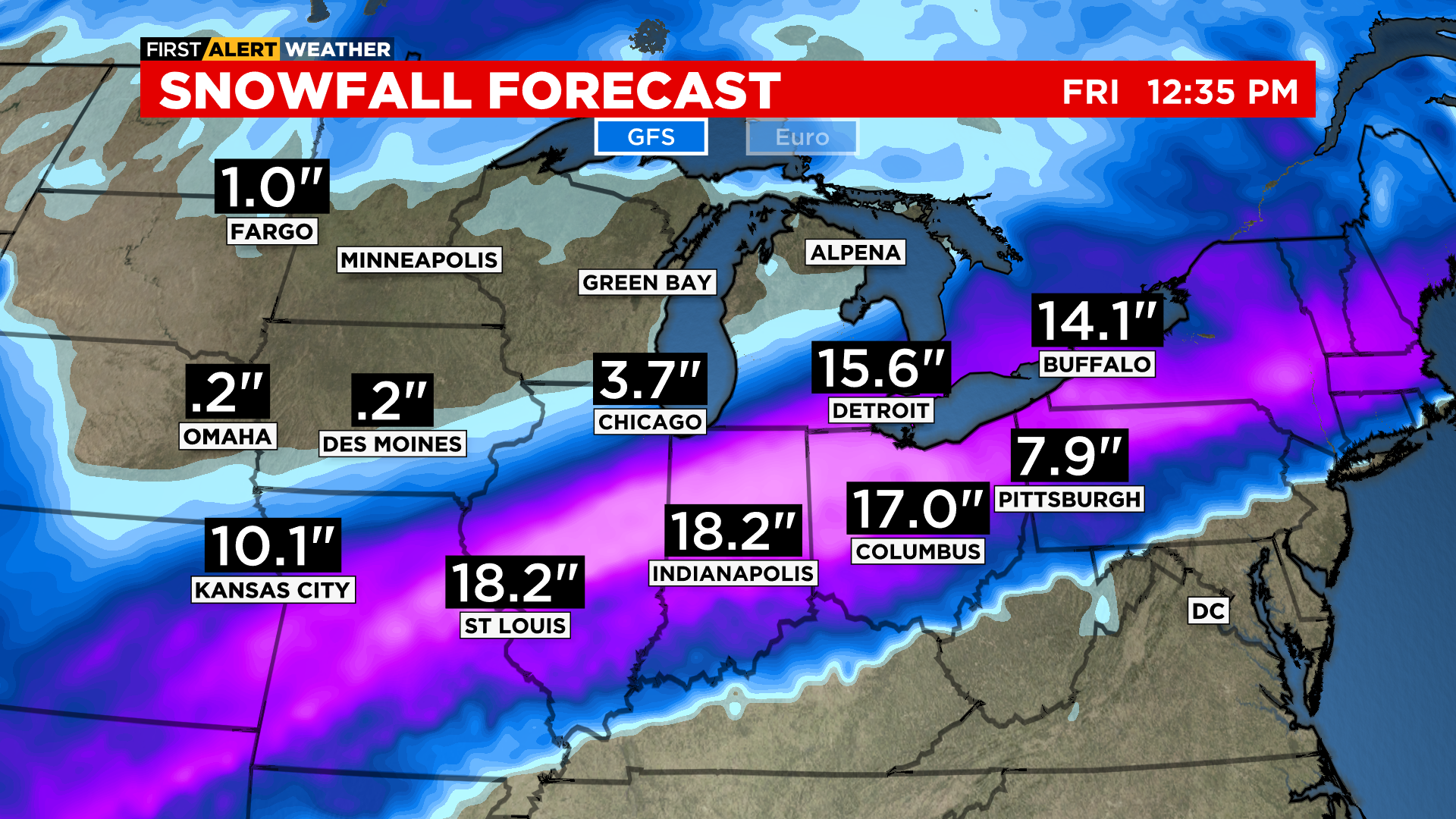 This would be the third Groundhog Day Storm in the past 11 years. Storms in 2011 and 2015 rank among the top five winter storms all times in Chicago.

WEDNESDAY: A 90% chance of snow. Some snow will be heavy, especially in the morning. High 27°. 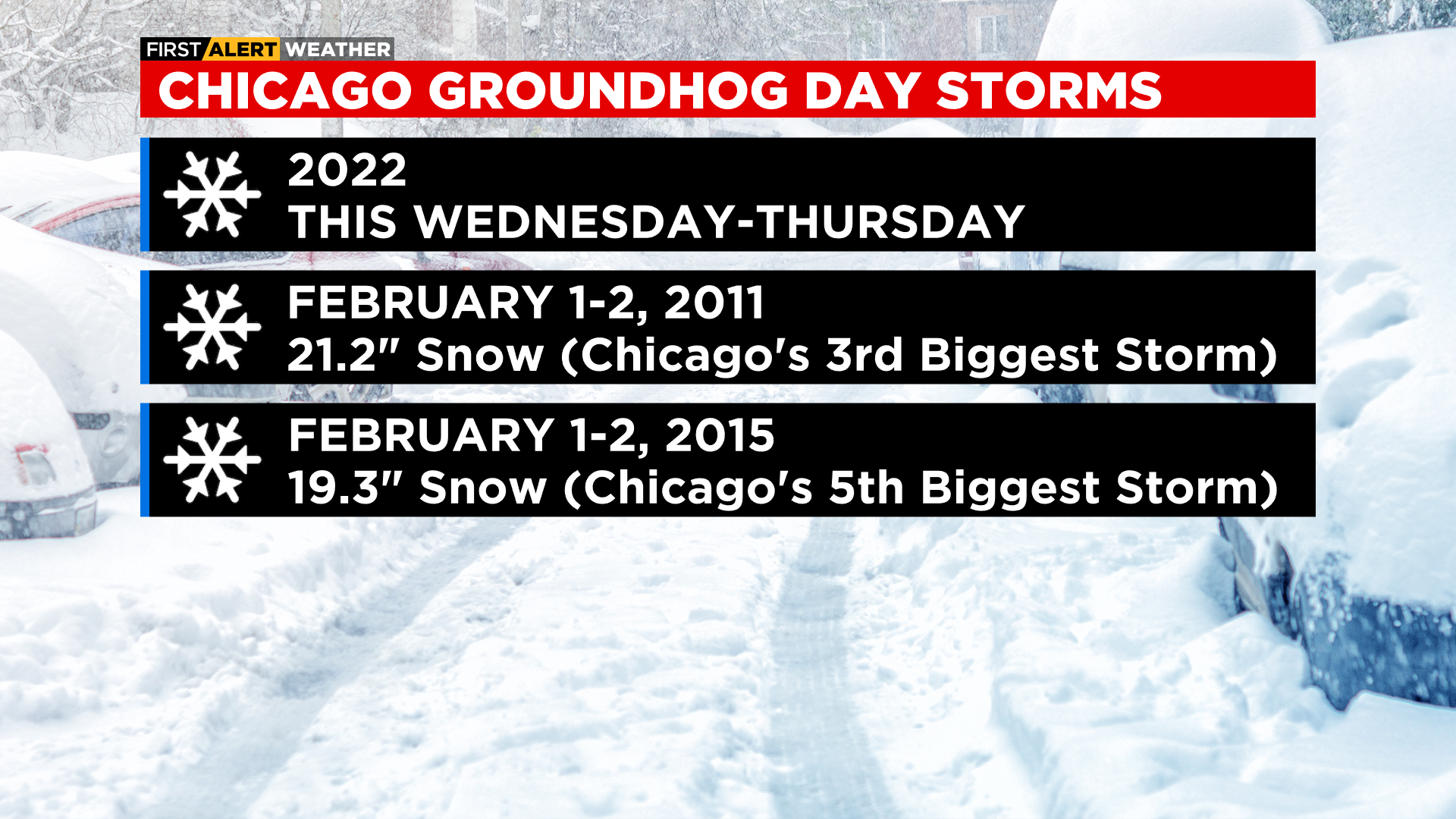