They don't have I-PASS transponders.

One of those people is Karen Ford, who recently had an airport pickup mix-up.

"I had to hurry up and get to O'Hare where I should have been," Ford said.

She was at the wrong airport, Midway, and searched for the fastest route to O'Hare International Airport.

"So I jumped on the tollway," she said.

It's been a minute since Ford has been on any toll road. So, when she wound up on the Tri-State Tollway, she found something she hadn't seen before. There was no longer any way to pay cash.

In the past, she said, "I would go up and have my money ready and either hand it to a person or throw it in a basket and keep going."

The Illinois toll system was created by law in 1953, and the first freeway was converted to a pay road in 1958. Cash has been a familiar way to pay the tolls for decades.

But, when the COVID-19 pandemic exploded in March 2020, toll collectors and coin catchers vanished in the name of safety. They haven't returned.

Instead, drivers without transponders have only one option. They are forced to go through I-PASS lanes.

"It just said, no keep going. You can pay online," said Robin Martin, who was also surprised by the change.

She recently moved back to Illinois and wasn't aware of the new rules of the road.

"There was nowhere to stop and pay the cash," she said.

There is nowhere along the Illinois Tollway. But at the privately-owned Chicago Skyway along the Indiana/Illinois state line, it's a different story. Workers there man the toll booths. Drivers can pay, in real time, with cash or credit. A toll booth worker wearing a mask and gloves as protection from the virus happily took our $5.80.

He said the Illinois Tollway's switch from paying in person to paying online has hit some speed bumps.

"I think the best of intentions here just put a lot of motorists in a tough spot if they're not used to that online payment system," he said.

The Illinois Tollway argues there are signs everywhere telling drivers to "Pay Online" and warning them they've got "14 Days To Pay Online."

We asked Karen Ford if she remembers seeing those signs. "Frankly no. I don't. I'm doing 55 and I really didn't deal with what it was saying," she said.

Robin Martin admits seeing the signs, but thought: "I realized they're gonna send a bill. It won't be long until I get a bill in the mail. So, I just waited on the bills."

It took about six weeks from their missed tolls for the bills to start arriving. When they came, Ford said: "I was frankly kind of pissed. It was like, really?"

What upset her was an unexpected charge on the bill, because there's no warning on the tollway signs that failure to pay in 14 days prompts pesky fees.

Ford received a bill where she missed three tolls and got three invoice fees. One missed toll was 60 cents with a $3 fee added. That fee is more than four times the original toll.

"It was $3 each one and that adds up. I'm thinking that's ridiculous," said Martin.

Martin and Ford aren't the only ones sounding off. We found a constant stream of complaints on the Tollway's Facebook page. Drivers are griping about not being able to pay in cash, the new online payment system, and those extra fees. 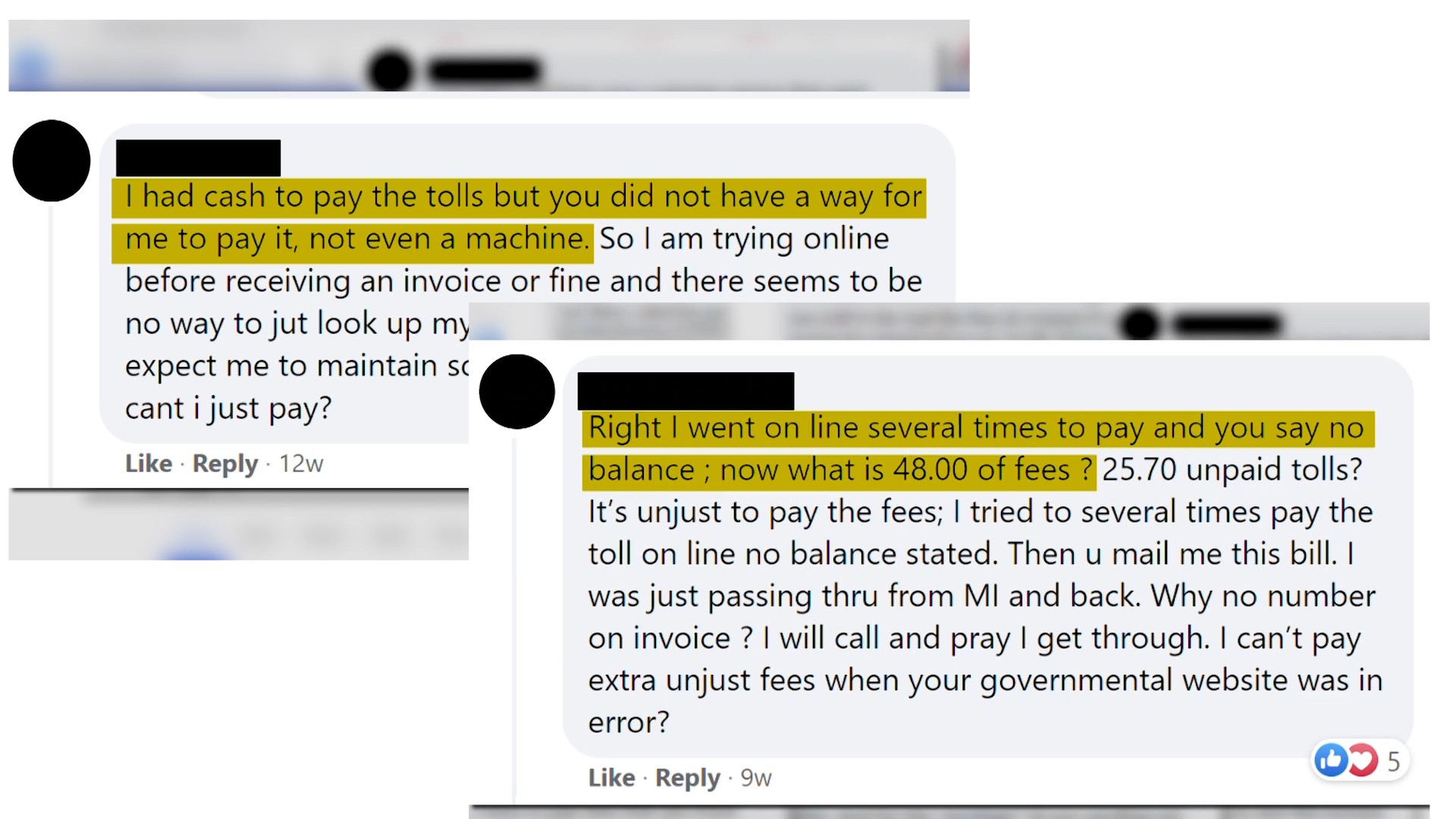 But it's even worse for Martin, who took 19 trips on various tollways over a six-month period.

Some bills she didn't understand, because they showed zeroes in the toll column.

She might have paid those tolls online after 14 days but before the invoice was mailed and therefore still got charged the fees.

"I mean, that's just overwhelming," she said. "Like who wants to pay all that?"

The CBS 2 Investigators found an alternative where drivers don't have to pay all that. It comes from the state Martin used to call home - Texas.

Here's how it works in the Lone Star State. The North Texas Tollway sends out a first invoice with no extra fee attached. If you don't pay that, then you get a second invoice with a flat $10 fee – an option Schwieterman supports.

"You wonder if there's some flat fee that could be added to a ticket, as opposed to just the $3 fee that goes up indefinitely," he said.

But there is no flat fee in Illinois. The Tollway here tacks on a $3 fee for every unpaid toll on the first bill sent to drivers.

So why can't Illinois do it the Texas way? We didn't a clear answer to that question. But what we discovered is there's little incentive for Illinois to change.

It comes down to money.

When cash was an option, the fine for not paying a toll was as low as $20 a pop for a passenger vehicle. When the cash option disappeared, those $20 fines got replaced by $3 fees - and the Illinois Tollway could boast it was looking out for drivers.

But according to records the CBS 2 Investigators obtained, the lower fees are not hurting the agency's bottom line. It charged drivers $409 million from June 2020 through October 2021. So far, drivers like Karen Ford have paid $86 million of those fees.

"I didn't miss a toll," she said. "I didn't have an alternative in the moment."

The agency confirms to CBS 2 the tollway is on track to take in as much money this year as it did in 2019 when the fines were much higher.

Karen Ford is going to look into the Pay-by-Plate system. Robin Martin eventually bought an I-Pass.

"I'm hoping that it's working and they're not incurring any fees," she said. "I don't want to wake up and see more bills."

We asked the Tollway if cash lanes would ever reopen. The answer was not definitive. So we'll keep watching to see if any changes are made to either invoicing procedures or cash collection.

A tollway spokesman a week ago told us, "There are no plans to resume cash toll collection at this time." Late Friday afternoon, he clarified that position, saying, "The Tollway's official position is that we have switched permanently to cashless tolling."