CHICAGO (CBS) – The Chicago teachers' strike will head into its third day on Wednesday, after the latest round of talks ended Tuesday night without a deal to bring teachers back to work, and the head of the Chicago Teachers Union describing their progress as "glacial."

Talks between Chicago Public Schools officials and the union ended around 8 p.m. Tuesday, after negotiators spent all day trying to hammer out an agreement on a new teacher evaluation system.

CBS 2's Dana Kozlov reports it was clear even before talks officially ended for the day that no deal was likely on Tuesday, and perhaps not even on Wednesday.

"We have been working hard on evaluations all day. There has not been as much movement as we would hope," Lewis said shortly before 6 p.m. Tuesday. "There's been – let's put it this way, centimeters, and we're still kilometers apart." 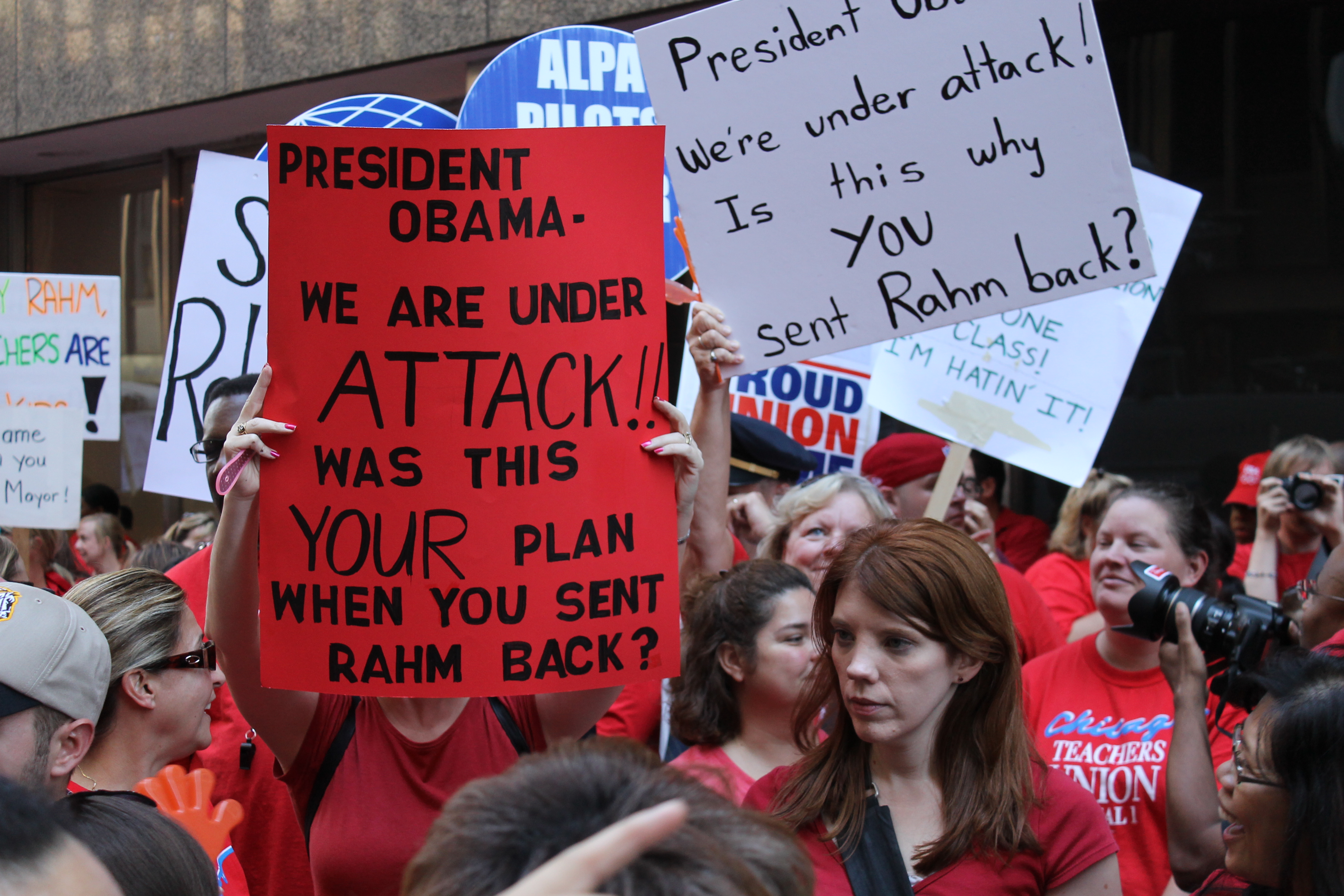 Lewis also said there hasn't been enough movement towards that goal to make her think an agreement could be completed on Wednesday. She said the union has only signed off on six of 49 articles within the contract. However, Chicago Board of Education President David Vitale claimed Tuesday night that there was agreement on more than just six issues, but the union was not officially signing off on those matters to make it appear publicly as if the two sides are further apart.

After talks ended for the night, Vitale said the district has presented an updated proposal to the union, in an effort to address their concerns on the teacher evaluation system, as well as other issues.

"I would not say that we came to agreement on the fundamentals of all of that, but there are proposals that they did give to us which are included in this comprehensive proposal, and there are changes in our own proposals that we've made to them," Vitale said.

Vitale said the district has also asked for a written response to their contract proposals, or a comprehensive counter-proposal from the union.

"When we receive a written response, or a written proposal, we will sit down and meet with them," Vitale said.

"We tried to move in the board's direction today. At the end of the day, though, they basically dug in their heels, and told us if we didn't give them a comprehensive proposal, that we didn't have anything further to talk about," he said. "So we kind of feel like they've given us an ultimatum, in a sense."

Sharkey said the union would try to put together a counter-proposal for the district as requested, "but we intend to continue working as hard as we can to get an agreement."

Asked if teachers could be back at work by the end of the week, Sharkey said, "We're doing our best."

Earlier Tuesday, Vitale had predicted a deal could be reached by the end of the day.

But, at a downtown rally attended by thousands of teachers and their supporters, Lewis said it was "lunacy" to think a deal could be reached that soon.

Teachers do not want the evaluation system to rely heavily on students' standardized test scores.

CTU teachers have been on strike since Monday, and have been negotiating with the Emanuel administration on a daily basis, with no deal in sight.

Tuesday afternoon, thousands of teachers and their supporters took to the streets downtown, demanding a fair contract. Some held posters that blamed President Barack Obama for the impasse.

"President Obama We Are Under Attack, Was This Your Plan When You Sent Rahm Back?" the posters said.

Mayor Rahm Emanuel was Obama's White House Chief of Staff before quitting to run for mayor.

"We did not start this fight," Lewis said to the cheering crowd as she stood on the back of a pickup truck parked on the street outside CPS Headquarters. "The assault on public education started here. It needs to end here."

That drew a rebuke from Vitale after contract talks ended for the night.

"I think many of you who may have known me over time know that I'm not a silly person," Vitale said. "I spent the entire day here today. It wasn't part of my day."

Vitale also took a shot at the teachers who marched through downtown, and to Buckingham Fountain in Grant Park, during Tuesday's teachers' rally.

"They were told to keep going, and to have a party, and have fun; have fun while 400,000 kids are out of school – that they should have been teaching," Vitale said. "This is not the behavior of a group of people that are serious about the interests of our children. It is time for us to get serious."

CBS 2's Mike Puccinelli reports, after the rally, the protesters then started marching through the Loop, winding their way along several different streets and -- at one point -- through Grant Park.

As the teachers marched downtown, Kara Boulahanis--a special education teacher at Matthew Gallistel Elementary Language Academy--said, "I believe that our special education students deserve a fair shake in this contract, and they're not getting one. My students are being tested more than 16 times a year, and that's just not appropriate. So I'm here standing with my brothers and sisters today to fight for my students."

Boulahanis said she is "very scared" about the strike, but feels she had to walk out to send a message to school administrators.

"This is my job, my career, my life, and obviously I'm worried about being able to pay my rent, but I believe in this strongly enough that I just can't not be here," she said. "We're standing up for all teachers, everywhere. My mom's a special education teacher. My aunt's a special education teacher. All over the country, people are calling me and saying 'Thank you. Thank you for standing up for workers, for the people, and for the kids.'"

Another stumbling block in contract negotiations appears to be guidelines for recalling teachers who have been laid off. CPS has offered to enter them in pools where they could be chosen to fill open positions. Those pools depend somewhat on why those teachers were displaced. But Lewis said that issue was not discussed during Tuesday's talks.

"The bottom line is when you look at the facts, what are they really fighting for? Name three things they're fighting for. They haven't clearly articulated that to the parents. We're part of the stakeholders in this too," said Lee Earle, the father of twin boys who attend CPS schools. "I spent $240 in child care the last two days. I'm not happy about that, and I'm sure most parents can't afford that. So if the teachers really care, show me how they're taking care of my children."

Emanuel, who has had a rocky relationship with the CTU during his short tenure as mayor, said the picketing is an unnecessary "strike of choice." He urged both sides to work out a deal and get teachers and kids back in classrooms.

CPS has opened 144 of its buildings during the strike for half-days so that students can occupy their time with activities and eat breakfast and lunch. Still, parents of Chicago school children have been left scrambling to find all-day supervision for their kids.

The teachers union and CPS have agreed on a number of issues, including salary and a longer school day.