Every Chicago neighborhood had its taverns where the working men and women would meet, down a boilermaker and a Slim Jim and head home with the scent of eau de Schlitz. However, change is good because these watering holes, which are updated versions of the classic American tavern, all specialize in the burgeoning world of craft beer.

The iconic American tavern arrived in the South Loop in June of 2012 in the form of City Tavern. The beverage program features 18 beers on tap and dozens of beers by the bottle with a special focus on American craft beers and local breweries. Sharlan Edmonds, General Manager of City Tavern explains, "I created the beer program revolving around everything City Tavern is about -- a place to gather and enjoy great food and drink that is unique, timeless, tavernesque and quality driven. In today's world of amazing craft beers, I've created a list that appeals to anyone who enjoys beer of any style." Your dad might not recognize these updated classic tavern recipes like steak and ale pie with carrots and red wine sauce; duck fat fried potato chips with garlic and herbs; and a grilled cheese - this one oozing with ricotta, burrata and fontina on focaccia with white truffle oil. When you need something stronger, know that rum is also a principle part of the adult beverage list with 17 different varietals from Jamaica, Martinique, Louisiana and Haiti, among others.

You'll have to check Small Bar Division's beer list online because it's updated almost as often as a teenage girl's Facebook status and it's a lot more interesting. Last count was 23 beers on tap, 98 bottled beers and 17 variations of canned beer. Small Bar is no recent addition to the biermeister status as it has been a leader in the craft beer drinking scene in Chicago since 2004 and has twice been named one the best Beer Bars in America by Draft Magazine. You know this Ukrainian Village spot takes beer seriously when not only the owner/beer buyer is Cicerone Certified but 85 percent of the staff are Cicerone Certified beer servers. Owner Phil McFarland says, "We are always looking for a new thing to offer guests whether that's a new local brewery, a collab beer we do with a brewery or some short-run one-off beer that we are able to track down. My job as beer buyer is to always be out looking and prospecting and trying to find another new fun, delicious thing for the beer drinking public to sink their teeth into." McFarland's current faves include Half Acre Akari Shogun, Three Floyds GumballHead and Solemn Oath Khloros.

Bucktown's The Map Room offers a chart of craft beer that can satisfy every lover of brew: over 200 brands representing 36 different brewing styles from all over planet Earth. Expect 26 drafts, about 150 bottles and a cask-conditioned ale cellared in a separate cask cooler, served via handpump and rotated regularly. Check the blackboard above the back bar for a list of rare bottled specialties, too. It's completely unpretentious, very friendly and BYOF, meaning you can bring in food from elsewhere and no one will bat an eyelash. Check the website for special tappings of rare beers and beers new to the market. Stop at the ATM because this winner is a cash-only operation.

If you love beer and meat (especially pig), The Publican is your pub. The beer-focused eatery feels as though you're dining and drinking at a European beer hall or at least a friendly farmer's place. You won't see carrot dust or urchin foam on your plate but you will encounter hearty, unadorned, satisfying fare and a craft beer list that will excite the senses. The added bonus: all of The Publican's waitstaff, bartenders and managers have achieved beer server certification, the first level of certification in the Cicerone program, so your questions won't be met by blank stares and stammers. The beer menu, helmed by Michael McAvena, is fluid but expect the draught roster to be jammed with rarities. With its communal tables and jovial atmosphere, this is not the place to pop the question but rather to revel with friends in an oyster, pork and deeply satisfying beer soiree. Bring the plastic because this quality doesn't come cheap. 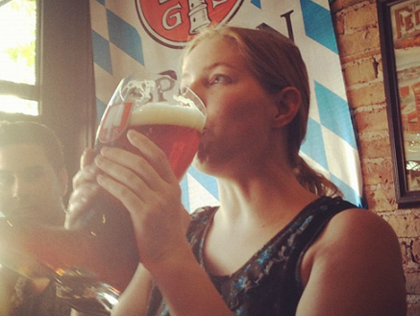 The name says it all. You can drink up at The Beer Bistro's two locations: the West Loop near the United Center and a newer spot on the North side. Bartenders and waiters love beer as much as you do and rely on the lessons provided by owner Bob McDermott, who has an encyclopedic knowledge on suds. Expect a rotating selection of high-end and mid-priced beers as well as $2 PBRs every Wednesday so no matter what you order, you're in good company. Count on around 21 on tap, nearly 100 in bottles and about 33 cans. Enjoy the kind of food mom made with brews that dad only dreamed of - French-style farmhouse ale, a 20-ounce cask of Great Lakes Commodore Perry IPA, the wonderfully named Delirium Tremens, Goose Island varieties and many more added by the day.

Jacky Runice has been a columnist with the Daily Herald Chicago since grunge music and flannel was the new black. Her fingers and gray matter have been busy as travel editor of Reunions Magazine; penning a column that was syndicated around the nation via Tribune Media Services. Her work can be found at Examiner.com.