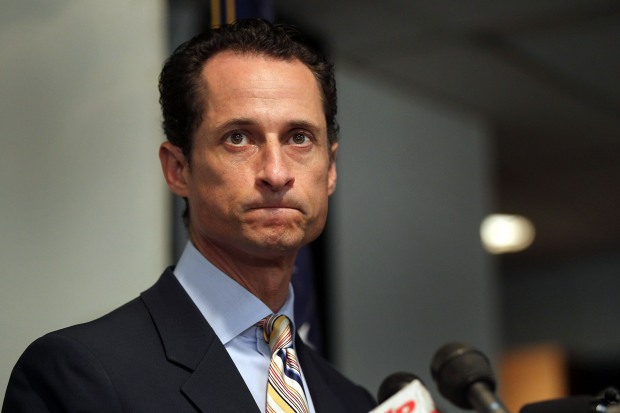 The woman, who told the gossip site "The Dirty" that she exchanged explicit messages with Weiner, claimed the pol offered to set her up in a condo in the South Loop last summer and get her a job.

On Tuesday, Weiner said he would continue his campaign for mayor, saying the scandal is in the past and that he is moving forward.

The woman told the Web site she was 22 when Weiner began the online relationship.

Site editor Nik Ritchie wrote that the woman claimed Weiner and the woman "had a relationship for six months, and she believed they were in love." The woman said the two never had sex.

Weiner allegedly used the pseudonym "Carlos Danger" in the conversations, the Dirty reported.

In one of the cleaner sexts, Weiner reportedly tells the woman: "Sadly my pics are out there to look at. Have you ever?"

The woman replies: "Yes. And I must say I was quite impressed."

"You are a walking fantasy," Weiner says in another reported text.

Weiner allegedly suggested they could meet and have sexual relations at the condo, the Dirty report said.

DNAInfo reported the condo is located at 1235 S. Prairie Ave.

Weiner also promised the woman a job at a political web site, the report added.

Weiner resigned from Congress two years ago after he admitted sending lewd messages and photos of his genitals to women online.

Weiner, who is married to former Hillary Clinton aide Huma Abedin and has been leading in most polls among the Democratic candidates for mayor, released a statement Tuesday in response to the latest revelations.

"I said that other texts and photos were likely to come out, and today they have. As I have said in the past, these things that I did were wrong and hurtful to my wife and caused us to go through challenges in our marriage that extended past my resignation from Congress. While some things that have been posted today are true and some are not, there is no question that what I did was wrong," Weiner said in his statement.

"This behavior is behind me. I've apologized to Huma and am grateful that she has worked through these issues with me and for her forgiveness. I want to again say that I am very sorry to anyone who was on the receiving end of these messages and the disruption that this has caused. As my wife and I have said, we are focused on moving forward."