CHICAGO (CBS) -- On Nov. 29, 1938 a pilot and photographer did something extraordinary.

They took off over the streets of Chicago and photographed the city, flying in straight lines, back and forth, capturing every corner.

It was the first of its kind back in those days as the United States launched a project to photograph the entire state from the air. The effort began in 1937 and took 10 years to complete.

The images of Cook County were taken on lights flown between November 14, 1938 and April 13, 1939 by Holmberg Aerial Survey Co., for the U.S. Dept. of Agriculture, Agricultural Adjustment Administration.

The original silver nitrate film negatives are gone, destroyed by the National Archives in the early 1980s because they had deteriorated.

As the original prints became worn and faded over time--or worse, lost--access has been restricted.

Until the Illinois State Geological Survey took on an initiative to digitally scan them.

There are 33,500 photographs, taken all over the state, and arranged by county.

Here is an index grid of the photos taken of Cook County. (You can click on all the images to enlarge.)

Around lunch time on that day, the pilot flew over downtown, capturing what is now Museum Campus:

Here is a closer look of the Adler Planetarium and Northerly Island, before it became an airport.

And the Field Museum and Shedd Aquarium. Notice how Lake Shore Drive ran on both sides of the Field Museum back then, before the city moved the northbound lanes to the west to create the Museum Campus today.

And here is a closeup of Soldier Field. 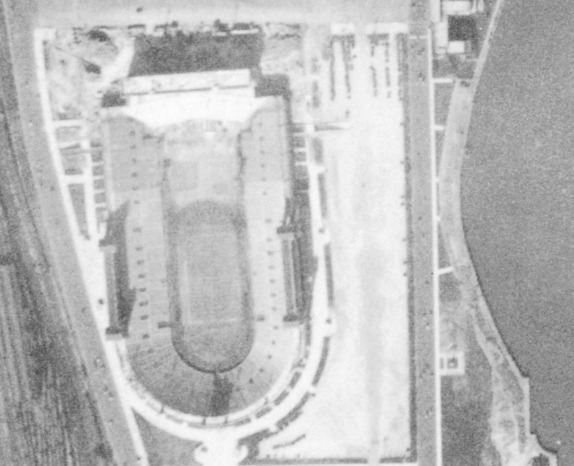 And just north of that, here is Lake Shore Drive's infamous S curve and Navy Pier

A closer look at what is now Maggie Daley and Millennium Parks.

And a tighter shot of both the S Curve and then Navy Pier.