CHICAGO (CBS) -- A dull, glazed expression washes over his eyes. His lips swell with tints of blue. His body turns limp and unresponsive, until finally, he collapses.

Jessica Goodman witnessed her friend experiencing the symptoms of an opioid overdose. She said she quickly rummaged through her purse for a nasal spray bottle filled with naloxone, pushed it into his nose, and released its contents. Within seconds her friend regained consciousness.

Traumatic scenes like the one Goodman experienced occur thousands of times each year, but without this life-saving drug, not all end as favorably.

More than 1,000 people died last year from opioid overdoses in Cook County alone, according to a 2018 Illinois Department of Public Health report.

Nationwide, nearly 48,000 people died from an overdose the year prior. West Virginia and Ohio led with over 45 deaths per 100,000 residents -- Illinois had less than half that amount.

Despite its life-saving abilities, naloxone's accessibility remains scarce. But it is being distributed in an unlikely place – Cook County Jail.

In August 2016, the jail partnered with Cook County Health to distribute nearly 5,000 naloxone kits, and Goodman is among the detainees that have received one.

Once administered, the drug binds to the opioid receptors in the brain, negating the flood of dopamine that opioids release. Naloxone does not create a euphoric sensation, nor does it numb pain.

Oftentimes, it catapults the individual into opioid withdrawal, so they may experience symptoms like extreme nausea or diarrhea.

Cook County Health funded this program until it received over $300,000 in grants from the Illinois Department of Public Health and the Public Health Institute of Metropolitan Chicago this year.

The jail surveyed re-incarcerated detainees over the past three years and found 30% of those given naloxone self-reported using it to reverse an overdose. In all but one of these cases the individuals overdosing were revived.

Supplying detainees with this overdose antidote is crucial, because inmates' tolerance diminishes significantly while behind bars. Once reintegrated into their communities, individuals may use the same dose of opioids that they did before their arrest  – a dangerous recipe for overdosing.

People newly released from prison were 129 times more likely to die from a drug overdose compared with the general population, a Washington State study found. Furthermore, opioid overdoses were the leading cause of death for individuals post-incarceration, said a report the New York Department of Health conducted.

Cook County Sheriff Tom Dart wants to proactively help individuals suffering from addiction and not "spew them back into the community," he said.

"People say, 'Well you're just encouraging people to use more opioids, because now they can have no fear, because they can be revived,'" Dart said. "That's insane."

Despite the thousands of naloxone-educated detainees that have benefited from this program, recent changes in the criminal justice system have made it challenging to ensure all at-risk individuals receive these kits.

Since bond reform began in 2017, bonds set at levels each defendant can afford means fewer people filter through the jail's drug programs pre-trial. From September 2017 to December 2018, the jail population decreased from 7,433 to 5,799 detainees. Oftentimes, the jail has a matter of hours to connect those suffering from addiction with resources like naloxone kits.

"We're trying to train people literally as they're leaving this place," Dart said.

As a result, the jail has partnered with community-based organizations like Treatment Alternatives for Safe Communities (TASC) to ensure everyone facing prosecution has access to naloxone, regardless of the duration of their stay. 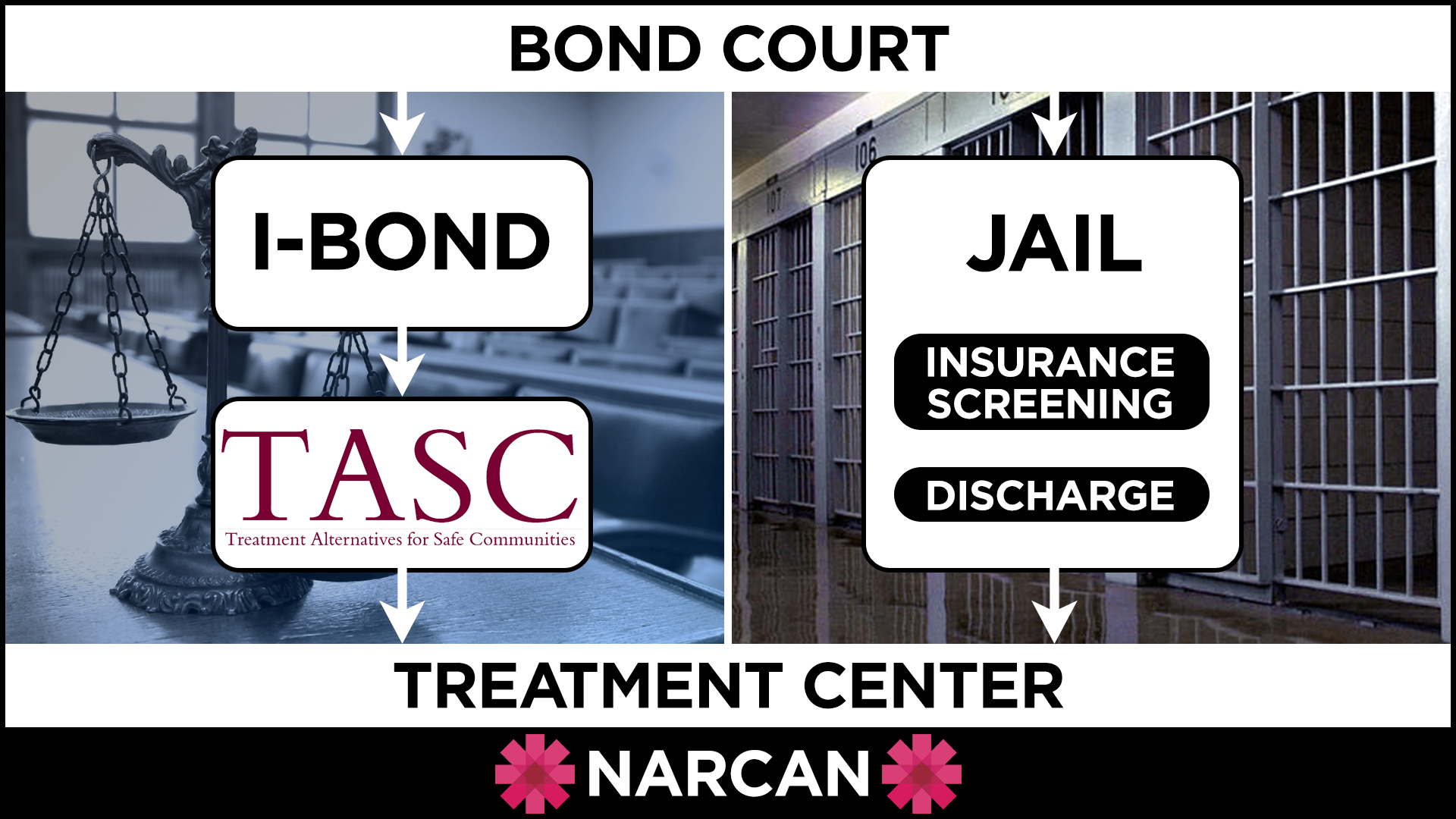 TASC's staff visits bond court several times a day to provide naloxone training and kits to defendants being released on I-bonds. They also connect at-risk individuals with treatment programs within the community

"I cannot think of a jurisdiction that should not be doing this," Dart said.

Implementing such programs in other jurisdictions hosts a variety of complications. Although Cook County Health covers the financial portion of the program, Cook County boasts one of the largest jail budgets in the country, which enables it to implement more innovative treatment initiatives like this one.

Cook County Health reported that their naloxone kits cost $115 a piece, a hefty sum to carve out of most budgets.

West Virginia, for example, has the highest rate of opioid-related overdose deaths within the United States, yet they only have naloxone in state vehicles and parole offices.

Outside of jails, naloxone has been universally legalized across the United States.

Purchasing it at retail pharmacies like Walgreens has increased in the last decade, including a 106% increase between 2012 and 2018 alone, according to a Center for Disease Control and Prevention study.

But these numbers still fall short. In 2018, only one naloxone prescription was given for every 69 high-dose opioid prescriptions, the same study reported.

Goodman said she gave her family one of her nasal sprays once she was released from jail.

Goodman said the drug not only saved her friend's life, but also revived her the two times she overdosed.