CHICAGO (CBS) — Chicago photographer Ashlee Wells Jackson has come up against two formidable opponents, Facebook and Instagram, in her quest to help mothers feel good about their post-baby bodies. She believes, after having her Instagram account shut down nine times, that the social networking giants are censoring motherhood.

Following a traumatic twin pregnancy in 2012, Ashlee gave birth to daughters Nova and Aurora at 24 weeks, sixteen weeks before their due date. Aurora passed away soon after, due to twin-to-twin transfusion syndrome. As Ashlee struggled with the loss of her daughter, as well as the exhaustion and stress of having a premature baby, she came to a distressing realization that her body would likely never go back to its pre-pregnancy shape.

Finding solace in her art, Ashlee turned the camera on herself and took photos of her own body, which she posted on Facebook. Almost immediately, a virtual floodgate opened. Friends, family and complete strangers reached out to Ashlee to share their anguished pregnancy stories and the intense feelings of despair, disgust and disconnection they felt in relation to their post-pregnancy bodies.

Self-criticism and a tendency to compare oneself negatively to others, particularly to celebrities whose baby weight seems to vanish overnight, is not unusual, says Chicago author and psychologist Sarah Allen of Northbrook. "Society tells us to look a certain way," claims Dr. Allen.

Ashlee began taking on new clients, women eager to shatter the stereotypes surrounding what mothers should look like, women eager to find joy in their post-baby bodies. Her work led to the launch of the "4th Trimester Bodies Project" which, she tells CBS2's Kate Sullivan, "is dedicated to embracing the beauty of our bodies after motherhood."

According to Ashlee, what she quickly discovered is that Facebook and Instagram seem to treat celebrity moms and non-celebrity moms differently. Her Instagram account, filled with photos of her clients, has been shut down nine times. Photos on Facebook have been removed. At first "we were outraged and upset," states Ashlee. "But I thought, oh, this is certainly some fluke."

Ashlee says many female celebrities post risqué photos that are not removed or flagged as inappropriate on social media platforms. The photo of Kim Kardashian, below on the left, can be found on her public Facebook fan page. Beside it is a photo of Ashlee's client, a photo she says was removed by the company. Even a simple search on Facebook yields results such as "Sexy photos," a fan page that shares explicit images of scantily clad women. 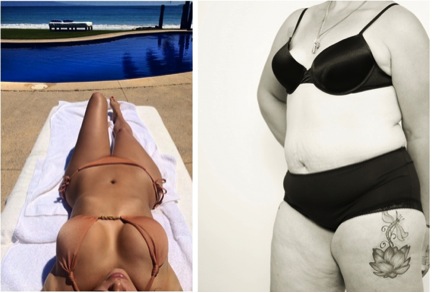 CBS reached out to Facebook and Instagram about the 4th Trimester Bodies Project and this was their response: "We try hard to find a good balance between allowing people to express themselves creatively and having policies in place to provide a comfortable experience for our global community. We have long allowed photos of mothers breastfeeding. Our guidelines do put limitations on nudity, including nude images of children, to help keep kids safe online."

Ashlee has created a petition on change.org to protect her content and encourage social networking companies to rethink their policies. To date, the petition has garnered close to 20,000 signatures. "We are not imperfect or broken after pregnancy," she says. "We are not doing anything that is risqué."