Within the Chicago city limits, there are more than 7,600 acres of parkland split up into 570 individual parks. And you might be surprised at what some of them have to offer. Here's a sample of 10 of the city's great parks. 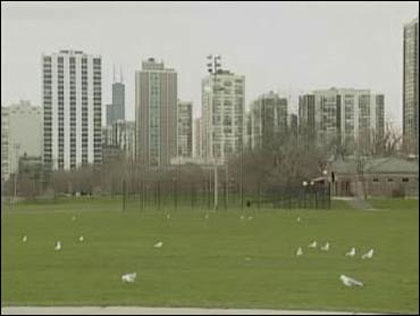 What began as a small public cemetery on what was then the city's northern fringes is now the front yard for most of the city's North Side, from the north end of Lake Shore Drive at Hollywood Avenue south all the way to North Avenue.

At Montrose Avenue, you'll see kids flying kites in the summer and sledding in the winter on Cricket Hill. At Waveland Avenue, the Sydney R. Marovitz Golf Course puts you right up against Lake Michigan as you tee off. At Diversey Parkway, you can practice your golf skills at the driving range, or bring the kids for a round of miniature golf, on the 18-hole course featuring waterfalls and footbridges. At Fullerton Parkway, top professional groups perform plays in the Theater on the Lake.

And as if that weren't enough to sell the park, you'll also find a bird sanctuary, a paddleboat lagoon, a pond with prairie plants and wildlife, and statues of historical figures from Abraham Lincoln to Johann Friedrich von Goethe. 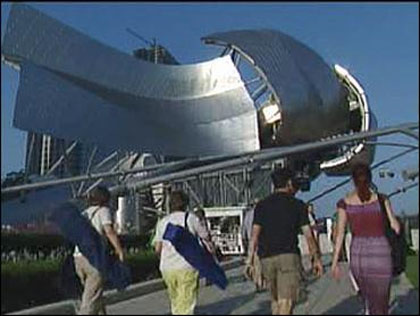 Not long ago, an undignified below-grade rail yard and parking lot occupied this land at the northwest corner of Grant Park downtown. But in the six years since it opened, Millennium Park has quickly grown to become one of the city's most popular tourist attractions.

When weather permits, kids and a few adults splash in the Crown Fountain, where jets of water flow from the giant video images of Chicagoans' faces. The Lurie Garden offers quiet and botanical beauty. And of course, tourists and locals alike line up to get their picture taken in front of "Cloud Gate," better known as the Bean.

The central attraction at Millennium Park is the Jay Pritzker Pavilion, which hosts the annual Celtic, Gospel, Latin and Country Music festivals, summertime classical concerts by the Grant Park Symphony Orchestra, and an assortment of other performances from world music to mainstream rock. Just to the east, the 1,525-seat Harris Theater for Music and Dance features everything from ballet to folk concerts. And in the winter months, strap on your ice skates for the McCormick Tribune Ice Rink. 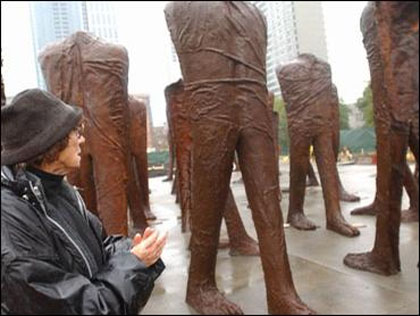 It's the front yard for downtown Chicago, and some of the most beautiful sights in all the city can be found there.

At the north end, the quiet Daley Bicentennial Plaza offers everything from yoga to 16-inch softball, and an ice rink during the winter.

But expect a crowd south of Monroe Drive, particularly during the summer months. Many summer concerts have moved to the Pritzker Pavilion in recent years, but the Petrillo Music Shell is still the place to be for the Blues and Jazz festivals. You can lay a blanket on the lawn in front, or if you're early enough, get one of the seats at the edge of the stage.

Just to the southeast of the Petrillo is the dazzling Buckingham Fountain, one of the city's most treasured landmarks. The center jet shoots 150 feet into the air every hour, and a light show illuminates the waters at night. Beyond Buckingham Fountain is Hutchinson Field, the site for the annual Lollapalooza music festival, and the stage for Barack Obama's election night rally when he was elected president in 2008.

To the west of Hutchinson Field is the striking sculpture "Agora" by Magdalena Abakanowicz, which depicts walking cast-iron figures without heads or arms.

Grant Park is also home to three of the city's most famous museums – the Art Institute, directly in front of the Petrillo Band Shell, and the Field Museum and Shedd Aquarium, on the Museum Campus at the southern edge of the park. 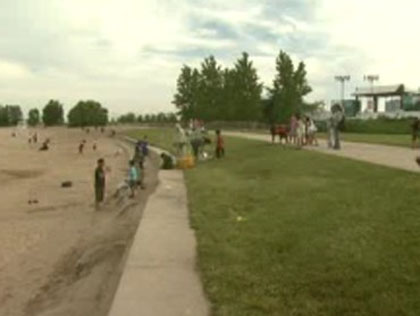 It may not have the prominence of the other lakefront parks, but Burnham Park has a lot to offer nonetheless. It extends from the Museum Campus south all the way to the north end of Jackson Park at 56th Street.

South of McCormick Place, among the highlights are a popular skate park at 31st Street, and at 55th Street adjacent to the Hyde Park neighborhood, the breathtaking Promontory Point. 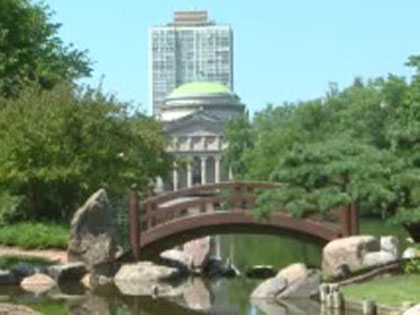 The magnificent Museum of Science and Industry at the north end of this glorious park draws more than 1.5 million visitors a year. But the park continues for another mile south, and there's plenty more to see.

Jackson Park was designed by Frederick Law Olmsted and Calvert Vaux, the same team that was behind Central Park in New York. The park is well known as the main site for the 1893 World's Columbian Exposition. The museum occupies the only remaining building from the fair, but there are other reminders, most notably the shimmering gold Statue of the Republic at Hayes and Richards drives. It is a one-third size replica of the original statue that graced the World's Fair.

On Wooded Island a short distance south of the museum, look for the serene Osaka Japanese Garden, with its formal gates and pavilions and babbling waterfall. Also on the island is the Paul H. Douglas Nature Sanctuary, a favorite spot for birdwatchers.

Also of note in Jackson Park is the 63rd Street Beach House, an impressive Mediterranean Revival building with landscaped courtyards, and airy open balconies that look out toward the lake. The park also features an 18-hole golf course. 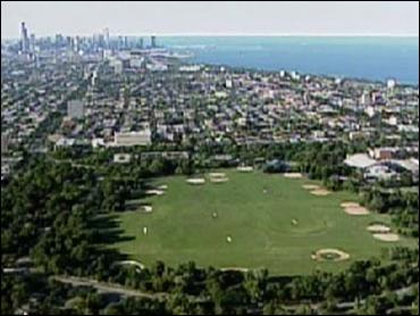 This park is just over a mile inland, located between King Drive and Cottage Grove Avenue and 51st and 60th streets. It received a lot of attention in recent years for the stadium that would have been built for the 2016 Olympics. But even though Chicago lost that bid, there are still more than ample reasons to visit Washington Park.

The DuSable Museum of African-American History is located on the east end of the park at 56th Street. Deeper in the park, you'll find some of the city's most popular baseball fields, where community leagues play on 17 different diamonds. During the warmer months, you'll find fishing at the 32-acre lagoon.

Toward the southeast end of the park is "Fountain of Time," a majestic stone sculpture by Lorado Taft depicting Father Time and "the mass of humanity." Just to the east, walk a mile down the Midway Plaisance through the University of Chicago campus and you'll be back in Jackson Park.

Washington Park is also the site for the African-Caribbean International Festival of life, and the ending point for the Bud Billiken Parade. 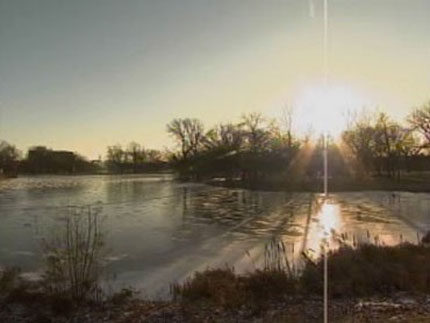 This park is a fair distance from the lakefront parks, located on the West Side and bisected by Central Park Boulevard and Madison Street. But many Chicagoans know the park for its conservatory, which features 84 varieties of palm trees, one of the most varied cactus collections in the Midwest, and a hands-on lesson on photosynthesis for the inquisitive young minds. The conservatory also has its very own 'L' stop on the Green Line.

A couple blocks south of the conservatory at Madison and Central Park, the park field house a striking structure, with an elaborate Spanish baroque façade and a shiny gold dome. Among the features inside is a popular public boxing ring, where lessons are available.

Garfield Park also features a formal garden, a lagoon and a historic bandstand. 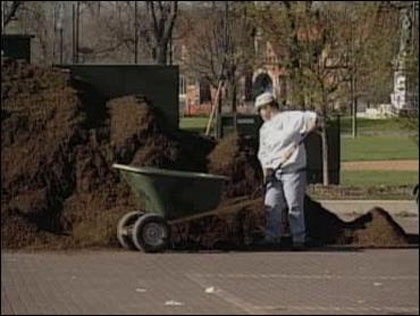 This park is centered at Division Street and Sacramento Avenue, a short drive distance northeast of Garfield Park.

One of the most beloved features is the boathouse, a Prairie-style structure adjacent to the park's lagoon, where you'll find an art fair and a Latin jazz festival in the summer months. Also adjacent to the lagoon, sports and fitness classes are available at the Humboldt Park field house. And elsewhere in the park, the Chicago Cubs funded the 800-seat Little League baseball stadium, known appropriately as Little Cubs Field.

And while street food is hard to find in Chicago, in Humboldt Park you'll find a vast array of Puerto Rican food vendors. For one example, look for the El Secreto del Sabor truck, and you can treat yourself to empanadas, alcapurria (seasoned meat in fried plantain dough), bacalitos (fried cod fritters.)

This park is smaller than the others so far on this list; it occupies a square block in a quiet, residential section of the West Rogers Park neighborhood. But if you visit Indian Boundary Park, you might find some surprises – most notably that Lincoln Park isn't the only city park with a zoo.

Bounded by Estes Avenue on the north, Lunt Avenue on the south and Rockwell Street on the west, Indian Boundary Park includes a small lagoon filled with ducks, a children's spray pool, and a sandbox. Kids also can't get enough of the maze of towers and slides at the playground.

But back to that zoo. It's not a big zoo, but it will bring you face-to-face with goats, sheep, ducks and chickens. You won't find that in any other city park.

The park's Cultural Center features Native American-themed décor, in recognition of an old territorial boundary between the Pottawattomie tribe and the federal government. Painting, piano, dance, voice and theatre arts lessons are available there, and the auditorium hosts plays and concerts.

You'll find this hidden green oasis along the Chicago River's South Branch south of 18th Street in Chinatown. The site used to be a rail yard, but it was transformed in the late 1990s into a beautiful green space with trees, a playground, and Chinese landscape elements including a pagoda-style pavilion. Bamboo and gingko trees grace the park's gardens.

Every July, the park hosts the festive Chicago Dragon Boat Race. It is also the finishing point for the Chicago River Flatwater Classic, the city's only kayak race.