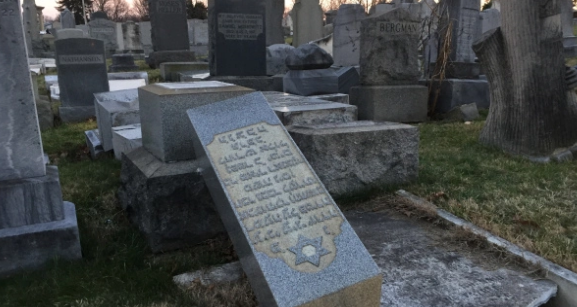 PHILADELPHIA -- More than 100 headstones have been vandalized at a Jewish cemetery in Philadelphia, damage discovered less than a week after similar vandalism in Missouri, authorities said.

A man visiting the cemetery called police at 9:40 a.m. Sunday to report that three of his relatives’ headstones had been knocked over and damaged.

“The cemetery was inspected and approximately 100 additional headstones were found to be knocked over,” apparently sometime after dark Saturday, a police spokeswoman said in a statement.

A criminal mischief-institutional vandalism investigation will be conducted by the police Northeast Detectives Division, she said.

The Jewish Federation of Greater Philadelphia lists Mount Carmel as a Jewish cemetery.

Israeli foreign ministry spokesman Emmanuel Nahshon called the report “shocking and a source of worry,” although he added that he had “full confidence” that authorities in the U.S. would be able to catch and punish those responsible.

“We must find those responsible and hold accountable,” he tweeted.

The organization called on President Donald Trump to deliver a speech about his intentions to combat forms of hate, including anti-Semitism and Islamophobia.

The damage comes less than a week after a Jewish cemetery in suburban St. Louis reported that more than 150 headstones were vandalized, many of them tipped over.

It also comes less than two weeks after another cemetery, the Holy Redeemer Cemetery in Phildelphia’s Bridesburg neighborhood, was vandalized, CBS Philly reports. A man walking his dog found more than 30 tombstones knocked over. Police have not drawn any connection between the two Philadelphia incidents.

Police said Sunday evening that the Anti-Defamation League, due to support from the Mizel Family Foundation, is offering a $10,000 reward for information leading to the arrest and conviction of those responsible for the latest vandalism. A local Fraternal Order of Police lodge also is offering a reward of $3,000.

Philadelphia Mayor Jim Kenney said authorities were doing everything possible to find those “who desecrated this final resting place.”

“My heart breaks for the families who found their loved ones’ headstones toppled,” he said in a statement. “Hate is not permissible in Philadelphia.”

Aaron Mallin told WPVI-TV that he discovered the damage when he came to visit his father’s grave. He called it “very disheartening” and said he hopes it wasn’t intended as an anti-Semitic attack.

“I’m hoping it was maybe just some drunk kids,” he said. “But the fact that there’s so many, it leads one to think it could have been targeted.”