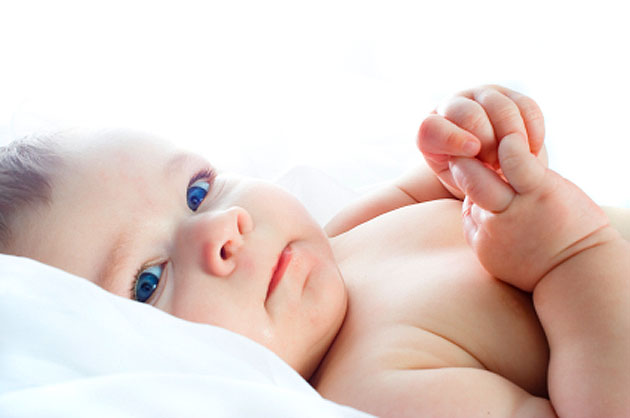 Pediatricians usually start monitoring kids for obesity risk at a 2-year-old's well-child visit, but a new study shows severe obesity is predictable as early as six months old. The authors recommend children start being screened for the condition as babies.

Cincinnati Children's Hospital Center researchers found that measuring body mass index (BMI) - which doctors can calculate using a child's height and weight and then plotting the numbers on a graph - in babies as young as 6 months, could pinpoint the children most likely to go on to develop obesity.

The study, presented Friday at the national Endocrine Society meeting in Boston, is the first to show that weight gain during the baby years differs in those who eventually go on to develop obesity, the authors said.

To learn more about early predictors of obesity, they analyzed electronic records of children under the age of 6, including 783 lean children and 480 severely obese children. The youngsters were from varying economic backgrounds.

The authors reported that the body mass index ratings in children who become severely obese by age 6 began to differ from children who remain normal weight as early as 4 months of age.

"We found in this study that growth patterns differ at 6 months of age in kids who become severely obese," said the study's lead author Dr. Allison Smego, a fellow in the division of Endocrinology at Cincinnati Children's.

In light of the findings, Smego said, "We recommend that pediatricians start to monitor BMI at 6 months of age and onward."

She said a body mass index exceeding the 85th percentile at 6, 12, and 18 months old can identify babies at risk for obesity years earlier than doctors are typically monitoring children for the condition.

Early obesity is a concern because it can set children up for other serious and chronic health conditions, including diabetes and heart disease.

"We think we really should be more concerned earlier in order to prevent obesity, instead of playing catch up," Smego told CBS News.

For those babies who are at risk for obesity, she said it's important to assess what they are eating and if they are on an age-appropriate diet, and to educate families about nutrition issues, such as portion control.

"Once they're transitioned off formula, we need to talk about what are the healthy choices families can make," Smego said.

The study did not look at why BMI at such an early age is a predictor of obesity, but she said future research will investigate the question. "It's probably multifactorial," said Smego.

Dr. Wendy Sue Swanson, executive director of Digital Health at Seattle Children's Hospital and a pediatrician at The Everett Clinic in Mill Creek, Washington, said, "It's a hard conversation in a culture that loves round babies."

All parents want to see their babies thrive, she said, but the research is helpful data that supports a healthy shift in thinking.

"This helps us educate and identify kids at risk earlier and helps parents do things earlier to set their kids up for success. This is win/win and we have to be empathetic -- very careful and loving and thoughtful about the advice we're giving parents," Swanson told CBS News.

The Cincinnati authors noted that most of the obese children were black and from low-income households.

Also, to confirm their findings, the researchers repeated their study in a third group of nearly 2,650 children seen at a hospital-based pediatric clinic in Denver. The Colorado research included Hispanic children and showed that a BMI above the 85th percentile at least tripled the likelihood that a child would face severe obesity by age 6.