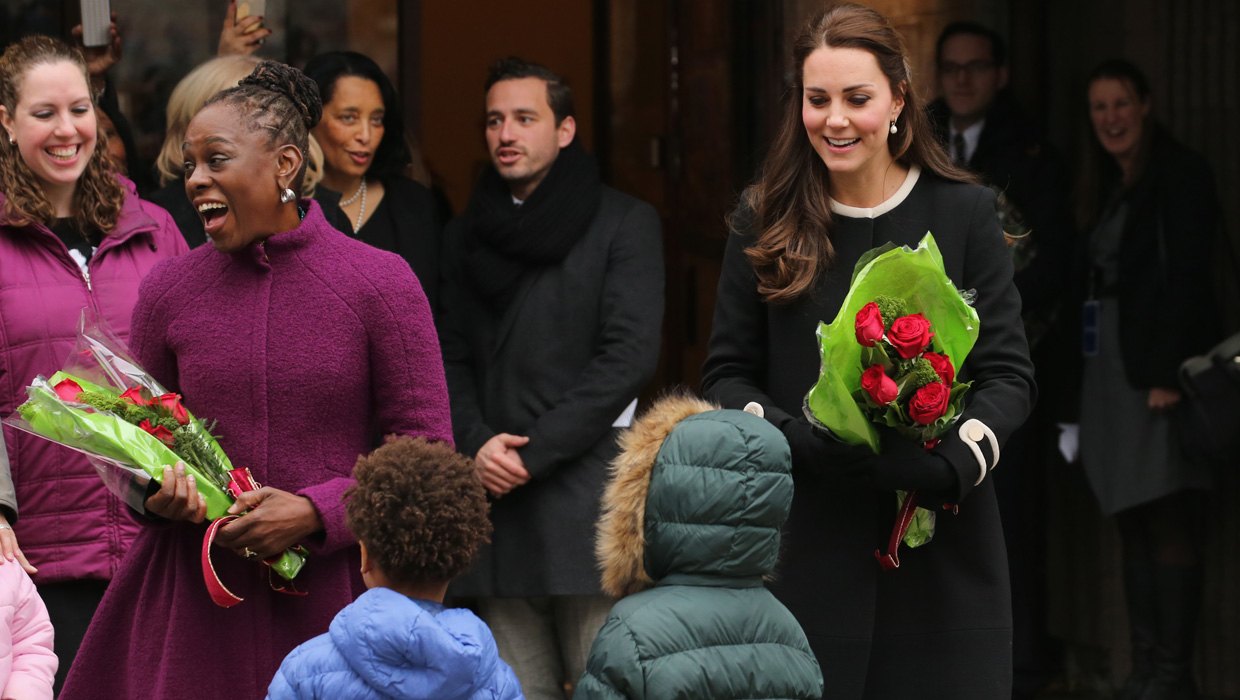 Prince William headed to Washington while Kate, Duchess of Cambridge, stayed back in New York on the first full day of the couple's visit to the United States.

The duchess got to know some prominent British arts, technology, design and media figures in New York on Monday, when she joined them for lunch at British Consul General Danny Lopez's home.

Earlier in the day, she toured a childhood development center that provides educational and mental health services to about 3,300 children and families each year with New York City's first lady.

Wearing a black crepe coat with beige trim by British fashion label Goat, the pregnant Duchess of Cambridge shook hands with Chirlane McCray before both entered the Northside Center for Child Development in Harlem on Monday.

The two spent about an hour at the center, and Kate was greeted with cheers from a crowd of several dozen spectators standing behind police barricades across the street.

William, meanwhile, arrived at the White House Monday morning for a meeting with President Barack Obama. The two men sat side-by-side in the Oval Office and exchanged pleasantries before a crush of journalists, including talking about the frenzy surrounding the birth last year of William and Kate's son, Prince George.

"I remember when George was born, I forgot to work out whether it was a boy or a girl," he's heard saying in video captured by ITV. "The excitement of the event and everything else was just chaos."

"It's going to be interesting next year. A busy year next year," he told Mr. Obama, alluding to the upcoming birth of George's younger sibling.

William and Kate, both 32, arrived in New York on Sunday, their first official visit to the U.S. since a 2011 trip to California and their first taste of the Big Apple. William came to Washington solo for his visit to the White House and a speech on wildlife trafficking at the World Bank.

During their three-day trip, the royals will be staying at the Carlyle Hotel, a favorite of William's mother, the late Princess Diana, when she frequently visited Manhattan in the 1990s.

William and Kate, who are expecting their second child in April, have scheduled a full slate of events in New York, including a visit to the National Sept. 11 Memorial and Museum and a basketball game between the Brooklyn Nets and the Cleveland Cavaliers.

Their visit also will include some events with other high-profile guests. Former Secretary of State Hillary Rodham Clinton and daughter Chelsea Clinton are accompanying William and Kate to a New York reception highlighting conservation efforts.

The royals also are due to join actor Tom Hanks, opera singer Renee Fleming and others at a black-tie, up-to-$10,000-per-seat scholarship fundraiser for the University of St. Andrews, the Scottish institution where the royal couple met and earned degrees.

They are visiting a city where thousands have protested over the past week to decry a grand jury's decision not to indict a white police officer in the chokehold death of an unarmed black man, Eric Garner.

Even Cavaliers star LeBron James said Sunday it was "possible" he might wear a shirt saying "I can't breathe" -- a rallying cry that has developed around Garner's last words -- before Monday's game.

He added that playing with William and Kate in the audience would be "a huge honor."