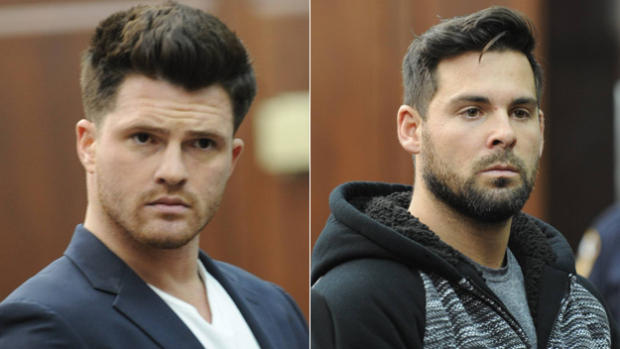 NEW YORK -- Two men have been arraigned on charges in connection with the death last month of a Connecticut man last seen attending a party at a Manhattan luxury apartment building.

James Rackover, of Manhattan, and Lawrence Dilione, of Jersey City, New Jersey, both pleaded not guilty Tuesday to concealment of a human body, hindering prosecution and tampering with evidence.

Rackover owned the East Side apartment where authorities say 26-year-old Joseph Comunale was stabbed to death.

Investigators have been working to determine who killed the Stamford, Connecticut man, whose body was found in New Jersey. Murder charges could still be forthcoming.

Rackover, 25, of New York City, and Dilione, 28, were arrested last month on charges that initially included murder. Rackover’s lawyer, Maurice Sercarz, has said the case has “serious problems” and will be “vigorously” contested. He told CBS News last month the two defendants were initially booked for second-degree murder, but those charges were “mysteriously” missing from the criminal complaint. He believes prosecutors do not have enough evidence to charge his client with murder.

Authorities said Comunale was last seen alive at a party early Nov. 13 at Rackover’s Manhattan apartment complex. Police said the victim’s bloodied clothing, sheets and towels were found in plastic bags that had been thrown down the building’s garbage chute. The criminal complaint filed for Rackover and Dilione said Dilione led authorities to Comunale’s body, which was found stabbed 15 times and partially burned.

The complaint also cites an unidentified witness who saw Rackover allegedly placing a large duffel bag into the trunk of a black vehicle with tinted windows on Nov. 13. Investigators tracked a car traveling to New Jersey the same night and back to Manhattan early Nov. 14. Surveillance images captured Rackover driving what appeared to be a black Mercedes into a garage nearby his apartment building, parking and leaving the garage.

The complaint says a black 2015 Mercedes Benz is registered to Jeffrey Rackover, who also lives in the complex, but in a different apartment. James Rackover told investigators Jeffrey is his father. A family friend told CBS New York that Jeffrey Rackover, a celebrity jeweler, adopted the “troubled” younger Rackover and “took him under his wing.”

A third person, 26-year-old Max Gemma, of Oceanport, New Jersey, has been arrested in connection with the case. He has pleaded not guilty to charges of hindering prosecution and tampering with evidence.

Prosecutors allege Gemma changed his clothing, and had something to do with the concealment of certain items, but wouldn’t elaborate, reported CBS New York.