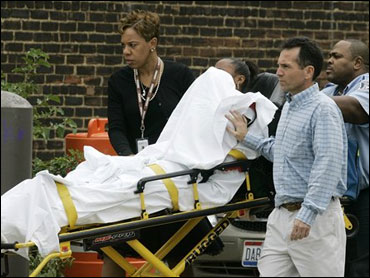 A 14-year-old suspended student, dressed in black, opened fire in his downtown high school Wednesday, wounding four people as terrified schoolmates hid in closets and bathrooms and huddled under laboratory desks. He then killed himself.

"When he got suspended, he said 'I got something for you all,' and I thought he was just playing 'cause he says it all the time," said a fellow student. "But I see that he was for real."

Asa H. Coon was armed with two .38 caliber revolvers, and police found a duffel bag stocked with ammunition and three knives in a bathroom, officials said. Parents were angry that firearms got into a school equipped with metal detectors that students said were intermittently used.

Officials said two teachers and two students were shot, and that a 14-year-old girl fell and hurt her knee while running out of the school.

Witnesses said the shooter moved through the converted five-story downtown office building, working his way up through the first two floors of administrative offices to the third floor of classrooms. Officials said he was wearing a black Marilyn Manson concert shirt, black jeans and black-painted finger nails.

"He just came back and started shooting at people," a student tells CBS News. "He would just shoot at anybody who was in the hallway, so everybody just ran down the hallway."

Coon "came out of the bathroom and bumped Mike and he (Mike) punched him in his face. Mike started walking. He shot Mike in the side." Peek, 14, didn't know Coon had a gun, Smith said.

Antonio Deberry, 17, said he and his classmates hid under laboratory tables and watched the shooter move down the hallway. "I saw him walking past. He didn't see us, we saw him." The shooter swore and shot several times, Deberry said.

LeVert said she hid in a closet with two other students after she heard a "Code Blue" alert over the loudspeaker. She said she heard about 10 shots.

Darnell Rodgers, 18, was walking up to another floor when the stairway suddenly became flooded with students.

"It took me a couple of minutes to realize that I was actually shot, when I felt my arm burning in the area, that's when I realized that I had got shot," Rodgers said.

"They were screaming, and they were saying, 'Oh my God, oh my God.' I knew something was wrong, but thought that it was probably just a fight, so I just kept going," Rodgers said.

Rodgers was released from a hospital after treatment for a graze wound to his right elbow.

Coon had been suspended since Monday for fighting near the school that day, said Charles Blackwell, president of SuccessTech's student-parent organization. He did not know how Coon got into the building Wednesday.

Blackwell said that there was a security guard on the first floor, but that the position of another guard on the third floor had been eliminated.

Students and parents described the gunman as troubled, Reynolds reports.

"It could have been avoided, because there were warning signs," said one parent.

Student Frances Henderson, 14, said she often got into arguments with Coon, who once told her, "I got something for you all." He was a "gothic" who usually wore a trench coat, black boots and a dog collar, she said.

Students stood outside the building, many in tears, hugging one another and on cell phones. Others shouted at reporters with TV cameras to leave them alone. Family members also stood outside, waiting for their children to be released.

Math teacher David Kachadourian, 57, was in good condition; Michael Grassie, a 42-year-old teacher, was in surgery, but his condition was unavailable. The other two injured teens were taken to a children's hospital, which would not release their names, ages or conditions.

Deberry's mother, Lakisha Deberry, said she was upset that metal detectors at the school were not always in use.

"You never know what's going on in someone's mind," said Deberry, adding that she was required to go through a metal detector and present an identification card whenever she wanted to drop off something at school for her children.

The shooting occurred across the street from the FBI office in downtown Cleveland, and students were being sent to the FBI site.

Classes at all schools in the Cleveland Metropolitan School District will be canceled Thursday, said Eugene Sanders, chief executive officer of the district. Counseling will be available Thursday for students at recreation centers throughout the city, Sanders said.

SuccessTech Academy is an alternative high school in the public school district that stresses technology and entrepreneurship. It is housed on several floors of the district's downtown Cleveland Lakeside Avenue administration building.

"It's a shining beacon for the Cleveland Metropolitan School system," said John Zitzner, founder and president of E City Cleveland, a nonprofit group aimed at teaching business skills to inner-city teens. "It's orderly, it's disciplined, it's calm, it's focused."

The school has about 240 mainly black students with a small number of white and Hispanic students.

Coon was white and Henderson, the student who said she frequently argued with him, is black, but she said she didn't believe race played a role in the shootings.

The school, opened five years ago, ranks in the middle of the state's ratings for student performance. Its graduation rate is 94 percent, well above the district's rate of 55 percent.