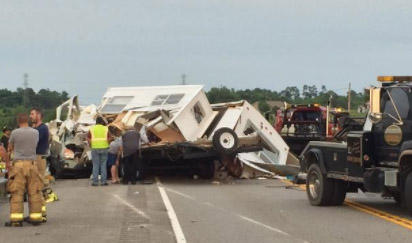 Sheriff Curt Folger says a truck hauling a camper was driving eastbound when the camper came loose and went into the westbound lanes, hitting an SUV head-on.

The sheriff says the driver of the SUV was killed at the scene, a 10-month-old baby was airlifted to a hospital in critical condition, and two other people were also injured. Their conditions weren't known late Monday night.

"The westbound vehicle attempted evasive action by moving to the shoulder, but the camper was on top of it quicker than ... well, there wasn't nothing they could do," Sheriff Folger said.

Folger says the two people inside the truck weren't hurt in the crash.

"It appears that it is a very, very tragic accident," Sheriff Folger said.

U.S. 150 was closed nearby several hours while accident reconstruction teams investigated the scene.