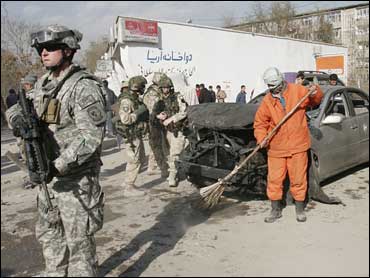 A suicide car bomber targeting an American convoy exploded about 200 yards outside the U.S. Embassy in Kabul on Thursday, killing at least four Afghan bystanders as people entered the compound for a Thanksgiving Day race.

Police officer Abdul Manan said the explosion was set off by a suicide bomber in a Toyota Corolla.

Spokesman Mark Stroh told CBS News' Fazul Rahim that all U.S. Embassy staff were accounted for and there were no known injuries.

The blast happened on the last day of a visit by a United Nation's Security Council delegation. The U.N. had warned its staff in Afghanistan of possible terrorist attacks coinciding with the visit.

The U.S. Embassy was hosting a Thanksgiving Day fun run beginning at 9 a.m., so Americans and other Westerners were entering the embassy compound when the bomb went off, sending some participants sprinting for the embassy gates.

"I was about 30 or 40 yards inside the gate. There was a large explosion. I felt the shock wave, though it wasn't all that strong," said Danny Cutherell, a 26-year-old aid worker from Virginia. "We were about 200 yards from the blast when it went off, but we were behind the embassy wall and that protected us."

Cutherell said about 20 participants in the run had been locked inside a room with double-locking doors at the embassy's security checkpoint and that guards would neither let them in or out. "We're here for a while," he said.

"It was a bit shocking but it's also not that shocking because it is Thanksgiving and we had heard there was going to be tightened security today," Cutherell said. "It's just scary to be that close to it."

Insurgent attacks in Kabul have been rare this year, although they have launched a few spectacular assaults, including one targeting the Indian Embassy on July 7 that killed 60 people and left over 140 others wounded.