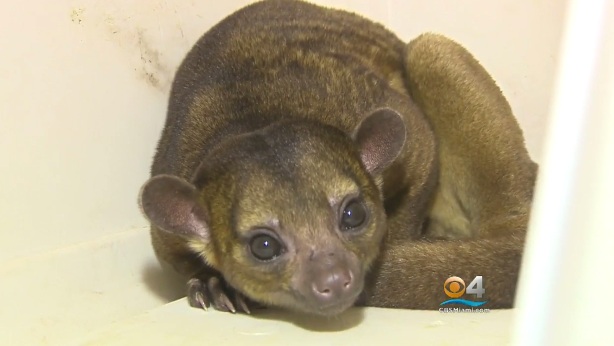 MIAMI -- A 99-year-old woman in Miami-Dade woke up to quite the surprise on Tuesday -- an exotic animal sleeping on her chest.

CBS Miami reports that the animal is usually found in the rain forests of Central and South America, but somehow made its way into a southwest Miami-Dade home.

The animal is a kinkajou, which looks like a monkey, but is actually in the raccoon family.

"The lady is sound asleep and she feels something on her chest and she slowly wakes up, and realizes that there's an animal curled up sleeping on her chest," said veterinarian Don Harris to CBS Miami. "I don't know, I guess her first impression was it might be a cat, but when they both got a look at each other, they both freaked out. The lady screamed, the kinkajou went into her attic."

The woman called her daughter and a friend who were able to lure the mysterious animal out of the attic. The exotic animal was taken to an animal hospital in south Miami, CBS Miami reports.

"They're not predators, they're very peaceful animals, they're arboreal, they live in the treetops, they live in the branches," explained Harris. "They eat fruit and bugs and things like that, they're pretty docile creatures, unless cornered, and then their teeth are their defense mechanisms."

Also known as honey bears, kinkajous are rarely seen because they are nocturnal.

But, if startled, Harris said they can be dangerous, CBS Miami reports.

"Someone who was bitten by an animal like this that didn't get proper medical care could lose a limb," he said.

Luckily, this kinkajou just seemed to want to cuddle.

"Some people keep them as pets, but I don't know really how often they make really good pets," Harris said. "It's not the kind of animal that you can safely cuddle up with. They're very interesting, they're very rare. Special permits are required to have them, so the question is where did this animal come from?"

CBS Miami has learned that the kinkajou is apparently a pet in South Florida, and the owner is coming to pick it up on Wednesday.