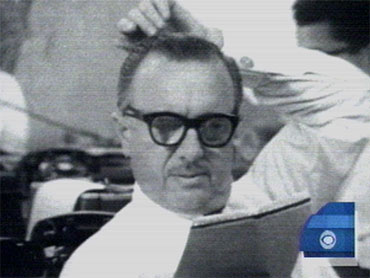 Yet the reporter and television news anchor once known as the "Most Trusted Man in America" never forgot his roots. Shortly after he died last year at age 92, a search of his work desk turned up a neatly folded canvas shoulder bag used for delivering Liberty magazine, which Cronkite sold door-to-door as a child.

"He was a newspaper man at heart," said Don Carleton, curator of the new exhibit "Cronkite: Eyewitness to a Century," which opens Saturday at the LBJ presidential library at the University of Texas.

Carleton believes the bag may be the one Cronkite used to deliver the 5-cent magazine when he was 8 or 9 years old, earning half-a-penny per paper at the start of what would become one of America's most famous journalism careers.

The bag is featured in the exhibit culled from Cronkite's personal archive, which is held by the university's Briscoe Center for American History. It covers Cronkite's life from a budding journalist at the University of Texas where he dropped out as a junior in 1935 because classes were getting in the way of journalism, Carleton said to his days as a pioneering broadcast CBS newsman covering presidents and the Vietnam War.

Carleton, executive director of the Briscoe Center, helped Cronkite research and prepare for his 1989 best-selling autobiography "A Reporter's Life."

Also known as "Uncle Walter," Cronkite signed off for the final time as anchor of the "CBS Evening News" in 1981. Carleton said he wants the exhibit to be more than a trip down memory lane for baby boomers who grew up getting news from Cronkite.

"We hope a whole new generation will come to appreciate what he did for professional journalism and objectivity and the critical role journalism plays in democracy," Carleton said.

But nostalgic it is, right from the film clip that greets visitors and features the venerable newsman's recognizable baritone: "I'm Walter Cronkite."

The exhibit draws from Cronkite's collection of reporting notebooks, television scripts, photographs, letters from colleagues and dignitaries, and vast collection of press credentials. The exhibit includes some of his first newspaper clippings, yellowed with age but preserved thanks to a proud parent.

"His mother saved a lot of stuff," Carleton said.

Much of the archive already had been donated to the Briscoe Center, but Cronkite's will instructed relatives to search his home for other items. His son Chip found his father's war correspondent uniform from World War II buried deep in a closet.

"It was like seeing superman's cape in Clark Kent's closet," Chip Cronkite said by telephone from New York. "It was a thrill to see."

The uniform and some other items will go to the Smithsonian in Washington, D.C., or the Paley Center for Media in New York after the exhibit closes in January, Chip Cronkite said.

Film clips include Walter Cronkite's famous newscast of the 1963 Kennedy assassination when Cronkite announced the president had died, then paused several seconds to compose himself before continuing with the news.

The Kennedy assassination marks the beginning of the most powerful sequence that runs from the early 1960s to Cronkite's reporting from Vietnam and on the Watergate break-in that would ultimately led to President Richard Nixon's resignation.

Also on display are personal items, including several Emmy awards, a traveling typewriter, the cap Cronkite wore while sailing and a moon rock presented to him by NASA.

Mounted behind glass is Cronkite's application to NASA to be the first journalist in space, a concept scuttled after the Challenger disaster in 1986 that killed the crew and school teacher Christa McAuliffe.

Not getting to space, "was one of his great disappointments in life," Carleton said.