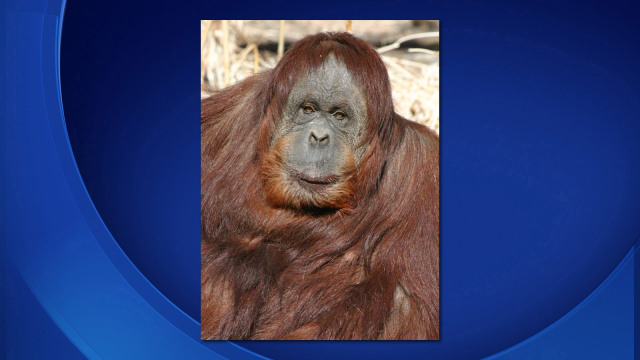 DENVER - Sally, an orangutan at the Denver Zoo, died on Sunday. She was 48 years old.

CBS Denver reports that Sally, a Sumatran orangutan, lived at the Denver Zoo for nearly 20 years.

She had a history of fibroid growths in her abdomen that caused her great discomfort and constipation. Zoo keepers had watched a significant decline in her condition in the past few weeks. Since they were unable to treat her further, the zoo's animal care and veterinary teams decided to euthanize her on Sunday.

The median life span of a Sumatran orangutans in zoos is 28.2 years.

"Sally was the matriarch of our great apes and was a cherished member of our Zoo family for two decades," says Denver Zoo Vice President for Animal Care Hollie Colahan in a statement. "Unfortunately, she had a condition that was causing her pain that she just couldn't heal from and we never want an animal to suffer. She will be missed terribly."

Sally was treated for an infection for the first time in 2008 but it eventually extended to her abdomen. Sally underwent abdominal surgery in 2011 where it was found the infection also included fibroid tumors, CBS Denver reports.

"We were pleased that Sally exceeded our expectations and was able to live as long as she did after her initial procedure. Unfortunately, though, her symptoms returned and we were no longer able to maintain her quality of life. This is never an easy decision, but it was the right one," says Denver Zoo Staff Veterinarian Betsy Stringer in a statement.

According to the Denver Zoo, Sally was born on December 1, 1967 at Cheyenne Mountain Zoo in Colorado Springs, Colorado. She arrived at the Denver Zoo in May 1996 from the Albuquerque Biological Park.

Sally enjoyed interacting with people, especially kids, and became well known with the staff for her tidy habits, such as combing her beard and "cleaning" her enclosure with bubbles.

Sally also loved to paint on canvas and color the walls, floors, hardware and her own face with chalk.