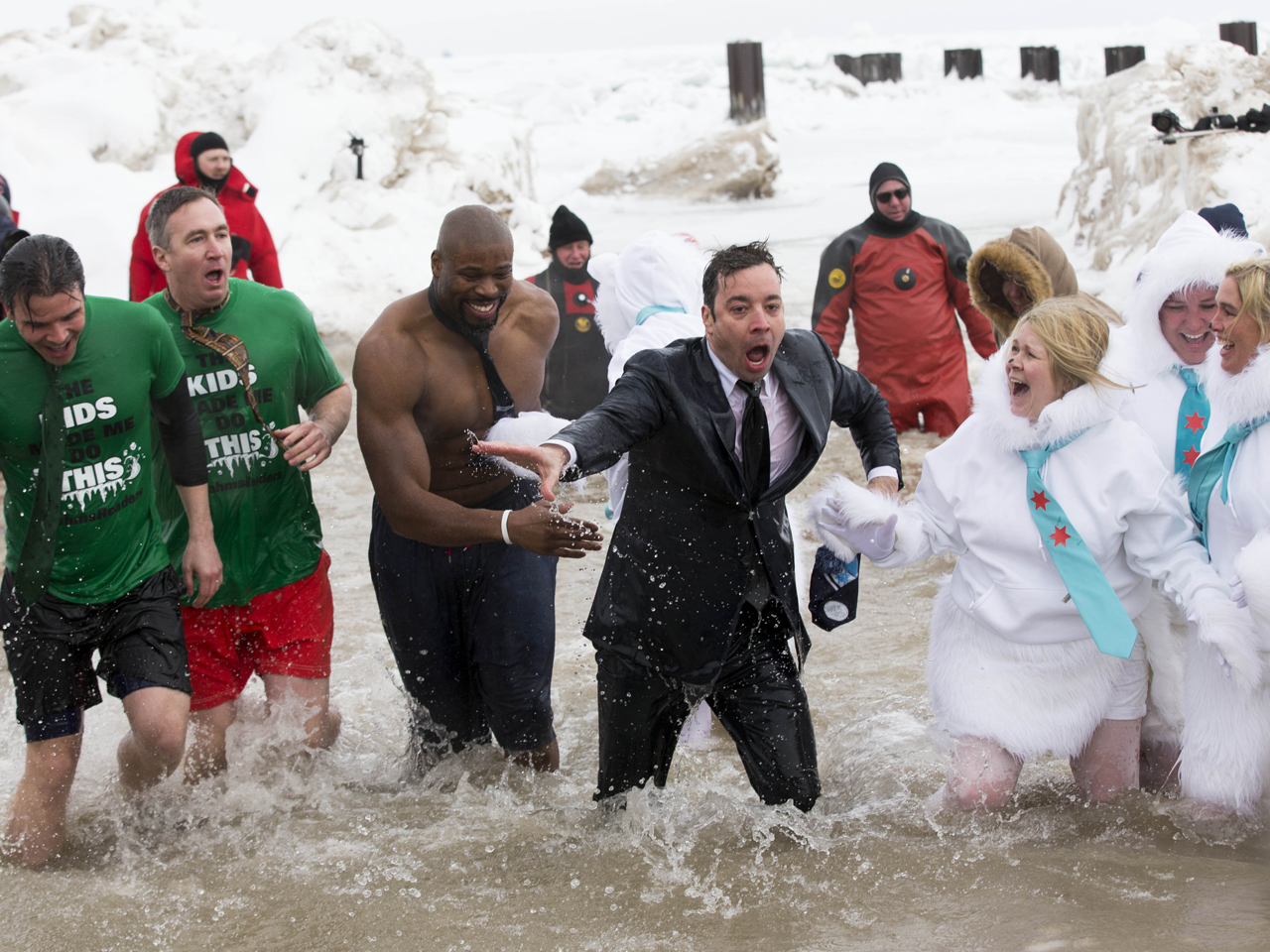 CHICAGO - Comedian Jimmy Fallon took a quick but icy dip in Lake Michigan - dressed in a full suit and tie - then screamed and darted out quickly with a shocked expression on his face.

"The Tonight Show" host made good on his promise to make Sunday morning's so-called "Polar Plunge" with Mayor Rahm Emanuel as a condition for the mayor appearing on Fallon's show in New York, following an exchange of tweets and challenges.

Emanuel, clad in a green Chicago Public Library T-shirt and shorts, went first, followed immediately by Fallon. Both were soaked from head to toe as they fled the water to cheers from a large crowd that had gathered to watch. A group of bagpipers provided the soundtrack for their rapid dash into the 32-degree lake.

The annual event draws several thousand hearty plungers to raise money for Special Olympics Chicago. Scores of people dressed in parkas and polar bear outfits gathered along the lakefront early, hoping to catch a glimpse of the New York-based comedian.

Fans mingled with participants, carrying signs with pictures of Fallon's head. Many were dressed in costumes - including, appropriately, polar bears. It was 10 degrees an hour before the plunge, and Chicago firefighters in red wetsuits waded in before the waves of plungers began, throwing chunks of ice out of the area.

Seventeen-year-old high school senior Marilyn Lamanna and a friend got up at 5 a.m. to snag a spot where they hoped to watch the feat unfold.

"Between Jimmy Fallon and the Special Olympics, it doesn't get much better than that, even though it's super cold," Lamanna said.

Emanuel - dressed in gray Nike sweatpants, a red sweatshirt and an orange hat - talked to reporters about an hour before the plunge. He was flanked by Detroit Lions defensive lineman and former Bears player Israel Idonije and Chicago Public Library Commissioner Brian Bannon.

He got emotional as he talked about meeting the mother of a special needs child in a Chicago grocery store, saying she was grateful for his participation in the event. He said they cried and hugged.

"There are parents out there, there are children out there who have something they can give," he said.

Special Olympics Chicago President Jen Kramer credits Fallon and Emanuel with attracting more than 3,000 people for the run into the lake from the city's North Avenue beach. That's more than ever. Last year 2,300 people did it.

Emanuel said last summer that if city's children read 2 million books as part of a Chicago Public Library program called "Rahm's Readers," he'd jump in the lake. When Emanuel heard Fallon wanted him to appear on the late-night show that he took over in February from longtime host Jay Leno, the mayor called the comedian and challenged him to join in the plunge.

Fallon joked Wednesday that he agreed to make the plunge before realizing what it actually entailed. He also said Emanuel told him he had to "toughen up" before Emanuel would appear on his show. The comedian's followers egged him to do it with a #JimmyPlungeWithUs campaign on Twitter.