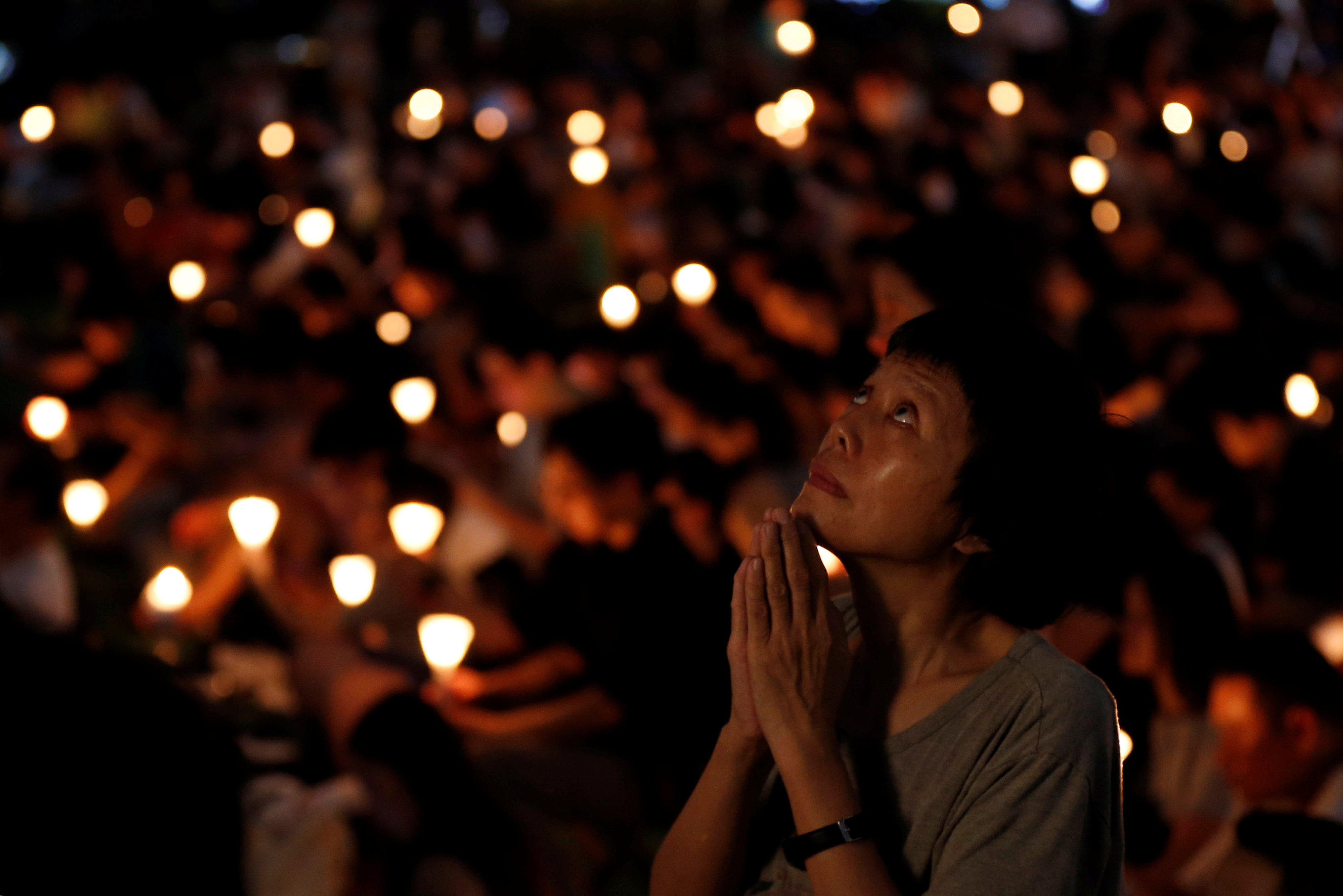 HONG KONG -- Thousands of Hong Kongers attended a candlelight vigil on Sunday to commemorate victims of the Chinese government's 1989 brutal military crackdown on protesters in Beijing's Tiananmen Square, while Taiwan's president called on Beijing to "face up" to the history.

Hundreds if not thousands of unarmed protesters and onlookers were killed late on June 3 and the early hours of June 4, 1989, after China's communist leaders ordered the military to retake Tiananmen Square from the student-led demonstrators. Commemoration of the events, whether public or private, remains taboo in mainland China.

Taiwanese President Tsai Ing-wen said in posts on Facebook and Twitter that 28 years ago, the actions of students and citizens who challenged the political system in China "inspired a generation."

She appealed to Beijing to "face up to June 4 with an open mind" and said Taiwan was willing to share its experiences of transitioning to democracy in the late 1980s to ease the pains of such a transition in the mainland.

"For democracy: some are early, others are late, but we will all get there in the end," Tsai wrote on Twitter.

While mainland Chinese are only dimly aware of what happened at Tiananmen Square nearly three decades ago, the subject is openly discussed in Taiwan, a self-governing island, and Hong Kong, a special Chinese region with much autonomy and legally entrenched freedom of speech and other civil rights unseen on the mainland.

The annual evening vigil in Hong Kong is the only large-scale commemoration on Chinese territory of the Tiananmen bloodshed. Some 110,000 people attended on Sunday, according to organizers, while police estimated the turnout at 18,000. Last year, the numbers were 125,000 and 21,800, respectively.

People held up their lit cellphones - some with pictures of candles showing on the screen - as a band played upbeat songs to rally the crowd and activists gave speeches about the importance of getting young people to attend.

"I don't want this part of history to become blurred," said office worker Emily Yu, 42, who attended the gathering in Victoria Park. "It was really a massacre of people. Those young people came out and did all they could for freedom and democracy but didn't achieve it."

Eloise Wu, 36, who works for a nongovernmental organization, said: "We don't want to let people think we've forgotten, as if with the passing of time it's like, 'Oh, this never really happened.' No. Every year we remember."

In Taiwan, dozens of people gathered at Taipei's Chiang Kai-shek Memorial Hall on Sunday night, observing three minutes of silence as they remembered the victims of the crackdown.

In her posts, Taiwanese President Tsai also called on Beijing to allow a pro-democracy activist from Taiwan who was detained in the mainland in March to "come home." Lee Ming-che, detained on suspicion of conducting activities harming China's national security, has previously conducted online lectures on Taiwan's democratization and managed a fund for families of political prisoners in China.

Relations between Beijing and Taiwan have been near an all-time low since Tsai, whose Democratic Progressive Party has advocated for Taiwan's formal independence, took over as president a year ago. Since then, Beijing has cut off contacts with Taiwan's government and discouraged mainlanders from visiting the island as tourists.

The authoritarian Communist Party rulers in Beijing insist that Taiwan and the Chinese mainland are part of a single Chinese nation and have vowed to take control of the island by force if necessary.