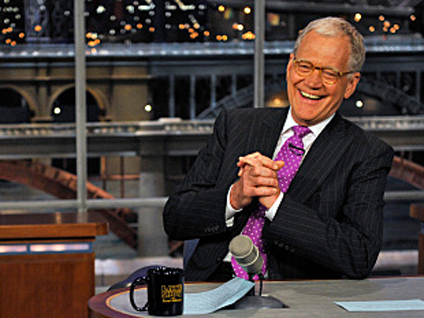 Each has become part of CBS "Late Show" lore through the years, their appearances anticipated by fans like wrapped presents under a tree. The meatball, the Lone Ranger and Love all return Friday.

Comic Jay Thomas will be back to try to knock a meatball off the top of a Christmas tree with a football and recount his Lone Ranger anecdote again. Love will sing "Christmas (Baby Please Come Home)" as fake snow flutters to the stage.

"The best traditions are the ones you can't plan," said Rob Burnett, executive producer of "Late Show."

"These happened very organically on our show and it is very silly and very goofy. It makes sense with the sensibility of the 'Late Show' to be part of our tradition."

Letterman's on-set Christmas tree is frequently decorated with oddities, such as the meatball on top instead of a star, Angel or bow.

It all started one night back in 1998 when New York Jets quarterback Vinny Testaverde was a guest. He and Letterman picked up footballs and began tossing them at the tree, aiming for the meatball. Watching their failures impatiently from the wings was Thomas, former quarterback at tiny Central Piedmont Community College in Charlotte, N.C.

Thomas had discussed trying the target practice with Letterman before the show, but no one told that to stage manager Biff Henderson. He blocked Thomas from going out on stage.

"I fake to the right and Biff goes to catch me and I run around him like a scramble," said Thomas, who picked up a football and threw with laserlike accuracy at the meatball, accomplishing in one throw what the NFL quarterback couldn't in several.

Testaverde has been forgotten, but Thomas is invited back each year to see if he can repeat his feat.

Around the same time -- Thomas isn't sure exactly when -- Letterman heard about a story Thomas told of his time as a radio DJ in the South when he and a friend had to give a ride to Clayton Moore, star of television's "Lone Ranger." We won't be spoilers; Letterman has called it the "best story I've ever heard."

The story, too, is repeated each year. Thomas said he and Letterman have never discussed why it has become a tradition. It just has.

"It is the craziest thing I have ever been a part of," he said.

Thomas practices before each appearance, taking a football into Central Park and aiming at a particular tree branch.

Two years ago Letterman knocked off the meatball with his own throw before Thomas even came out on stage, leaving the comic -- whose acting career has cooled -- to moan in fake distress: "This is all I have!"

Last year, Thomas needed a cortisone shot to make the show after he had injured his shoulder throwing a golf ball. "They're shooting me up like a racehorse to make $760 and hit a friggin' meatball," he said.

He's heard from plenty of people who look forward to his annual appearance, including a well-known Hollywood movie director. The power player, whom Thomas wouldn't name, confessed that he's bipolar and often plays a recording of the holiday show when he's glum. Thomas is glad to cheer the director up. He'd like it even more if he could get an audition for one of the man's movies.

The Darlene Love tradition has deeper roots. Letterman bandleader Paul Shaffer learned early on when he tried to play "Monster Mash" on Halloween that his boss isn't much into holiday music. But Love's "Christmas (Baby Please Come Home)," originally recorded for the landmark 1963 holiday album "A Christmas Gift for You," is "the one place where his and my holiday tastes coincide," Shaffer said. "He loves the song."

Shaffer was performing with Love in Ellie Greenwich's musical "Leader of the Pack" in winter 1984 and Letterman came to see them. Shaffer isn't sure which man had the idea of inviting her on the show -- then televised on NBC -- but everyone was pleased with the results.

The first time, Shaffer accompanied Love with a quartet. As the years went on, musicians were added to approximate original producer Phil Spector's "Wall of Sound," and upwards of 20 musicians and singers have been onstage with Love.

Each year's twist involves how red-suited saxophone player Bruce Kapler will appear for his solo: One year, he burst through a chimney. The widow of famed sax session player Steve Douglas, who played on the original "Christmas (Baby Please Come Home)" recording, sold Shaffer the horn used on that session, and Kapler borrows it each year for Love's appearance.

Letterman's staff has a real emotional connection to the song, enhanced with the passage of time, Burnett said.

"Every year, there's a moment in the song, where she is hitting it full blast and the confetti comes down, just about every staff member -- even the toughest stagehand -- you can see just choking it back," he said.

All of it -- the football, the meatball, the anecdote and the song -- make for an odd mix. But Letterman can be an odd man.

"If Dave didn't enjoy it, it wouldn't be on TV," Burnett said.